A critical concern of our time is not simply our high levels of income inequality and their negative impact on opportunity and mobility. It's how inequality and immobility become entrenched in the system -- how they replicate.

In a nation like ours, where the flow of money into politics keeps getting stronger, one way this occurs is through the political preferences of the wealthy. Of course, at any point in our history, the disproportionate policy influence of the wealthy has been a serious problem for our democracy. But in today's America, two factors intensify this threat: the increased concentration of economic resources, and the increased access those resources have to the political system.

There's yet another piece to this puzzle, however, kind of a riff off the old F. Scott Fitzgerald line about the rich being different from the rest of us (i.e., besides "they've got more money"). What are the political preferences of the wealth and how do they differ from those of the rest of us?

That's the question of this interesting new paper from Page, Bartels, and Seawright (PBS, like the NewsHour!) on the policy preferences of the wealthy. The results they present are from a small pilot study, and in much of the stuff I extract below, they're mixing poll results from various sources. That's always tricky in this work, because simple wording changes or even the same questions asked at different time periods can skew the comparisons. But the authors are careful to be upfront about the limitations, and they still come out thinking they've found some reliable patterns.

Why, for example, does so much of our current debate focus on cuts to social insurance? The first figure provides one intuitive answer: the wealthy want cutbacks. The figure compares the wealthy to the general public on whether they'd like to see federal retirement programs expanded or cutback -- the numbers are the net results of subtracting the "cutback" responses from the "expand" ones.

On Social Security, for example, a net of 33% of the wealthy favor cutting it back compared to a net of 46% in the general public who'd like to expand it (why the wealthy want cutbacks relative to the GP is a deeper question for another day). 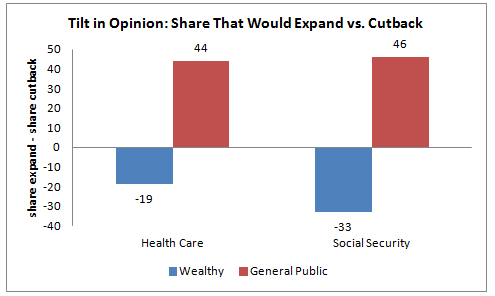 I've been focusing a lot on full employment lately, and recently wrote of the potential importance of direct job creation if the market fails to provide the needed quantity of jobs slots. Table 5 from PBS shows that rich people aren't exactly with me on that one (see fourth and last questions). Only 8% of the wealthy agree that the government should provide jobs for those willing to work but unable to find it, compared to 53% of the general public, a 45 pecentage-point difference.

I was glad to see that some other differences were smaller, especially the ones asking about food, clothes, and shelter, and a decent living standard for the unemployed. One interpretation of these differences is that the wealthy may be OK with helping those down on their luck avoid privation, but when it comes to what they perceive as monkeying around with a private sector function of job creation, that's a bridge too far.

There are many other interesting results in the paper -- give it a close read -- and not all of them are disheartening to progressives. For example, in one timely result, majorities of both the wealthy (58%) and the general public (66%) are "willing to pay more taxes for early childhood education in kindergarten and nursery school" (Table 7). While the budget deficit showed up as a much larger concern to the wealthy than the public at large (providing another example of what's distorting our current debates), that view flips around special circumstances: a much larger share of the wealthy supports deficit spending in recession/war (73%) than the general public (31%, Table 8). And here's a rare point of agreement: about two-thirds of both groups agree that the government has "gone too far in regulating business and interfering with the free enterprise system" (though the question is badly worded-few would agree that "interfering" is a good thing to do; ask about regulating the banks and see what you get).

But the broader point -- in case you didn't know it -- is not only that the wealthy disproportionately influence policy makers.* It's that on some critical fiscal and economic issues, their preferences show less willingness to invest in public education, jobs, and social insurance. Much of what's in here, though not all, would lead you closer to the Ryan budget than the CPC budget.

In other words, many of these preferences of the wealthy will reinforce inequality/immobility-inducing policy and block solutions, making this important public opinion research worth keeping a close eye on. I doubt their opinions will change as they're rooted in self-interest that's pretty endemic to human nature. Thus, the target for democracy becomes their disproportionate influence, and that leads to money in politics and voting rights.

*See Martin Gilens, Affluence and Influence, on this point.