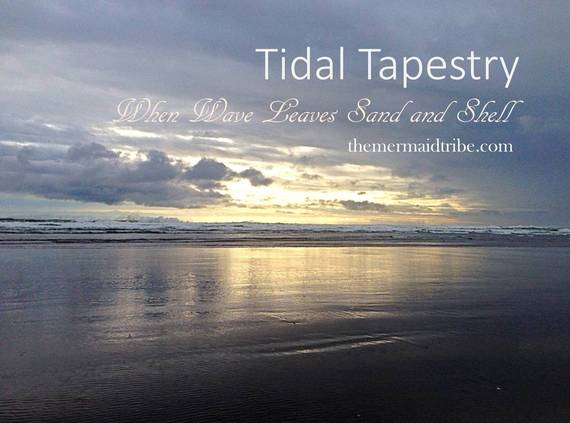 Because there's nothing more beautiful than the way the ocean refuses to stop kissing the shoreline, no matter how many times it's sent away.
Sarah Kay

I took myself away as a birthday treat in spring. I called it my Solo Mermaid Self-Care Surfari.

Like many in New Zealand, I live close to postcard-type beaches with gorgeous surf, sealife and sand, and appreciate it everyday. As things got busy and more demanding with research work, it soon became clear, once again, that the greatest distance one travels is often in our heads.

No matter how many resources there are out there on how to relax (thank goodness there are), often work mode and relaxation mode can feel planets away. I was needing some time to relax and play and be in nature, and knowing I was close to it meant there was no excuse not to go. I vacuumed the inside of my van, packed my clothes, blankets and water toys, and took off to the wild west coast beaches of Muriwai, just two hours away. 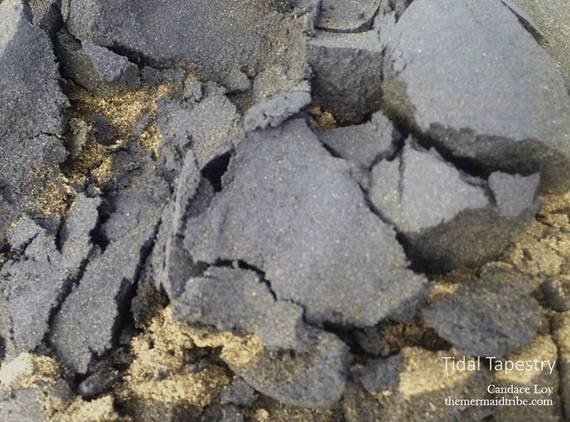 The beaches on the west coast of the North Island of New Zealand are often a beautiful jet black, from titanomagnetite, otherwise known as magnetic ironsand. The titanomagnetite has been brought to the coast via rivers passing to inland volcanoes, and moved along the beaches following the prevailing currents. Click here to read more on how these black sand beaches formed.

On this little solo camping trip, where I got to meet other travellers and long-time residents of the campground in an uncrowded and unhurried (the best!) way, I spent alot of time wandering the beach in between surfs.

It wasn't a hot day in summer, so I got away with wandering the beach barefoot: the black sand gets too hot in the sun and you see lots of people quickstepping into the water on those days. 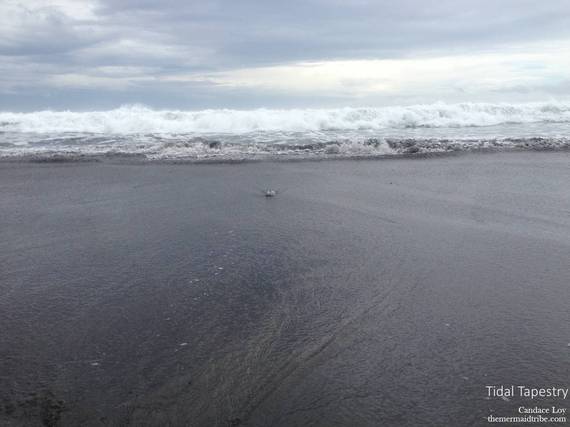 They say to always look where you are going, and to keep your head up, and eyes peeled on the horizon. This is especially true for when you are out in the water watching for bumps and waves, but I got to indulge in keeping my head down and eyes peeled on the sand, watching with quiet fascination at the beautiful art emerging in the sand beneath my toes as the outgoing tide swept thin sheets of water over the beach.

Wave after wave, carrying with it tiny black and silica 'white' sand particles as far as their weight would allow, and as each wave receded it left a pattern that was especially pretty, and you could see where a few successive waves had met and mingled, and your eyes traced where the water rippled, slithered and hugged around each object it met along the way back to the sea, leaving its impression in sand patterns formed around seashells and other remnants of ocean residents.

I shell leave you here to enjoy the beautiful beach art I got to witness happen before my eyes... can you guess in each picture, the direction the water was moving to get back to the rest of the ocean?

Enjoy your little stroll on the black sand beach. There will be a short video at the end where you can see how these patterns form. It's pretty relaxing! 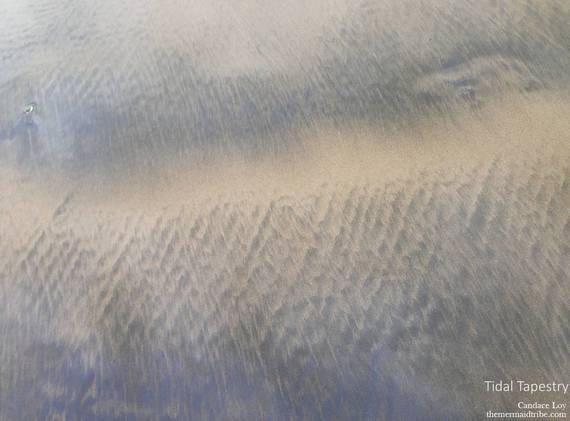 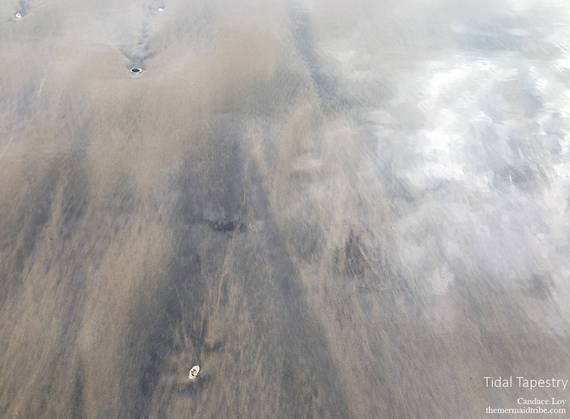 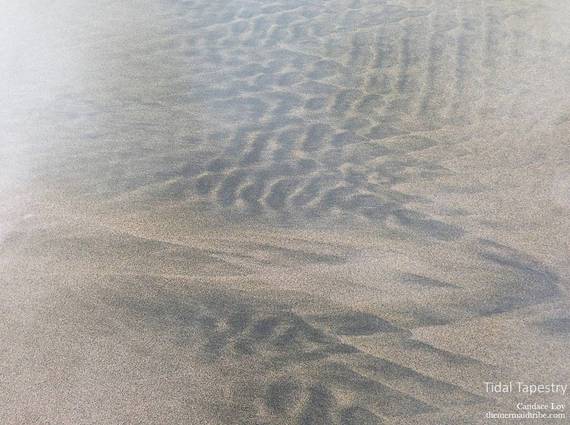 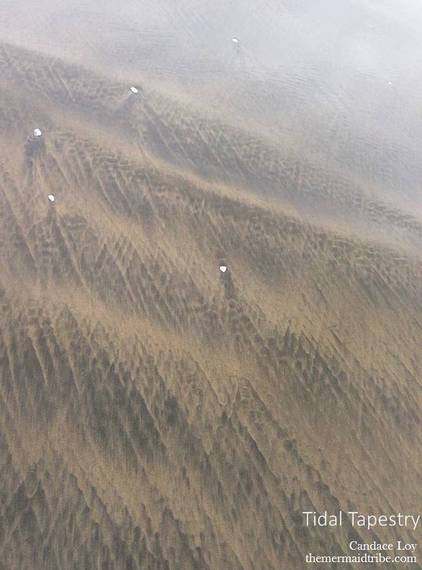 Don't some of these patterns look just like shooting star trails? 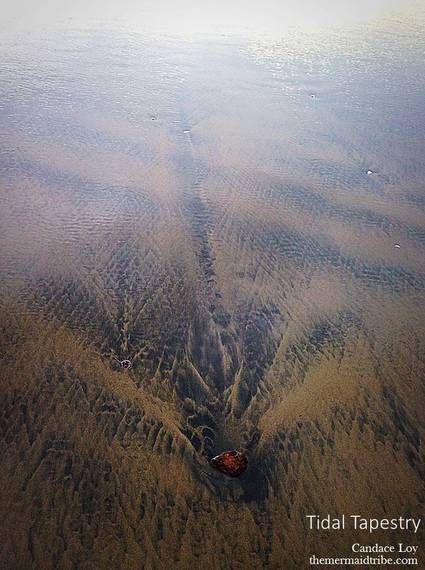 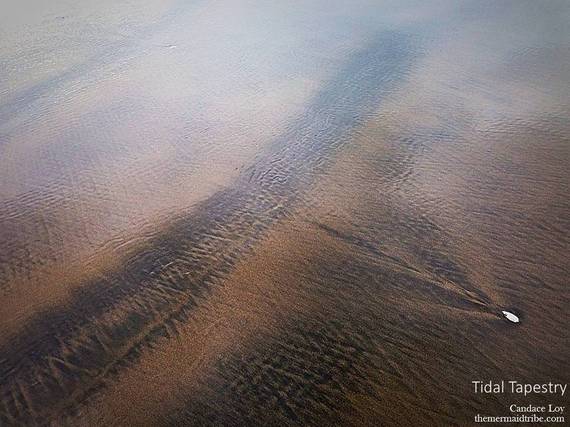 Hope you enjoyed this little stroll on the black sand beach of Muriwai. (More pictures here)

From the footprints it is clear many other people and their pooches enjoy it too!

There's a beautiful video showing how these patterns form here...it's beautiful and relaxing to watch... 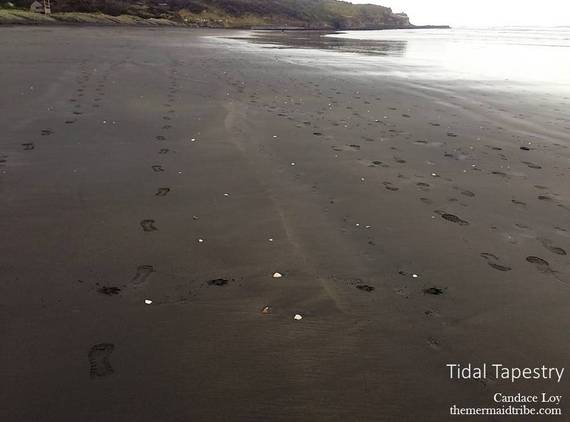 a wave rolls onto shore

and slides over sand

of jet iron and a speckle of silt

mingle in this unavoidable

all encompassing and yet transparent

that starts to leave as soon

as it gets here

leaving only the swirled then settled

in its likeness a

weave so we can see

in the sparkly sun

how it flowed over and around

each bump and shell and grain of sand

to get home to the rest

of the sea only to


Check out the gorgeous, relaxing and fascinating video of how the patterns form on the beach.

Thank you IAMCITIZENJANE for the inspiration to use the quote by Sarah Kay. xoxo

Reconnect to your inner mermaid with this free journaling + self care guide and whimsical mermaid colouring sheet, from http://TheMermaidTribe.com