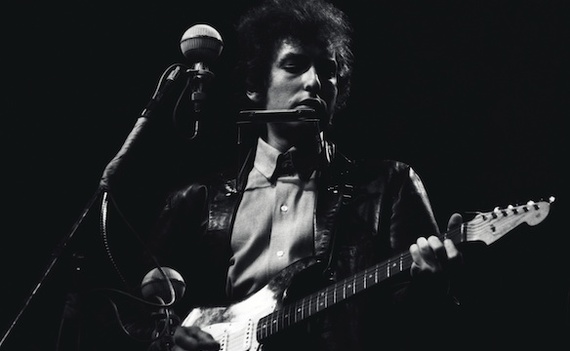 The guitar stood on a stand in a small conference room in corporate offices in Beverly Hills. A black Fender Stratocaster with a white body plate, a few nicks to its side -- it looked simple, basic, uncomplicated.

Yet the story that brings this particular musical instrument to auction at Christies in New York on December 6th has put an estimated value on it of $300,000 to $500,000. Let me venture a prediction: it will sell for $1 million.

The guitar belonged to Bob Dylan. The story goes that he left it on a private plane chartered for him by Albert Grossman, his manager in 1965 (or 1966). Fast forward to 2011, when a young woman, Dawn Peterson, contacted PBS' program, "History Detectives," to ask if they could authenticate an electric guitar she found in the attic of her father's (Victor Quinto) home, a private pilot who died in 1971. Her claim was that Dylan left the guitar on board his plane, that at the time Quinto had contacted Dylan's management to ask if they wanted it's return -- that they had said not to bother -- that they would get Dylan another guitar. And so the guitar stayed in her family until she uncovered it, and she wondered if indeed it once belonged to Dylan and what it was worth.

Suffice to say that Grossman is dead, and Dylan and his family never knew, or else never heard of this offer to return the guitar. The guitar was housed in a traveling case on which was clearly stamped, "Property of Ashes and Sand, Inc.," which was Dylan's production company at the time. Inside was the guitar strap and several handwritten and typewritten song manuscripts. Perhaps others would have made more effort to return what was clearly not theirs. However, as a legal matter, regardless of how the guitar ended up in her possession, under what are invariably referred to as 'finder's keepers' statutes, it now belonged to her.

The "History Detectives" devoted an episode to the guitar in 2012. Andy Babuik of Fab Gear, a guitar expert, examined the guitar's wood finish and the thin lines among the frets and treated them as the fingerprints of the guitar -- matching them to photographs of Dylan at recording sessions and performances of that time and concluding that not only was the guitar Dylan's, not only was it used at the recording sessions for "Bringing it All Back Home", not only was it the guitar used at his Forest Hills, NY performance in August 1965 -- it was the historic electric guitar that Dylan played at the Newport Folk Festival in the summer of 1965, when Dylan shocked the folk world by "going electric" -- certainly one of the most famous musical events of popular music history. 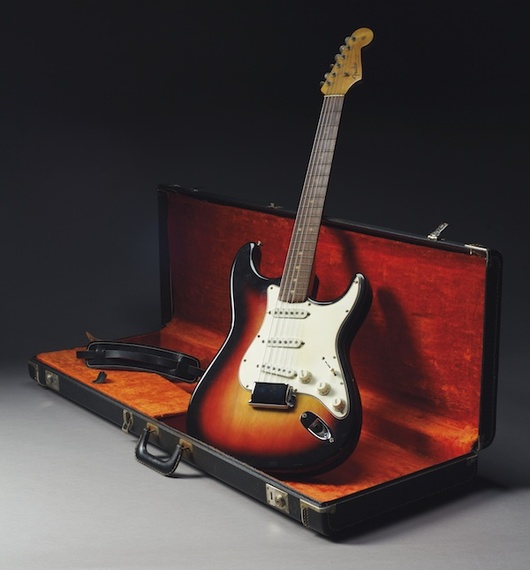 The guitar ready for auction. Photo from Christie Imgages LTD. 2013

The guitar itself is simple. The story that surrounds it, and the occasions on which it was used, rich. My guess, and it is only a guess, is that Dylan in 1965 and 1966 was not carrying his own guitars anymore and was probably not in charge of getting it on and off planes. However, even if he left the guitar on the plane, he would either have assumed someone else would retrieve it for him, or assumed that it would be easily retrieved. No one at the time ascribed historic importance or value to the guitar. Once it was gone, Dylan, in the words of one of his songs, probably "didn't think twice." At the time, Dylan's record company, CBS, owned Fender, and, no doubt, they were eager to supply a replacement.

The guitar is being sold with it's case stenciled, as mentioned before, with the words "Property of Ashes and Sand, Inc.," and the guitar strap inside. The song manuscripts are being auctioned in separate lots, one of which eventually appeared on "Blonde on Blonde," and others appeared on "Biography" and were authenticated by Jeff Gold, a Dylan expert and collector of Dylan autographic material. Christies also engaged these same experts and, once assured of the authenticity of the guitar and manuscript, prepared the items for the December 6th New York auction.

For comparison's sake, one of the highest amounts ever paid for an electric guitar at auction is $959,000 for "Blackie," Eric Clapton's favorite fender Stratocaster, used on "Layla," which he sold to benefit his Crossroads Centre, a drug and alcohol rehabilitation facility in the Caribbean. I'd be surprised if Dylan's guitar goes for less.

Still, if it were up to me, I'd return the guitar to Dylan. That would be the right thing to do. It's his, simple as that.

That being said, I'm not one to begrudge anyone else getting rich by legal means. So here's my somewhat Solomonic solution: Dylan (or one of his representatives) should just buy the guitar back. It's my understanding that in recent years Paul McCartney has been buying up Beatles memorabilia anonymously on eBay and at auction -- because he can and because he prefers to own his own history rather than have others trade on it.

Dylan, I imagine, is less attached to his own things and certainly less attached to his past. Even the film of his 1965 European tour is called "Don't Look Back." So I understand if he has no interest in participating in other's profiting from the sale of what was his. However, that guitar was the sword and the shield that he took into battle, and in the end, he might appreciate his old friend more than the money it would take for its return.

But let's be clear: Dylan going electric would have happened regardless of the guitar, and it's significance has everything to do with Dylan and nothing to do with the guitar itself. Yet it is the stories we invest in objects like this simple electric guitar that give a context, an importance and a meaning to these events. And yes, a value to them as well.