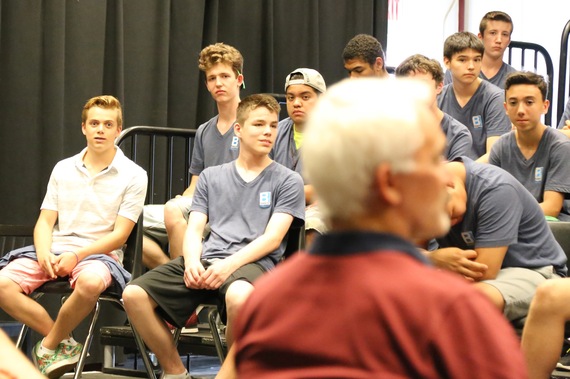 I could see my son was a bit shellshocked. We were driving back from a Boys Club Network (BCN) event where I had just participated in a Q&A session with 40 teenage boys. I had been working with kids in the Boys Club Network for the past 17 years, so it was an experience that I had been conditioned for. My son, however, was unprepared for some of the stories he had just heard. These boys have had a difficult time -- broken homes, gangs, drugs, you name it. They all lacked many of the luxuries most of us take for granted. Most importantly, they lacked the one basic thing young boys need in life, a positive adult male influence that can guide them and give them the tools they need to grow up and become good men. By mentoring and inspiring them, BCN provides just that. I have watched many of these boys grow into young men over the years, and I know firsthand, it's a winning formula.

So, I asked my son if he was okay. His response surprised me. He said he felt ashamed and embarrassed to be sitting in the same room with these boys. He felt they were looking at him and thinking "who is the rich kid and why is he here?". As we talked about his feelings, I tried to convey to him that I didn't think that was the case. Later, I shared some feedback from the boys, where they said how cool it was that I would bring my son to the talk and how they wished they had a dad that would do such a thing. But, as we continued to chat about the experience, we turned to the subject of privilege. My son knows he lives a privileged life. He is loved deeply by both his parents, goes to a good school and participates in many sports and activities. We don't spoil him, but he has certainly never lacked for anything, especially our attention. Since our kids were young enough to understand, their mother and I have been consistent in our philosophy regarding privilege and wealth. Both of us are very philanthropic and we remind our children that it's important to give back. Emphasizing that, the more one has, the more one should do. Many people are privileged and he should not be embarrassed by it. We tell them that firstly, one should never show off with their wealth. More importantly, it's what one DOES with that privilege that matters. Using his mother and me as examples, I went through the list of causes we either operate or support. By the end of the car ride home, my son declared that he also wanted to be a philanthropist when he grew up (I had to point out that philanthropy wasn't a career choice -- he had to earn some money first) and asked if there was anything he could do to assist with the BCN. His spirits were lifted and I was relieved.

I have thought about wealth and privilege my entire life. I resented it when I didn't have it and was also embarrassed by it in the early years with my own success. But I was fortunate to grow into a life of giving, and today I am just thankful I have the means to do as much as I do. I only wish I had the resources to do more. But sadly, not everyone shares that philosophy.

This past summer, I was invited on a trip to the Mediterranean for 10 days. "The Med" hosts several locations that have become the playground for the mega rich, Ibiza, St Tropez, Porto Cervo, Mykonos, etc. On this trip, I witnessed a world I had seen many times throughout my life, but for some reason I was now observing through a different lens. It's here one can see the results of the widening wealth gap in technicolor. It seems to me that the rich are showing off much more than they used to. The yachts and villas are much bigger, the airports feature endless rows of private jets, and the parties are louder and more extravagant -- it all feels quite surreal. 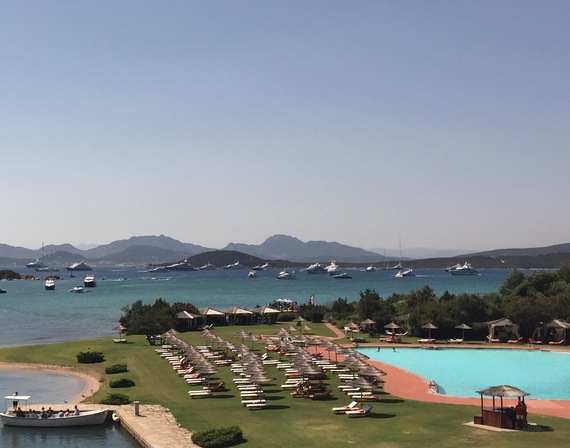 One day during this vacation, I was invited to a typical afternoon club for a late lunch. I dread these places, but was talked into it. The music is deafening and the cramped seating creates an atmosphere that encourages people to drink a lot and dance on tables. At a table next to us was a large group being hosted by a very well-known nouveau riche dude. Apparently, it was his birthday and to celebrate, he had ordered several cases (that's cases, not a bottle) of very expensive champagne. To drink a few cases, would seem extravagant to most people, but what I witnessed next falls into a category that feels like it should only be populated by morons. It has become established custom at these clubs to spray champagne on your friends -- not drink, but simply shake the bottle and waste it just to soak a buddy. It's just a means of demonstrating to those around you that you have the money to afford that kind of behaviour. In other words, just showing off. But with several cases of the stuff!? As they went through this ridiculous ritual, all I could think was, how can anyone be that tone deaf as to behave in that manner when so many people in the world are suffering from poverty, disease and war? We were in Europe, after all, the beachhead of the current refugee crisis -- a stone's throw away from people drowning as they tried escape war and hunger. Did these people not read the news? Were they that far removed from reality? It was a spectacle that clearly exceeded the red line on any obscenity meter. I kept thinking, who raises children to turn out this way? I could never picture my kids behaving this way. I was disgusted. I had to turn and just walk away.

Later, I was in my hotel room, looking out to the bay and I could see it was packed with mega yachts. It was such a sight; I just had to take a photo. I tried to do a mental calculation of the total value of those yachts -- it was a staggering number. The mega yacht world provides a fascinating and bizarre look into the psyche of the very rich. For some of the world's billionaires, it's a constant race to see who has the biggest boat. It seems that if yours is the most expensive, it won't be long before you are surpassed by the next guy. And, you are back at the shipyard and the drawing board. These mega yachts are ranging from at the low end, $200 million right up to $800 million, ridiculous sums of money for something most of these guys only use a few weeks a year. As I looked from my balcony, I wondered if the owners of these yachts ever paused to think of their wealth as anything beyond a show of status. And again, I had to shake my head.

Dear Rich People, no matter how wealth is obtained, it should be looked upon as a great privilege by its custodians. No one is suggesting you should be Mother Teresa and not enjoy your wealth. By all means, go for it (believe me, I enjoy my life). But, there is only so much one can spend before it becomes less about enjoyment and more about status. There is so much good one can do with "excess" wealth. Do your part to help even the playing field. As I said to my son, neither be ashamed of, nor show off your wealth. Use your privilege for the privilege of serving others.