There are camps throughout the West Bank where refugees from the Israeli/Arab wars live. The biggest, with over 23,000 people, is in Nablus. It's across street from Jacob's Well, where Christians believe a Samaritan woman offered Jesus some water and he revealed to her that he was the Messiah. (One of the only surviving Samaritan communities lives today in a tiny, tight-knit group on a hilltop above Nablus.) While the camp's original, three-by-three-meter platting for tents survives, the actual tents were replaced by concrete structures long ago -- and these go up many stories. The density is horrible, and there's little privacy. It's a land of silent orgasms. 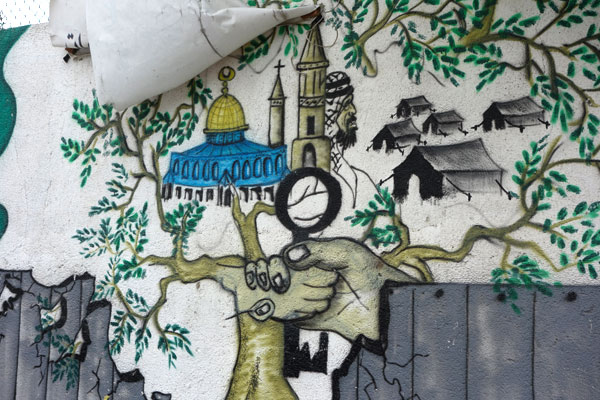 This political art, typical of paintings decorating the wall separating Israel and Palestine, comes with powerful symbolism: Along with the Dome of the Rock (sacred to Muslims), the broken wall, and the olive branch, is a key -- what refugees took with them when evacuating their hometowns decades ago. 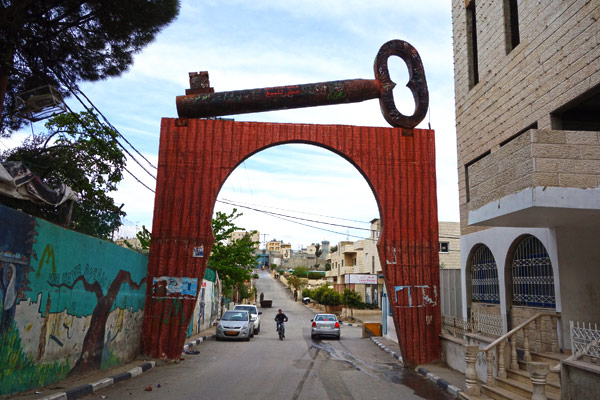 In several places around Palestine you see big keys symbolizing the determination of refugees who left Israel to return to their home villages. 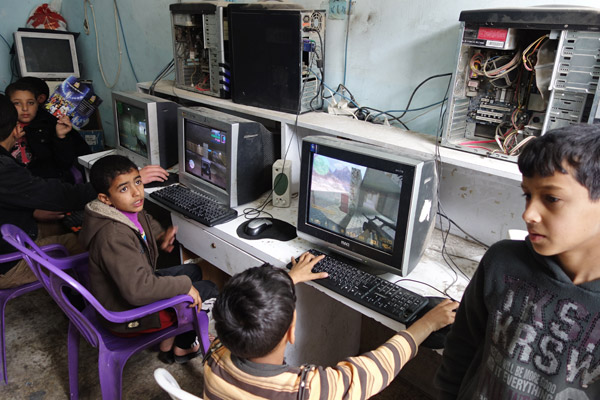 In the very poor refugee camp of Balata kids don't have computers or the Internet at home. But they can spend a few pennies at the Internet shop on the main street. I popped in to see the action. Nearly all the boys were playing violent shoot-'em-up computer games. One cute little boy turned to me and said, "Shalom." Another, just as cute, turned away from his terminal, looked up at me, and said, "F*** you, rich man." Part of me was impressed.

Nablus hosts the Balata Refugee Camp. With more than 23,000 registered refugees, it's the largest United Nations-administered refugee camp in the West Bank, and it's now 63 years old. While most Palestinians would disagree, some point out that Israel has had many refugees and assimilated them into their prosperous society while Palestine -- and the Arab world -- keeps the West Bank refugee camps in squalor in order to stir public opinion against Israel. Others point to the horrible conditions here as an example of the injustice Palestinians are living with every day. Regardless of your perspective, one thing is true: In 1948, when the families now living in Balata left their homes in Israel, they thought it would be for a short time. They locked up and took their keys. They still keep those keys -- and they still hope to return.