According to Travis Price, an award-winning architect and philosopher whose work is rooted in ecology and mythology, most architecture today is just plain soulless. "You go into malls and they float all kinds of Roman columns and fake images. It's Disney. It's superficial. It's mass produced. It's empty."

Price, a fellow of the American Institute of Architects, focuses on restoring the "spirit of place" to modern design by providing an alternative to the "sprawl, mall and tall" trend of generic suburban architecture today, or, as he puts it, "a slow moving Pompei blanketing us with the pursuit of loneliness and homogeneity."

The issue at hand is not simply the "modern box" aesthetic (there are over 1,500 enclosed malls, not even including strip malls, miles of suburban banality and boxed towers in the U.S.) The problem, Price argues, is also that these structures lack an authentic connection to nature and the very cultures in which they exist. This, in turn, leaves us feeling disconnected, isolated and longing for true connections to each other and our communities.

While the problem is complex, the solution, Price says, is simple: We must bring nature back into architecture. "We are made from nature in nature. We miss the rhythms. We miss the hot, cold. The lack of isolation by fossil fuels. The human being needs that. Just like it needs smell and taste."

Nature-inspired structures have a positive psychological effect on the communities in which they exist. According to a Cornell University study, proximity to natural places does indeed have a direct effect on physical and mental health, as well as stress reduction. Structures that are near natural areas promote well-being, and views of the natural environment improve cognitive functioning.

Whether it's the front of your house looking like a certain tradition that evokes something in you, or a very modern piece which can actually -- like jazz -- dig deep in to your psyche and give you whole other experience. There's really almost no difference between the psychology of space and what architects do.

Price, also a professor of architecture at Catholic University, does not just preach his "spirit of place" lecture to students; he actually takes them out into the field, to sites around the globe to assemble new structures. They explore the landscape and the deep underlying stories in it, then create modern architecture in those environments that reflect the stories and the ecology of the specific regions. For the past 18 years, Price has traveled to 18 different locations with 18 different groups of students. Each time, the class has built new structures in an astonishing nine days. Many of the structures have won prestigious American Institute of Architects design awards. Projects have ranged from outhouses in the great northwest of British Columbia based on the spirit of masks, to a floating house in the Amazon River in Peru, to a stargazing temple at Machu Picchu. Price has even led trip to trips to Nepal to build snake shrines and built monuments to 5000 year old epics from Finland.

Most recently, Price and his students won Ireland's Best Municipal Project award for their installation on Inishturk in County Mayo. In nine days, the students built a memorial on this remote, sparsely populated island, interweaving the construction with profiles of the people who live on Inishturk. Emmy winning Filmmakers Judith and Stanley Hallet documented the entire process in a new film, Tale of the Tongs, which will debut at the Environmental Film Festival in Washington, D.C. on March 24, 2014.

The goal with Price's recent installation in Ireland and with each project he embarks upon is to have the modern architecture reflect the stories of the landscape and the local people. "I simply hold up a mirror and I let you look at yourself in it, but I let you look at it not as a mirror, but as a 3-dimensional space that you can walk in," he explains. "And guess what? Just like a church, a synagogue, a mosque, a shrine -- it evokes an emotion in you that touches your ancestors and inhales their enduring landscapes for the first time."

A Look Back at Four Spirit of Place Projects: 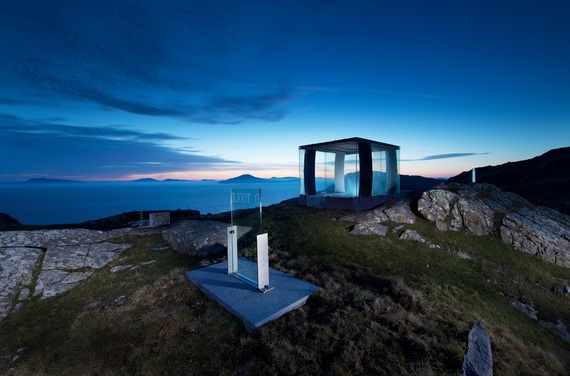 Tale of the Tongs: Inishturk Island, County Mayo, Ireland. This project on a remote Irish island was a celebration of the Gathering of the Irish to come home and water their roots. The tongs are used to handle the hot coals of burning peat in fireplaces. The sad moments in Irish history when someone left on a coffin boat to America or an English coal mine reflects on the act of taking ones last burning coal to one's family or friend's home to place the coal in their fire. One then left one's tongs by that fire on the hopes that one day when and if you might return, you would take back your tongs with a hot coal from the family fire to relight your home fire once again. The project at the island's common celebrates this tale and with it the six remaining clans on the island. 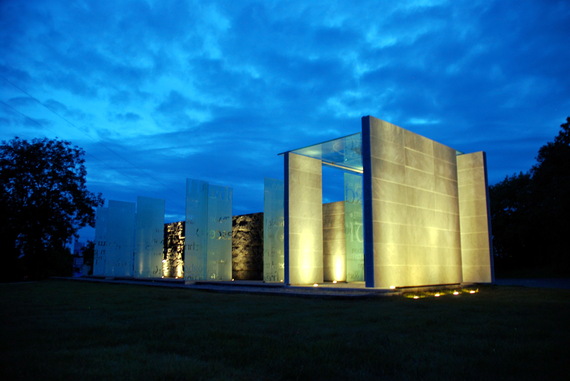 Hoban, County Kilkenny, Ireland. Desart, near Callan. This is the birth site and memorial to James Hoban, Irish immigrant and the architect of the White House. Chosen by George Washington over Thomas Jefferson, Hoban designed and built the White House in 11 years while siring 11 children and his own militia. The project celebrates his struggle, perseverance, and triumph. The original White House drawings are etched in the glass canopy while accolades in English and Gaelic cast etched shadows and tales across the grounds. 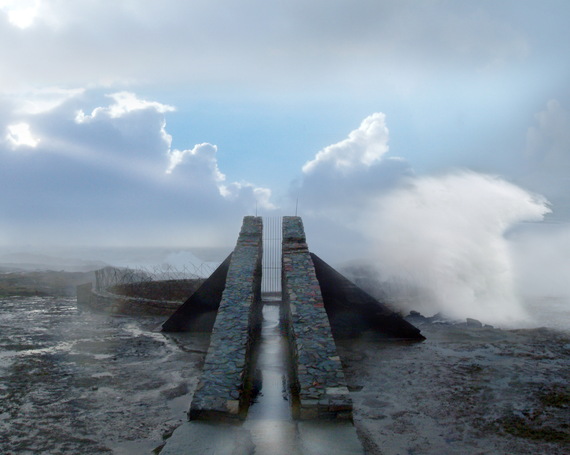 Doonamoe, County Mayo Ireland. Town of Belmullet. The Thin Places are Irish places where time past, present, and future converge. This project envelops a 100 ft deep blowhole by the Atlantic Ocean. The waves are thrusting up over a 100 ft into the air and the thin place walk is aligned to the equinox. 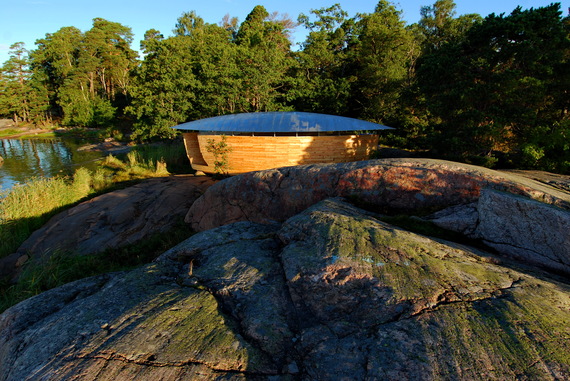 Kalevalakheto -- Seurasaari Island, Helsinki, Finland -- The epic poem of the Kalevala pervades all of Finnish Epics, the Iliad and the Odyssey of the Baltic. So inspired was Tolkien that he moved to Finland to write his masterpiece the Tolkien Trilogy based on the Kalevala. The hero, Vainaimoinen, is the primary musician, mystic and king who is modeled as Gandalf. The Kalevalakheto is the quiet, timeless place to journey into oneself and the deepest history of Finnish character on one of its most historic islands, Seurasaari. The project was a launching event for Helsinki, World Design Capitol 2012.