As far as the rookies, and I know they probably got mad, but I said, "Why don’t you all act like the white guys? You never see them in the paper getting high or hitting people. Why don’t you act like that?" They all looked at me crazy.

Those words were imparted on the San Francisco 49ers rookie class in May by one Charles Haley, a former NFL linebacker and defensive end who will be inducted into the Pro Football Hall of Fame next month. Haley is a mental-health advocate and a man whose heart appears to be in right place. He wants to help the young men on the two teams where he made his mark -- the San Francisco 49ers and Dallas Cowboys -- to grow to become upstanding citizens.

As well-meaning as the remarks might have been, they are still disturbing. Haley, a black man, is placing white men on a pedestal as the moral standard to which all other races should strive. He is dividing the world into “good and white” and “other and bad,” a tactic he said was meant to “shock” the players into paying attention to him. “I think I got my point across,” he said.

The comments are wrong. But they aren’t only wrong because of the obvious issues of pitting races against each other. They’re also wrong because they are based on assumptions that are questionable at best. Let’s break down the the statement.

“You never see them in the paper,” but the reason might be journalistic bias

Cynthia Frisby, an associate professor of strategic communication in the University of Missouri School of Journalism, recently performed an analysis of 155 news articles from a number of online and print news sources. She found that 66 percent of the crime-related stories focused on black athletes, while only 22 percent focused on white athletes.

That discrepancy could possibly be explained by the large number of black professional athletes in U.S. sports, except that she also found that white athletes were many, many times more likely than black athletes to be the focus of stories that were about moral success or accomplishments, despite the many successful black athletes available to profile. That is a stark divide, one likely too large to be explained away by crime rates and socioeconomic factors.

“Journalists and reporters must reflect on how their own unfounded beliefs about race differences in sports likely contribute to the stereotyping of black athletes as engaged in more criminal activity and [being] innately physically gifted yet lacking in intelligence and strong work ethics," Frisby said in a release at the time. "Not only does negative media coverage serve to legitimize social power inequalities, but also it is likely to undermine black athletes' achievements and contribute to stereotype threat."

So yes, while we may see more black athletes in the paper for the wrong reasons, the reasons why remain an area of debate.

“You never see them … getting high," but they do

White Americans on the whole actually appear to do more drugs than black Americans -- they just don’t get arrested for it as much. A slightly higher percentage of white Americans have tried cocaine, hallucinogens, marijuana, pain relievers and stimulants like meth, according to a 2011 survey from the Substance Abuse and Mental Health Services Administration. Yet black Americans are arrested at rates many times higher than white Americans -- more than three times as often, according to a 2009 report by the Human Rights Watch.

“You never see them … hitting people,” but they are

White people hit people, and white people get hit too. A special report by the Bureau of Justice Statistics in April 2014 found that white people were nearly as likely to be the victim of intimate partner domestic violence and more likely to be the victim of violence with their immediate family. (This is not to underplay the enormous problem of domestic violence inflicted upon women of color, but to note that the problem exists everywhere, not just within that community.)

It should be noted that fullback Bruce Miller, who is white, had been charged days earlier by Santa Clara County prosecutors with misdemeanor vandalism for throwing his then-fiancee’s phone in an argument; Miller later resolved the case by pleading no contest to disturbing the peace.

And by the way, you can't explain away the above statistics by saying “Well, the NFL is different.”

There is a crime problem in the NFL, but there is also a crime problem among adult men in the U.S. In a piece for Deadspin in 2013, Reuben Fischer-Baum noted that while NFL players are arrested for like assault and battery and DUIs at rates above the U.S. average, things look a lot different when you compare them to U.S. adult men as a whole. The problem is bigger than just the NFL. The problem, per usual, is men. 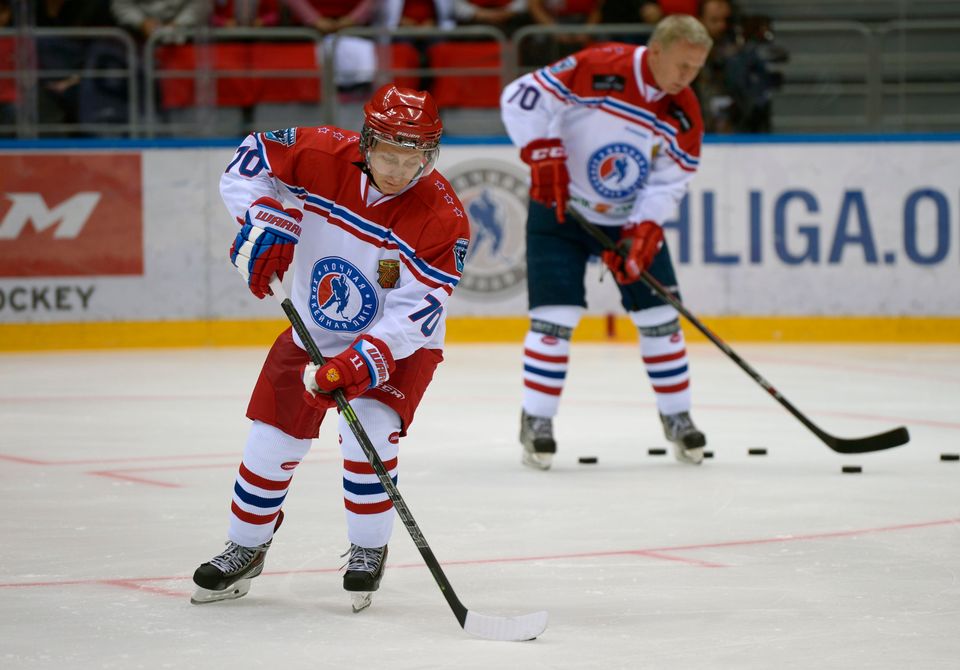 1 / 7
Russian President Vladimir Putin warms up before a game at the Night Hockey League tournament at Sochi, Russia, on May 16, 2015.
AP/RIA-Novoski, Kremlin Pool/Alexei Nikolsky