Cancer. What an ugly word. It seems to be taking over the world- or maybe I'm just getting older and more attune to its presence. Either way, I hate it. I guess everyone hates cancer, though. Or at the very least, no one likes it. Like Creed. (Sorry if you know someone in the band Creed. I'm sure they're all nice fellows.)

My mother passed away from bladder cancer in 2012. Since then, I've known and heard of far too many people who have also lost their earthly lives to this senseless disease. Just a few weeks ago, my little brother's best friend (11 years old) lost his father to brain cancer. I'm positive that anyone reading this also knows- or at least knows of- someone who has passed away from some sort of cancer. Surely, I'm not alone. After all, I see post after post on Facebook of fundraisers, prayers, and heartbreak referring to case upon case. It's exhausting. It's scary. And it's reality. 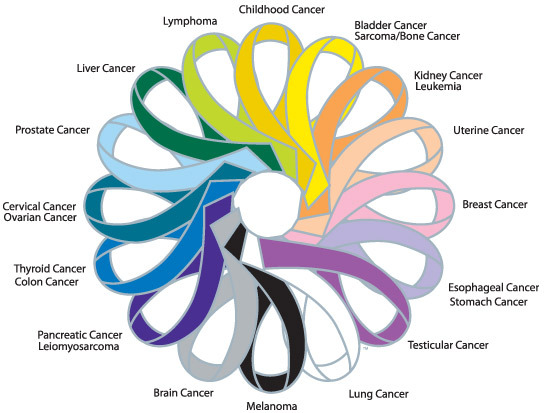 Speaking as someone who has watched cancer take over a loved one, I can attest to its unyielding power and magnitude. Cancer is not reserved for people who fill their bodies with toxins and chemicals. My mother was an exemplary RN, a triathlete, and an avid lover of life. My little brother's best friend's dad was the epitome of health- one of those in-shape dads that 30-year-old single women drool over. Save a change in God's master plan, nothing could have protected either one of them from cancer's wrath. This is why, going against my usual style of not rocking the boat, I'm coming right out to say that I think people need to stop using the phrase "He/she beat cancer."

Perhaps "surviving cancer" doesn't sound as exciting and rousing as "beating cancer," but the latter implies that those who've died lost. Like they did something wrong. I'm not generally one to be overly sensitive to political correctness -- and I most certainly understand that all uses of "beating cancer" are with the best intentions to inspire, motivate, and encourage -- but in this case, it's important to take into account the perspective of individuals "losing" the battle. How do you think it makes them feel when they realize their time is up? When they're told there are no more treatment options? When, save prayer, there's nothing left that can be done? Should they feel like they failed? Like they could have done something differently? No. Never should those thoughts plague their minds.

I remember my mom saying that one of the many difficulties in her time living with cancer was having people try to figure out what she could have done differently. You know, to prevent a giant tumor from growing in her bladder and eventually crushing her organs. "Did you drink too much?" "Did you stand near a microwave?" "Did you not eat solely organic vegetables grown in a garden no further than 10 miles from your home?" She felt like she was constantly defending her life choices (which, might I add, included going to bed at 8:30 p.m. most nights, running seven miles every morning, and only drinking a glass or two of wine on the weekends). But my mom didn't do anything to "deserve" cancer. It just happened. She "fought" it with grace, faith, and dignity. She danced with my brother at his wedding right after a round of chemotherapy. She went to Cedar Sinai hospital in L.A. to have one of the best surgeons in the nation remove her bladder, uterus, and dozens of lymph nodes. She prayed and ate well and continued remodeling the house with optimistic strength. But guess what? Cancer eventually stopped her body from supporting her soul. She did not "lose." She was just not given the opportunity to keep living.

When someone survives cancer, they should be celebrated for enduring such a strenuous ordeal. They should be encouraged with words and hugs and reminders of how much their life impacts those around them. Cancer patients with a will to live that is paired with life's gift to let them live are most certainly inspirational in displaying active examples of the word "hope." And we all need hope. I by no means want to take away from the joy everyone feels when cancer does not end up taking a life. All I want is for people to remember that we are human. We are not God. We do not decide our own fate. We will never understand the reason why some people live and some people die, be it by cancer or a car accident or a bad piece of chicken. No one "beats" death. Some come a little closer to dying than others, therefore understanding mental and physical strength on a deeper level, but make no mistake -- no one is weaker for dying than those who survive. For whatever reason, God decides that a survivor's presence on earth is needed for a longer period of time, and those who pass on have already left the print they were intended to make. Or maybe it's all arbitrary. Though that's a depressing thought... but no less valid in making my point.

Perhaps we should start saying "So-and-so's will to live was granted!" instead of "So-and-so beat cancer!" to remind those on their death beds, loved ones beside them, and the public in general that we are not in utter control of our lives. Yes, healthy choices and positive mindsets are beneficial in reducing illness (hence still commending one's will to live!), but the ultimate outcome is not a reflection of human strength or weakness. It is a reflection of human mortality.

Rather than that realization being a discouragement, we can use it as a stimulant towards leading lives filled with daily gratefulness, sensational vibrancy, and peaceful surrender. In addition to freeing us from the burden of trying to lean on our own, faltering human strength, refraining from the phrase "beating cancer" shows sensitivity towards those who are not given more time or have lost someone they love. Both of those outcomes seem like wins to me!