No matter how badly any of us wanted to wear shorts (or ripped jeans or mini skirts or tank tops or ball caps), it never would have occurred to us (boys or girls) to see these restrictions as a commentary on our dignity. We didn't think our principals were sexualizing us because they were holding us to particular standards of dress (even if we thought the standards were ridiculous).

We hated the dress code. We hated it, but we toughed it out.

But kids today don't have to tough it out. Not only is the school fully air conditioned (thank God!), but students at my high school are now allowed to wear shorts - as long at they aren't too short.

In schools all over the country, students can now learn and socialize in total comfort. Still, when the bell rings on that first morning, and every morning after that for the rest of the year, there will be students who show up to school in violation of the dress code - short shorts, mini skirts, revealing, low-cut blouses, and t-shirts portraying products and activities inappropriate and illegal for kids.

Teachers and administrators will then be placed in the position of having to decide whether to turn a blind eye or run the risk of being called out (perhaps in a way that goes viral) as sexist or as discriminatory. Rather than support school districts in their effort to maintain a sense of decorum in the learning environment, some parents have chosen to encourage their children to buck the system.

In 2015 when Alexi Halket, a Toronto high school student was reprimanded for wearing a crop top to school, she launched a successful hashtag campaign calling on other young women to wear crop tops to school "in solidarity against people making women cover their bodies." Halket argued that girls shouldn't be sent home for dress code violations just because guys can't control themselves. Similar protests against dress codes have been launched all over the country.

The media is applauding these young women as courageous feminists, but there considerable problems with such protests.

For starters, high school is, in part, about preparing for adulthood, and being an adult means following certain standards of dress and conduct in the workplace. This fact alone makes the idea of school dress codes, even those that stress modesty, reasonable.

Most of us don't want our doctor or our bank teller or our children's teachers to dress provocatively on the job. School is a student's job. Why is it okay for kids to dress inappropriately when they go to work? Shouldn't we be teaching our students how to dress appropriately for any situation?

Of course, Helket and others would argue that the very fact that their attire is being deemed provocative is the issue. They want to dress in a revealing manner without their classmates being distracted by this. Unfortunately, we live in a sex-saturated culture. It is impossible to subject young people to a lifetime of pop music, television, movies, and advertising and then expect them not to notice scantily clad students walking down the hall on the way to algebra.

Kids can't even watch a college football game on television without seeing bikini-clad models selling everything from web service to bacon cheeseburgers. Sex sells. The media associates nearly everything desirable in life with sexiness. It's the American way -the shameful, sickening, American way.

The best high school administrators can do is to try to minimize negative cultural influences at school. That is why there are school dress codes - not to sexualize young girls but because they have already been sexualized by our society.

Yes, the sexualization and objectification of women is a problem, but surely there are better ways to help our daughters change the culture than encouraging them to defiantly bare their bellies. If this generation of young women would use some of their anger and energy to take on the entertainment and advertising industry, they might someday make real progress in the fight to empower women.

Another way to empower women is to help our daughters move beyond the victim mentality. It's true we live in a world where women are often oppressed or treated unfairly. But not getting your way doesn't make you a victim. If we teach our girls to cry foul just because they can't wear whatever they want to school, we are doing them a huge disservice. Worse, it's an insult to every woman who has ever truly suffered from sexism or inequality.

The "right" of teenage girls to wear a mid-drift revealing tops to school pales in comparison with the real struggles women around the world face every day. These hashtag campaigns are more like first world problems gone viral than a real contribution to the cause of true feminism. 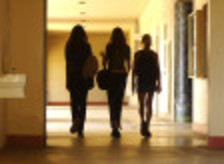 More:
Parentsdress codesFeminismempowerment
Newsletter Sign Up
Raise the kind of person you'd like to know
Subscribe to our parenting newsletter.
Successfully Subscribed!
Realness delivered to your inbox