Two words that lie subtly at the root of so much virtual drama. Time and time again, I find myself at the center of an all-out Internet milk storm... with naysayers from every direction descending to convey their utter distaste at the very thought of nursing a child who has the ability use a sippy cup...

But if we step back from The Crazy for just a moment, we'll find that nursing past infancy is not only apparently biologically normal, but also a medical recommendation that is supported worldwide. The American Academy of Family Physicians (AAFP), for example, state the following:

"As recommended by the World Health Organization, breastfeeding ideally should continue beyond infancy, but this is not the cultural norm in the United States and requires ongoing support and encouragement. It has been estimated that a natural weaning age for humans is between two and seven years. Family physicians should be knowledgeable regarding the ongoing benefits to the child of extended breastfeeding, including continued immune protection, better social adjustment, and availability of a sustainable food source in times of emergency...There is no evidence that extended breastfeeding is harmful to mother or child...If the child is younger than two years, the child is at increased risk of illness if weaned."

So if the medical profession support full-term breastfeeding, what exactly is the problem with nursing past infancy?

There is, quite simply, only one problem with "extended" breastfeeding and it all comes down to semantics.

Yet, as we can see from the AAFP's statement above, continuing breastfeeding past infancy is actually something so worthwhile that it "requires ongoing support and encouragement." Add to that the fact that the World Health Organization recommend that breastfeeding continues "up to two years of age or beyond", and the disconnect between the biological norm and the cultural norm for breastfeeding duration becomes ever more apparent.

And if you don't believe me, just take a look at Lansinoh's 2015 Global Breastfeeding Survey results. This survey canvassed the opinions of over 13,000 moms worldwide, covering every angle of breastfeeding... from the importance of maternity leave to the frequency of moms facing harassment for nursing in public.

Thankfully, Lansinoh didn't shy away from the subject of nursing past infancy. Yet the results, albeit expected in our current social climate, still made my heart sink a little:

Too old to breastfeed... when I read these words, I see each one rooted in fear. Fear of the unknown. Fear of social judgment. Fear of stepping outside of our cultural norm and into our biological norm instead.

Not surprisingly, these fears are culturally-specific. They are derived from a place of limited understanding, limited support and limited exposure.

Yet if we collectively understood the benefits of nursing past infancy, full-term breastfeeding might be seen as something to celebrate instead of something to shame.

If we were supported to breastfeed, as we are by our mama tribe and by pro-breastfeeding companies such as Lansinoh -- with no restrictions or limitations -- full-term breastfeeding might just lose its cultural shock-factor.

And yes, if we increased our exposure to full-term nursing, if we actually saw it, spoke about it and accepted it as a part of life; we might not even think to notice it anymore.

So allow me to kick-start the process. Below you will find pictures of moms, breastfeeding their children. Below you will see examples of nutrition, nourishment and connection. Below you will witness real life nursing, without drama and without shaming... oh, and the children pictured happen to be over the age of 2.

Because this is normal; this is full-term breastfeeding...

Thank you to each of the moms below, for allowing me to feature their pictures in this piece. For more photos in celebration of breastfeeding and motherhood, join the Mama Bean village on Facebook! 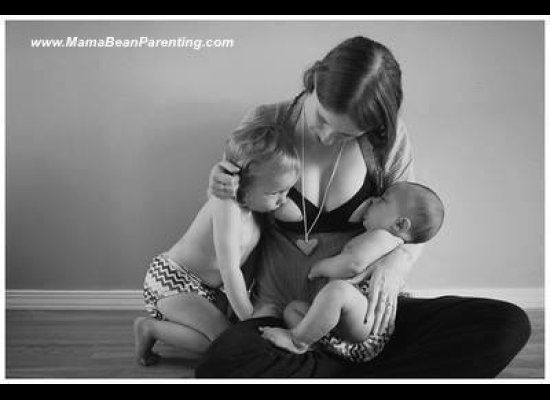