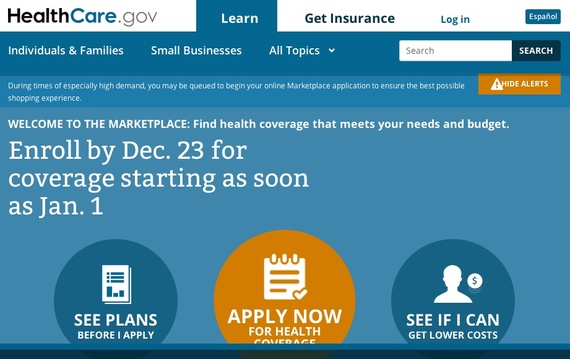 The website is broken. It's difficult. It has bugs. It crashes. It's full of incorrect data. There are endless reports of a URL that is failing the country, but does anyone really know what it's like to be an active participant in the new healthcare exchange?

If you don't currently have health insurance or, like me, if your current health plan is dropping you at of the end of the year, then this coming Monday is your last day to sign up for Obamacare in order for your benefits to begin when the clock strikes 12:01 a.m. on New Year's Day. And, after March 31st 2014, the government can and will penalize you if you still do not have the mandated health insurance. (Although more recent changes suggest you can get around this by having only catastrophic coverage.)

President Obama needs 7 million people, out of the roughly 317 million people currently living in the United States, to enroll in this new exchange in order for his grand plan to be a financial success. That relatively small number means that most people reading this will not have to deal with this nationwide exchange; 97.8% of Americans won't lie awake at night wondering if the plan they chose is adequate, if the healthcare provider will pay their claims (without coming up with inconsistent reasons not to), and, most important of all, if they'll get quality care from their new physicians.

We can trace the high cost of healthcare, and the introduction of health insurance, to 1915 when, under stricter regulations to improve healthcare, the number of medical schools and doctors plummeted. In 1939, Blue Cross, one of the first healthcare providers, initially a non-profit, charged low costs that members could use to cover their emergencies. Then the market opened to include commercial providers, who charged premiums for different levels of risk, and Blue Cross began to charge the same premiums in order to compete in the new marketplace. Competition, instead of lowering the public's costs, actually raised it.

Flash forward almost 100 years and we're once again at a historical time for managed care. I'm a Type 1 Diabetic, which means that for the past thirty years I have been labeled with a pre-existing condition. But now, under the new exchange, the only pre-existing checklist the government referred to was my income, gender, and zip code. This should be good news to me, but it's not.

I pay $453 for my current plan through Aetna. President Obama told me that if I liked my plan--which I sort of do, I could remain on it. When I investigated this claim on the Healthy New York website, the exchange I bought my insurance through, it stated their coverage would end along with 2013. Faced with this news I went back to the website to investigate my options.

Nine. That's how many healthcare providers I was offered in the state of New York. That's compared to about sixty possible providers. Of those nine, I was familiar with two: Blue Cross and United, the costs of which were so far out of my reach that I could not consider them. That left me with seven. I called my doctors to inquire if they were taking part in Obamacare and was met with the same answer: no.

But, here's just one of my questions: why is only 2% of the nation required to take part in Obamacare? Why isn't everyone included, from government (who have their own plush insurance I imagine) and city workers to big business and more? In other words some form of an easily opted in universal healthcare system.

What I am proposing shouldn't be deemed as ridiculous because it's already happening. In September, Walgreens corporation decided to move 120,000 employees to a private health insurance exchange rather than providing coverage directly from providers. The problem is it's private, amongst an outcropping of other private exchanges being utilized by equally large companies, like Sears Holding, Time Warner, General Electric and more.

Is it possible to consider a single nationwide marketplace that would include every healthcare provider, every doctor and every hospital, so that people like me, people willing to foot the bill for better care, can and will. And people wanting lesser plans can go that route. If we shoot for enrollment numbers larger than 7 million, with less granularity about who's on this and what's on that, won't we all have better plans to choose from? Won't an even larger enrollment, and a more inclusive socio-economic demographic, mean we force the issue and make the business of health insurance better?

Anyone working their way through the Obamacare application process, if they cared to look deeper, would find out that there was little to no data on the providers. Easy stuff like how many doctors are in their network, what hospitals they use, and where you can pick up your prescriptions, are not even a mention on nystateofhealth.ny.gov. For each unknown provider, a curious applicant needed to go to a 3rd party website for additional research.

With technology booming, and new websites and apps launching daily, where is the Yelp for healthcare when we need it? Also, why wasn't a network of provider information and personal reviews considered an integral part of the website launch plans? How do I choose a healthcare provider when I don't know their stats?

In the end the website, though spare in information, worked just fine. I guessed at my 2014 income, and I received a tax credit. My new plan will cost $286 a month--significantly cheaper than my current plan. But I'm still left with a bad taste in my mouth. I can no longer go to the doctors that I know and like, I can't go out of network and who knows what other unknowns are out there waiting to trip me up. President Obama, if you're listening, I think you ought to start at the top and join me in registering for Obamacare. If you hurry you can still make the deadline.