"...my opinion is that it's certainly best to separate an artist far enough from his work, so that one does not take him with the same seriousness as one does his work. In the final analysis, he is only the precondition for his work, its maternal womb, the soil or, in some cases, the dung and manure, on and out of which it grows - and thus, in most cases, something that we must forget about, if we want to enjoy the work itself."
~ Nietzsche, "The Genealogy of Morality"

Twenty years ago at a quiet hour of the early morning when most rational people were fast asleep, I inadvertently purchased some spare meth from an exotic dancer in Las Vegas. I thought I would soon be happily snorting cocaine (yes, I am aware that cocaine is not much better for one's health than meth - blame it on youth), but as soon as the powder touched the lining of my nose I knew that I had made a terrible mistake. It was too intense of an experience for me; I thought that my heart was going to beat through my rib cage and explode out onto my chest. I spent much of the next few days begging God to kill me. She did not oblige. She informed me that she had other plans for me. And for my redemption.

Aaron Sorkin seems to thrive on the very intensity that I have spent the past twenty years avoiding. Much of the dialogue in "Steve Jobs" made me feel as if I were standing too close to a Jackson Pollock painting. There were three or four conversations coming at me at once and keeping track of the threads woven through the three acts/scenes was an intensely demanding experience. 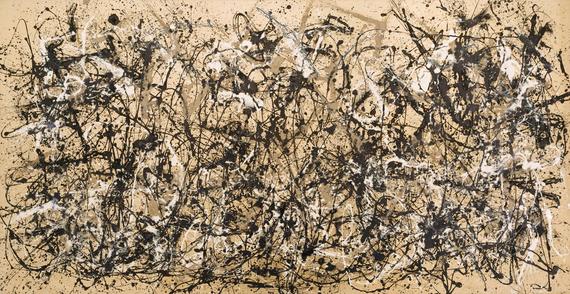 I don't think I have much in common with Aaron Sorkin. I doubt that he ever inadvertently bought crystal meth... it is really quite a stupid error to make.

And so my redemption has come over the last twenty years through helping others avoid making the errors that I made in my youth.

In my workshops I teach that our minds work in black/white, either/or, yes/no. That is how our minds make sense of reality, which is inherently amorphous. By putting things in neat little binary boxes.

And yet one of the greatest discoveries of physics in the 20th century is that light exists as both a particle AND a wave.

Steve Jobs' legacy as the greatest visionary of our generation is unassailable. But what Aaron Sorkin is asking of the audience may be too intensely demanding for some viewers. For are you willing to entertain the possibility that the greatest visionary of our time was also a Machiavellian sociopath - a man thoroughly devoid of empathy or even sympathy for others, even his own offspring (or maybe especially his own offspring)?

Is it too difficult for you to digest that Steve Jobs' "genius" was primarily as an aggregator, that most of the brilliant ideas he supposedly had were appropriated (stolen) from others and he refused to credit those people?

And will you go one step past the film and entertain the possibility that a genius' bitterness about being given up for adoption caused him to get cancer and die unnecessarily at an early age?

Leaving the theater in Santa Monica after seeing "Steve Jobs" for the second time, I noticed that every individual on the promenade was carrying an iPhone and most of the people sitting in cafes were working on MacBooks or iPads.

When I went to film school in 1994 I was dependent on scores of people and very unwieldy equipment to produce my films. In the last 5 years I have produced five feature length DVDs on iMac computers with the help of 2 director/editors: Dalan McNabola and Alexandra Lipsitz.

So why is it so difficult - nay, impossible for some - to believe that he was a relentless prick who trampled on or manipulated everyone around him to execute his vision of the future?

These are some of the themes that our Shakespeare, Aaron Sorkin, chose to explore in his artistic masterpiece "Steve Jobs" and this is also why some people are having a problem with the movie.

This is a dark portrait of a profoundly psychologically damaged man whose compensation for feeling unwanted as an infant was to crush everyone around him into admiring his brilliance.

But at what price?

If you could only be EITHER admired or loved, which would you choose?

Obviously all of our lives would be impoverished if Steve Jobs had chosen to be loved rather than admired, and yet, Aaron Sorkin gives Steve Wozniak the beautiful particle/wave dagger: "It's not binary: you can be decent AND gifted."

Because audiences also think in black and white and appear to be unwilling to explore the woo-woo, anti-scientific, Californian belief that rancor, bitterness and resentment ultimately manifest as cancer, this film remains as precocious as its inspiration, Steve Jobs.

If you want a biography of Steve Jobs then I recommend Walter Isaacson's book; and if you want to wrestle with an intellectually challenging artistic masterpiece then go see the movie "Steve Jobs," which would be an excellent replacement for the SAT exams, for it rattles our paradigm and provokes us into sitting uncomfortably with our EITHER/OR thinking.

Anthony Hopkins won the Academy Award for Best Actor as the fictional character Hannibal Lecter, but I fear that Michael Fassbender will be robbed of the same award because none of us want to believe that the greatest visionary of our time was Hannibal Lector without the Chianti.

Thus, when Aaron Sorkin wins the Academy Award for Best Adapted Screenplay and Kate Winslet wins for Best Actress, I am sure that they will have the decency to do the one thing that surpassed the limitations of Steve Jobs' immense capabilities: choosing to be loving over choosing to being admired.