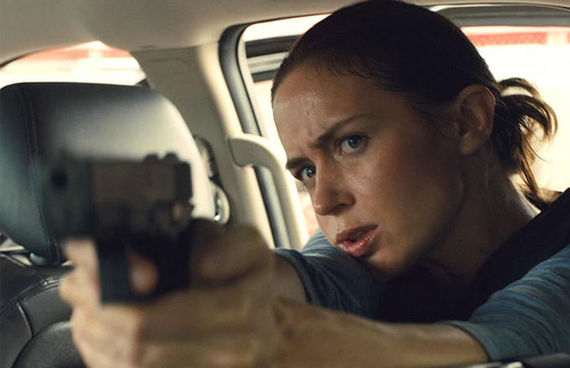 In a September blog post about Emily Blunt's role in Sicario, I asked whether women taking up arms alongside men in TV and film is the kind of equality we really want. I've been asking this for some time. A few years ago, one of my friends answered by saying that, as long as so many of our movies and TV shows involve action heroes, she wants some of those heroes to be women. Sometimes I've just avoided the issue. In a recent post about the work of a playwright, I omitted the following exchange:

"How important is it to have strong female lead characters like Rosalind [Franklin]?"

"Hugely important! And it's also important, I think, to show scientists (and female scientists) as human beings."

Something is askew here: The notion that strength is the main thing we want, or need, or care about. Though the word "strength" can be vague or misleading, it doesn't help to change terms and propose that we want women who are agents rather than mere instruments or objects. From the standpoint of engaging writing, we don't usually want passive characters of either gender; the advice is common in critiques of scripts and other narrative forms. Note that this is not a question of an accurate representation of the world. To some degree, many of us, men and women alike, feel ourselves to be passive objects acted on by other persons, institutions and forces; that was an implication of the Occupy movement. Even there, though, the point was clear: the Occupy movement represented an active response, an attempt to turn a condition into an action.

What's really at stake is a broader issue, which touches on what kind of people we want to be as well as what kind of characters we want to see in film, TV, and elsewhere. A remark made in another context may illuminate this. At the end of Susan Sontag's response, published in The New Yorker, to the attacks of September 11, 2001, she wrote:

"'Our country is strong,' we are told again and again. I, for one, don't find this entirely consoling. Who doubts that America is strong? But that's not all America has to be."

Unlike the situation Sontag was describing, we might doubt whether women are strong, in certain senses of the word. As a group, American women aren't represented at the top level of many corporations; they earn less than men; they're under-represented in the fields of science, technology, engineering and mathematics just as they are at the higher level of film directing; America, unlike many other democracies, hasn't yet had a woman head of government; and so forth. But the point remains: Unless you broaden the term past all recognizing, strength isn't enough. Nor, I might add, is it the only thing we want in a man, either in real life or in arts and entertainment.

Our talk -- and perhaps our thought -- about these matters falls too readily into cliché, received wisdom, conventional usage. Rosalind Franklin, the X-ray crystallographer who contributed to the decoding of DNA's structure, and whose role in that discovery was dramatized by Anna Ziegler, was not simply strong. Franklin's basic intelligence, her training, her curiosity, her rigorous "methodicality," her dogged determination, her ingenuity, all were involved in the role she played. (It's Ziegler I quoted above. As a playwright she understood the breadth of Franklin's character; in the quotation, she may simply have been trying to please the interviewer.) Many of those qualities were shared by Ada, Countess of Lovelace, a brilliant 19th-century woman who's been called the first computer programmer, and who's the subject of a new play by Lauren Gunderson. (Ada also figures into a current show in New York.) But one does not imagine that Charles Babbage, the 19th-century inventor whose computing machine eventually inspired Ada to write that program, said to himself one day, "What this project needs is a strong woman. Who fits the bill?"

I've been saved from the task of discussing further what we really do, or should, want from women in film by an essay that Francine Stock published in the Financial Times, simply titled "Women and Hollywood." Ranging deftly across an entire century, it discusses varieties of willful, unpredictable and complex women, while also assessing the Hays Code retrenchment and the curious case of recent, pseudo-feminist films such as Trainwreck.

Stock's essay touches on Sicario, the recent film that set me off, but it neither values the film for (what I gather is) Emily Blunt's presentation as some kind of ethical center nor faults it because her power seems to come in the form of a weapon. Stock is content to praise Blunt's character for not being defined by romantic relationships with men while blaming the film for not showing us any other named women. No matter -- that's just one film.

[Carey] Mulligan recently expressed distaste for the description of certain female characters as 'strong,' as though strength were an anomaly. Film needs more complicated women onscreen, whether forceful, pusillanimous, devious or whatever (preferably all the above and more). The fact that an actress doing a 'make-up free' photo shoot attracts front-page headlines suggests an era still craving airbrushed images and characterization. That compact, the enduring 'daydream for the dissatisfied,' is the one that audiences and film-makers must be strong enough to break.

(This essay was originally posted, with a few wording differences, on my personal blog. Photo: Emily Blunt in Sicario, courtesy Lionsgate.)