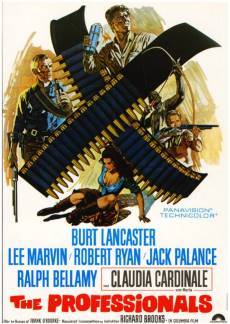 It takes no great insight to observe that all art—and the movies are no exception—reflects the predominant cultural biases of its era. So, how does this Western stack up after 49 years? Let's take a look...

Helmer Richard Brooks put together a mostly strong cast, wrote decent dialogue, and utilized the talents of legendary cinematographer Conrad Hall, to tell the tale of four soldiers of fortune, hired by a mining baron to recover his kidnapped wife. Set in the desert of the Southwest and Mexico, against the backdrop of Villa's revolution, the film explored a theme, popular at the time, of what happened at the end of the "Wild West" era.

The conceit here is interesting: As long as open range and cowboys exist, some elements of the Old West are still with us. Besides, much of what we think of in this context was framed by writers, and true-to-life characters such as Wyatt Earp, who were certainly the real deal, even if they exaggerated their exploits. My feeling is that the bit about the end of the West was a metaphor for the whole 1960's ethos of breaking barriers with civil rights, women's lib, and other causes of the day. That is, it symbolized the end of an era—the era of repression.

The team consists of explosives expert and general miracle worker Bill Dolworth (Burt Lancaster), tracker par excellence Jake Sharp (Woody Strode), and grizzled wrangler Hans Ehrengard (Robert Ryan). The men will be paid $10,000 each for their efforts, a huge sum in those days for nine days work, but cheaper by far than the ransom. Grant's choice of Rico is no accident. He used to ride with Raza, as did Dolworth.

The job will surely be no picnic, as they have to penetrate deep into Raza's territory. Although they encounter dozens of Raza's men, and have to attack the hacienda where the woman is being held against horrible odds, they are able to rescue Maria.

The twist is that Maria doesn't want to be rescued. She and Raza were childhood sweethearts, even if the casting of the nineteen-year-older Palance makes this less than convincing, and, upon reflection, far from wholesome. Her marriage to Grant was a payoff, and her heart was never in it. The fake kidnapping and real ransom demand are simply a way to raise money for Raza's efforts, the more usual pillaging presumably falling on hard times.

Despite this revelation, Rico and the boys are unmoved, and the captive Maria is taken back to Grant, thus setting up the double twist: Noting that he is accomplishing his mission to free Maria from the bad kidnapper, Rico sets her free to rejoin Raza.

Here, the evil capitalist is foiled, and true love and freedom win the day. This played quite well in 1966, despite obvious problems with the story.

The notion of four mercs giving up a young fortune to please a quite unlikable woman, after they had already brought her home, is ludicrous. Combine this with the unbridled carnage necessary to accomplish her extraction, and Rico's character arc is rendered absurd. But, it did give Brooks a way to satisfy both the blood lust and social conscience of his audience, in a manner that today would be laughed off the screen by most critics.

Maria was supposed to be the liberated woman, but merely becomes the tool of a different type of man. Just as troubling is the character of Chiquita (Marie Gomez), a courageous fighter who loves Raza, and even dies for him, all the while knowing that Raza's heart belongs to Maria. Chiquita is also remembered for a partial nude scene, one of the earliest to be approved by the MPAA.

One more thing. Numerous reviews of this pic opine that the extraction team was "double-crossed," by Grant—a strange application of this term. Grant was more than willing to pay the team, and would likely have had more jobs for them in the future. If anyone was a double-crosser, it was Rico, who effectively sold out his compatriots.

Grant's motivation is never developed. With his money, he could have had his pick of Mexican hotties, so why fixate on Maria? Was it a control thing, or maybe he was really in love with her?

That's why this one fails in the third act. Watch it to see some old pros in (or just past) their prime, and forget the story.