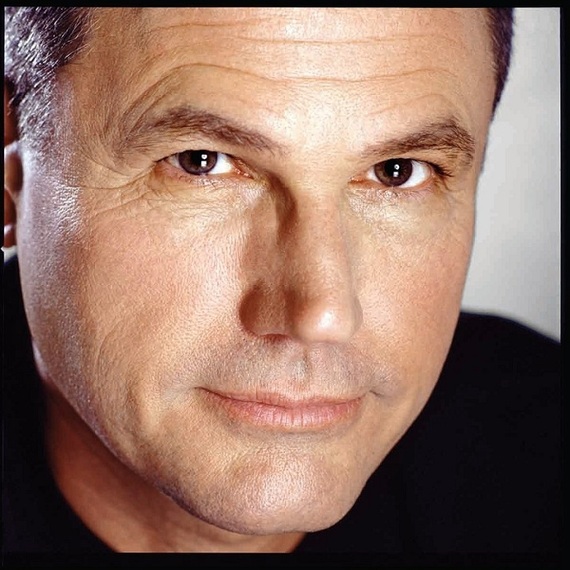 Robert Crais, known to lovers of suspense and crime novels for having written many New York Times bestsellers, including Suspect and Taken, has just completed The Promise, his twentieth novel and the latest in his Elvis Cole and Joe Pike series.

He began his career by writing television scripts for shows such as Quincy, Miami Vice, and LA Law.

In The Promise, Elvis is hired to find a woman who's disappeared. He learns she's an explosives expert who worked for a Defense Department contractor. Meanwhile, LAPD K-9 Officer Scott James and his dog, Maggie, track a fugitive to a house filled with explosives...and, a dead body. As Elvis Cole embarks on a search for the missing woman, he learns the two cases intersect, and could very well bring an end to the lives of Joe Pike, Scott James, Maggie, and his own.

I get the feeling in The Promise that Elvis Cole is still evolving. Will you talk about that?
He is evolving because I am. My first published novel, The Monkey's Raincoat, came out in 1987. I'm not the same person now as I was then. One of the reasons I've stayed interested in Elvis and Joe--maybe the primary reason--is I expect them to evolve over time, as people do. That's why, to me, they've remained fresh. There's always something new and interesting impacting their characters--helping to define who they are as people.

You've created two iconic characters in Elvis Cole and Joe Pike. Will you describe their relationship over the course of the series?
It's dependable. At its core, the series is about friendship and loyalty. It's about having someone you can trust regardless of the situation. Elvis and Joe grew out of my love for the Hollywood notion of the buddy-picture or the bromance. It goes back forever--with Pancho and the Cisco Kid, and much earlier.

There's a reason people respond to this situation: in the darkness, we want a person we can trust at our side. At our core, we're pack animals, like gorillas or wild dogs. We want to gather, have a family. Elvis and Joe are representations of family. They're partners; they're each that friend we all wish we had. I think that unfaltering friendship is worth writing about. I like to see it grow and evolve over time. I like to explore how they came to be as people and as friends. I think that's what I've done over the course of the series.

In The Promise, as in some of your other novels, you've augmented the private detective first person POV with a combination of first and third person narratives, along with multiple points of view. Will you talk about that?
I think it makes for a richer reading experience. To me, employing those writing techniques are the same as a painter using different colors. The backdrop of the novel is my canvas. I want the fullest possible experience for the reader, and a full writing experience for myself. I'm the artist who writes the stuff, but I'm also my own first reader.

I work my way through the characters and their evolution over the course of the year it takes to complete the novel. I want to be entertained and need to stay interested in what I'm doing. The more "colors" I use, the richer the canvas becomes. If I've done the dance correctly, by the time a reader finishes the book, the experience will have been deeper and fuller.

I was amazed by the pinpoint accuracy of your writing from the POV of Maggie, a German shepherd. It reminded me of Jack London's White Fang, only more detailed, but just as dramatic. Tell us about that.
It was very important to me to make Maggie as realistic as possible. I created Maggie and Scott James in Suspect out of respect for the human-canine bond. Anyone who's ever had and loved a dog knows what that's like: the sense of loyalty, devotion, and the relationship the two develop.

When I researched that relationship, I learned amazing things about dog perception, cognition, and why dogs do what they do. I wanted to depict Maggie as accurately as humanly possible--because I had to translate the ways of a dog so any human being would be able to 'get it.'

Once Suspect was published, I began hearing from people who were involved at various levels within the canine community. They were extraordinarily complimentary about how I'd depicted Maggie. It was very gratifying because I chose to do scenes from Maggie's point of view and wanted--as best as any human could--to portray how she would feel; how she'd perceive the world, and what would motivate her to do what she does. That portrayal became one of the joys of the book for me. I really loved being in Maggie's head because she's so pure. And, I enjoyed opening those doors to other people.

You once said, "I gave up this artsy thing when writing novels and went back to what I knew." You described your first two novels as being on the "worst-ever" list, and decided to change your storytelling technique. Will you tell us about that?
You mentioned my TV work. At a fairly young age, I got involved with television. I loved it, and plunged headlong into writing for mainstream television, and did it for ten years. Over that period of time, the stresses of TV production began to tell on me.

I'd always had the desire to write books--things that would be mine as opposed to collaborative pieces, as they are in Hollywood.

I adopted this 'literary' point of view in contrast to the way television writers approach a story. They plan things out; make a pitch to others on the project; then wait until people sign off before they can write it. That's how the business works.

I had this notion that a novelist--an artist--just sits down, goes into a trance, has no idea what's going to come out, and starts to type on the keyboard. And, a few days later, there it is: he's created art. When I attempted to write my first novel, that's how I approached it. After being a TV 'hack' for so long, I was going to be an artist. I started typing, just creating stuff out of whole cloth. I ended up with a five-hundred-fifty page manuscript. It was a disaster. A couple of years later, I tried again; and the same thing happened. It was a big mistake.

After those two strikeouts, I thought maybe art is for other people. The TV thing had turned out okay, so maybe that would be how I'd write the third book.

I wrote The Monkey's Raincoat which really worked out.

So, it's safe to conclude you outline or plot out your novels?
Yes, I do that. What I've learned over the years, after talking with so many writers in all genres, is this: we are all different. There's no one correct way to write. Some people can sit down without a thought in their head and begin to write; and it comes out as a beautiful story. That's how it works for them.

But it doesn't work for me. I have to know where I'm going.

Looking back at twenty novels, I can't complain.

You also once said, "The beginning of a novel is the most difficult part for me." What did you mean by that?
The beginning of the novel is when I'm figuring out what the book will be about. The shorthand way of saying it would be to use the word 'outline.' To this day, that's the hard part for me. I've learned people have different definitions for the word 'outline.' People who like to make it up as they go are terrified by that word.

Often, the implication is that it's some sort of linear act where each chapter is successively outlined. That's not true for me. I take an organic approach, thinking about the characters and the story; and slowly develop different thoughts, scenes, and chapters, the majority of which wind up in the trash. It's a way of growing the story over time. It can take many months. Once I have that storyline--that collection of themes and characters that gets me from the beginning of the piece to the end--I'm off and running. Typically, the actual writing is far less stressful.

What would you be doing if you weren't a writer?
Oh, we're going to play that game. (Laughter). Let's see, if I weren't a writer I'd probably be a cargo pilot in the South Seas, or an architect.

Yeah, an architect. They create and construct.

What's surprised you about the writing life?
If I pretend I don't know what happened, what surprised me is that I would be as disciplined as I am. Writing really takes an enormous amount of self-control and discipline. There are plenty of more fun things to do than to sit at your desk every day and write.

I assume you successfully deal with the near-universal temptation to procrastinate?
Absolutely. The reality is--especially on a bad day, but really, on all days--it's a job like any other. Only, you're your own boss, and the boss, meaning you, is the person who must keep the writing you, in the chair, focused and committed to getting the task accomplished. You have to consistently force yourself to keep writing.

What do you love about the writing life?
What I love about the writing life--despite the bad days when I have to force my way through--is when I'm there 'in the moment,' when what's happening on the page is real and true and good; and I'm there with Elvis Cole or with Joe Pike or with Maggie and Scott, and I'm in complete touch with my emotions. That's when things come together and may burst into something I hadn't necessarily planned.

There's no better feeling. That's what it's all about.

What's the most important lesson you've learned about writing?
The most important thing I've learned about writing is it isn't easy and it shouldn't be. You know what? If I was too productive, if the pages flowed easily and I found myself vomiting out books at an unimaginable rate--as some writers do--I hope I'd be smart enough to throttle back and look for what I'm doing wrong.

After twenty books, I think I've learned who I am as a writer, and how I have to go about writing my books. I don't measure myself against other writers. If I have anything to offer as a writer, it's my world, my point of view, and my sensibility.

You're hosting a dinner party and can invite any five people, living or dead, from any walk of life. Who would they be?
I'd probably invite a couple of painters. There would also be a couple of architects. Painters and architects fascinate me. I think we all do the same thing: it's just that their mediums are different. Their brains work in a different way and I'm fascinated by that. I'd also invite someone like Ray Bradbury or Robert Heinlein, science fiction writers. They would see the world very differently than I do.

Congratulations on your twentieth novel, The Promise, which cross-pollinates Elvis and Joe with characters from another series, namely Scott James and Maggie. This complex and suspenseful novel is heading straight to the bestseller list.