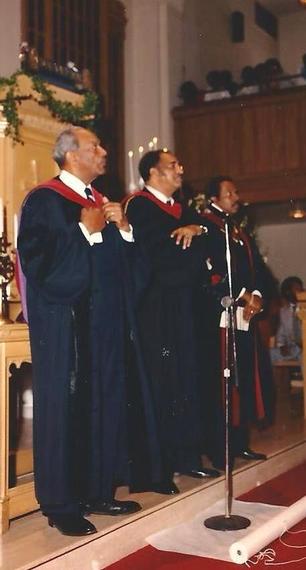 The sun comes up slowly on the banks of Louisiana's bayou's. Lazy mornings mark the arrival of day even as moss covered trees swing sweetly in the hot and steamy breeze. No one took note in the eighteenth year of the twentieth century that a Baptist preacher had come to birth. Such events are not noteworthy. What is noteworthy, however, is that in Baker, Louisiana, in a church college called Leland, Gardner Taylor learned lessons of communication and critical thought. As a result, that engagement of learning produced thousands of sermons that would not only bring generations to conversion but would set high the standard for thoughtful preachers to follow.

What does it take to become a preacher? Is it enough to be absorbed in biblical studies or is it required to preach a word that is so tailored that it meets the expectations of various cultures? In order to be a preacher of whom the world would take note is it necessary to be a craftsman of words, one given to complex theological thought, or should one seek to be a highly marketable agent of the mega-church, able to dazzle audiences in a technological, multi-media society?

You had only to meet him to know that authentic preaching requires none of that. A winsome smile and a halting gait would draw your attention. No matter his age, glasses were unnecessary. His Bible was small and worn. How could anyone read from a print so small? Somehow he lived with the romance of words and ideas. His home was as much seminary as sanctuary. He was as comfortable at Yale delivering the Lyman Beecher Lectures as he was in a local storefront profoundly proclaiming the Word of God he so dearly loved. His whole mind lived at the intersection of instinct and intelligence.

His gift was in simplicity. His gift was to clearly peek within the pages of scriptural writ to see and to sense what the average mind would pass by. His gift was to hide himself behind the cross so that the glory of God could be seen. Typically no manuscript, no scribbled notes -- his sermonic offerings had been written on the tablet of his heart, left open and pure for all the world to see. His was a divine proclamation with a human accent that even the most severe of critics could not escape or deny.

You had to hear him to be swept up by the magnificence of his gifts. I was seated one day in an upper balcony at the Convention Center in Kansas City, Missouri to hear him preach for the Progressive National Baptist Convention. Everyone around me was leaning forward so as not to miss a word. His sermon was modestly titled: "The Divine Boast." It was a simple yet profound analysis of the words of Christ: "I am the way, the truth and the life" (John 14:6).

And my God, how he preached. He preached until it seemed angels bowed low to hear. And then we heard him say, in that God-kissed moment, with the slightest tremble in his voice, he said it was as though he could "feel the mists of Jordan" spraying in his face. Such words, such feeling, such faith. Is it any wonder that a shout shuddered up from that moment that could hardly be contained?

In his last days, Dr. Taylor questioned why God kept him here so long. Dr. Sandy Ray, Dr. Marshall Shepherd, Dr. William Augustus Jones, and so many others had left him behind. The strength of his body gone, his friends departed, no longer able to preach; to what purpose had God delayed his departure?

I suspect that in the mind of God, Gardner Calvin Taylor deserved a Valedictory March; so God let him climb the stairway to heaven alone. He needed no traveling company. After all, "None can walk up there, but the pure in heart." I can only imagine the splendor of that reunion.

"Dr. Taylor, come take your seat. There's someOne over here just waiting to welcome you home. 'Well done thou God and faithful servant...enter thou into the joy of thy Lord (Matthew 25:21).'"