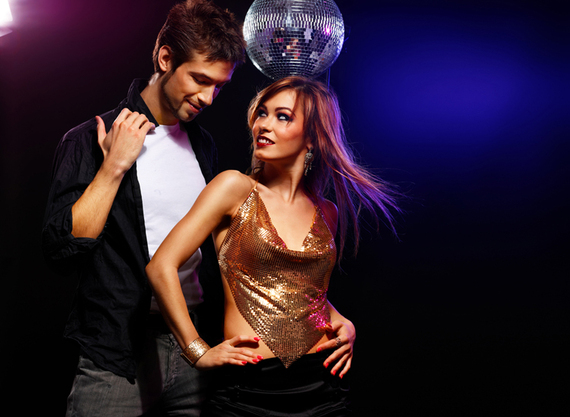 What a difference a gay guy can make.

Surely I wouldn't be the gay man I am today had it not been for the one who made coming out in New York City a little easier for me. He was the bartender who used to splash my Stoli with Canada Dry tonic water in the back bar at Limelight. I was the new kid in town, shy, friendless and still peeking through a crack in the closet door to see how things were on the outside. Every Friday night, I'd leave the Jersey City, New Jersey, brownstone I shared with my three roommates without telling them where I was going. Gay night at Limelight was my dirty little secret.

The first few times I went, nobody spoke to me except for Frederick. He was boyishly handsome and shirtless, with a six-pack and a smirk of a smile that made my knees buckle, and for some reason, he took an immediate liking to me. Night after Friday night, he'd ask about my week, make jokes with me during lulls in the bar rush, and never charge me for my vodka buzz. He asked for nothing in return. He had a boyfriend, and as far as I knew, he was just being nice. He helped make me feel comfortable in gay nightlife and, eventually by extension, being gay in everyday life.

That was then, in the gay Pleistocene era (circa 1991), before "straight-acting" and straight bartenders started taking over gay scenes everywhere. If I were the same timid 22-year-old today, and in the process of coming out in Cape Town, I'd probably be on my own. Not just because urban gay life isn't what it used to be (Grindr has seen to that), but because here, in particular, it seems all of the "gay" bartenders, even the ones who will let us suck tequila shots out of their belly buttons if we're willing to pay for the dishonor, are actually straight. We're little more to them than the source of a potential tip.

I have a theory about straight staff in so-called "gay spaces": It's a marketing ploy by misguided bar and club owners who think a hunky straight man represents the ultimate gay male fantasy, something to aspire to have and to be. Another theory: In this post -- Will & Grace gay age, they're courting female patrons by offering them what their gay clientele won't -- male attention that has nothing to do with how fabulous they are.

But isn't stocking the staff of gay bars with straight boys a bit like always casting straight actors in gay roles, leaving gay actors out of work and gay audiences still not seeing themselves truly represented onscreen? Doesn't it ignore the actual wants, needs and even aspirations of gay men, like the 22-year-old me at Limelight?

What about the increasing desegregation of gay and straight men in nightlife in general? I can still recall the days when the doormen outside of gay bars and clubs -- including the ones posted in front of Limelight's 20th Street side entrance -- used to try to confirm my gayness before allowing me inside. Just because I was never questioned before entering straight places didn't mean I didn't get special treatment in them. I was out drinking one night in 2001 with Stephan Jenkins, the lead singer of Third Eye Blind, at Centro-Fly, a straight techno lounge that had previously been Tramps, the live-music venue one block away from Limelight where I saw Radiohead perform on June 1, 1995. (That People magazine writer who "sashayed out of the dressing room, peeved," post-show was me!) After watching all of the women fawn over the only gay guy in the place, Stephan offered a theory of his own: "I don't believe you're actually gay. I think you only pretend like you are because it's a great way to get women."

I laughed, partly because I was partying like a rock star with the rock star who was dating Charlize Theron, and partly because what he said was so absurd. If I were straight, I'd never stoop to such subterfuge just to get laid. It would be easier to just go to a gay bar and hit on straight girls there.

That's what some straight guys actually do today (shame on them!), and what some would still be too afraid (or homophobic) to consider. I recently came across an article titled "A Straight Man's Trip to a Gay Bar" about the night the writer blacked out in a club surrounded by boys who like boys. As I read about how awkward it was for him to venture so far outside of his comfort zone, I was struck by the irony of it all: The self-consciousness he felt as a minority among gay men is what many of us feel living in a straight world every day of our lives.

While I had to give the writer credit for going there (in print and in Denver), I have mixed feelings about straight men in gay bars. Should gay spaces be for gay people only? In larger than very small doses, straight men can disrupt the aura of acceptance in a gay space. They can be loud, rowdy and prone to fighting when they've had too much to drink, and they don't always react positively to being ogled by gay men, even on our turf.

We go to gay bars and clubs not just to drink, dance and score, but to celebrate our own desires in a safe place, away from homophobic hecklers and hetero sexuality. Aren't we already frequently enough subjected to seeing straight people making out and hooking up in the world outside (and even in music videos by gay artists, like Sam Smith's recently released "I'm Not the Only One")? When we're surrounded by other gay men and presumably accepting women, we don't have to pretend we're anything we aren't, unless "straight-acting" is part of our mating game.

Still, there can be surprise benefits to the scattered presence of straight guys in gay bars. I met one of my exes when he was one of them, there with his girlfriend, who, ironically, put us together. After introducing herself, and then her boyfriend, she departed to the dance floor with their friends, leaving him and me to bond over tequila. Although he insisted on getting my number, after he left, matchmaking girlfriend in tow, the last thing I expected was a text message from him at 8 o'clock the following morning, which made its arrival all the more thrilling.

I was pretty certain that wouldn't happen again the morning after my night hanging out with Ben, probably the only straight guy who wasn't a bartender or a doorman that I ever met at DJ Station, three of the gayest stories in Bangkok. Ben was a tourist from Texas and, as had been the case with my ex, we met through his girlfriend and quickly hit it off. Attentive and attractive as he was, I never once considered scoring. He was clearly interested in me in a purely non-sexual way, human to human, which might have been disappointing had it not been so refreshing. It was the easiest, most stress-free interaction I ever had with a beautiful stranger in DJ Station.

The pressure was off, so we could hang out and do B-52 shots (his treat!) without agendas, ulterior motives or nagging mental questions (Does he want to sleep with me?... Why doesn't he want to sleep with me?). Ben wasn't looking past me to check out who else was passing by or ogling every interchangeable hot body in the room. He didn't insist on walking back and forth from floor to floor to see and be seen, and not once did he attempt to fondle me in an off-limits place.

While his girlfriend danced, I had his undivided attention, and he had mine, although we both knew our connection wouldn't go any further than the exit. It was the kind of one-on-one that I imagine straight women used to flock to gay bars to enjoy, before the proliferation of straight bartenders started raising their hook-up potential: totally clean, above the waistline and in the moment, without any consideration of our sleeping arrangements later. Although straight bars could technically offer gay men the same kind of interactive fun, I'm not so sure that Ben and I would have had the same rapport on his own turf. Straight guys tend to be more straight and narrow when they're in the company of their own kind.

The best thing about that night: When Ben kissed me goodbye (on the cheek, of course), I didn't spend a single second agonizing over whether he'd text me the next day because I hadn't even given him my number. If only more of my nights with gay men had such a perfect happy ending.