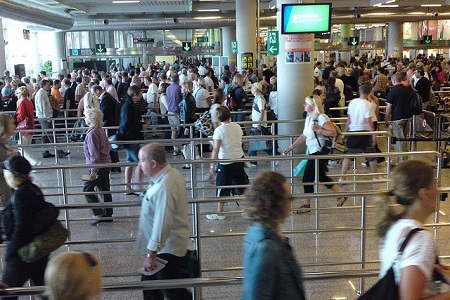 Few things cause more frustration for air travelers than a seemingly endless line at airport security. Fortunately, resigning to an extra long wait (and the cumbersome task of unpacking nearly all of the contents of your carry-on) is slowly becoming a trend of the past. In 2011, the Transportation Security Administration launched the TSA PreCheck program as an intelligence-based approach to expediting airport security. Travelers can become part of the TSA PreCheck program in one of three ways: by pre-enrolling on the TSA.gov site; by invitation through an airline's frequent flier program; or by admission into another Department of Homeland Security Trusted Traveler program like Global Entry, NEXUS or SENTRI.

Over the past several years, TSA PreCheck has funneled more than 55 million travelers through expedited security lines, according to a TSA official. And for frequent fliers, the service has been a welcome change. But the program's implementation is still underway and its ability to accommodate a growing number of travelers has yet to be determined.

Regardless, there's no better traveler than an informed one. To help you navigate the ins and outs of TSA PreCheck, U.S. News sifted through the regulations and gathered insight from a TSA official and Airfarewatchdog President and CEO George Hobica. (Hobica's site maintains a TSA PreCheck airport guide that shows which airports, terminals and airlines offer PreCheck access.) We've uncovered PreCheck's pros and cons, so you can find out if the Trusted Traveler route is right for you.

Become a member of TSA PreCheck and the most important benefit you'll receive is the freedom to use expedited security lines. Land in a PreCheck line and you can leave on your shoes, belt and light outerwear. Plus, you won't have to dig into your carry-on luggage to remove laptops, tablets or quart-sized plastic bags. According to Hobica, these benefits are invaluable to many frequent fliers: "TSA PreCheck just makes life so much more pleasant for air travelers." Though you may be greeted with a long PreCheck line, don't let that deter you. PreCheck lines often move faster than standard lines regardless of length (similar to a grocery store express lane). And speed isn't the only perk: Even if there are more people in the line, PreCheck is more convenient overall since you won't have to unpack your valuables or remove clothing items, Hobica said.

You can keep tabs on your belongings

Consider this: You push your unpacked laptop down the baggage security conveyor belt and soon you're stuck behind a lengthy queue of barefoot travelers awaiting the body scanner. Given your lag, your laptop sits vulnerable to anyone's sticky fingers until you make it through the security equipment. In your attempt to hastily gather the many items you've had to unpack, you leave something valuable behind. Among its suggested best practices for fliers, TSA recommends keeping an eye on your belongings at all times as they move through the security checkpoint's X-ray equipment. PreCheck may help passengers feel safer about the whereabouts of their belongings by speeding up screening time and allowing pricey items to stay inside luggage and out of others' sight, Hobica suggested.

Unlike standard security lines, TSA PreCheck lines do not use the controversial body scanners in which passengers stand with their arms raised as X-ray technology rotates around them. Many travelers are wary of such machines because they emit low levels of radiation (though the Food and Drug Administration maintains that the risk is "extremely small"). But opting out of those scanners means you'll need to have a pat-down, which some travelers may find intrusive or uncomfortable. Also, pat-downs must be given by TSA agents who are of the same gender as the passenger, making for long waits if an agent is unavailable. PreCheck, however, means you won't have to choose between unappealing options, as the expedited lines use the old standard -- metal detectors. Keep in mind, though, that entering the PreCheck line doesn't guarantee you'll avoid a pat-down altogether. Regardless of your Trusted Traveler status, TSA agents have the right to pull you aside and perform a random security check.

When you pre-enroll in TSA PreCheck directly through TSA, you will have to pay a nonrefundable fee of $85. If your application is accepted, the fee covers a period of five years. But if you don't get accepted for any reason -- like for criminal convictions or customs violations, for instance -- you won't get that $85 back. (For specific PreCheck eligibility requirements, visit TSA's website.) Another limitation is that TSA PreCheck services can only be accessed when flying domestically; your money can go further with other programs if you often fly internationally. "I personally recommend that if you travel overseas you actually go for Global Entry, which includes TSA PreCheck, because that gives you so many more benefits like expedited customs and immigration lines," Hobica said. That extra access comes with a slightly higher nonrefundable fee of $100 for the Global Entry application. When choosing where to dedicate your dollars, consider the time required to obtain Global Entry: Admission into the program involves an in-person interview and photographs, among other background screening procedures. United Airlines will waive the $100 Global Entry fee for high-level loyalty members, so it's a good idea to inquire with your airline about possible fee waivers before you pay.

Airline and airport participation is limited

Since 2011, TSA PreCheck has expanded to 118 airports -- but you won't find a TSA PreCheck line at every terminal, and the lines may be closed during the hours you're traveling. Besides restricted hours, you'll also face air carrier limitations. Right now, the airlines participating in PreCheck are: Alaska Airlines, American Airlines, Delta Air Lines, Hawaiian Airlines, JetBlue Airways, Southwest Airlines, United Airlines, US Airways and Virgin America. Where PreCheck does appear, the lines can get lengthy, especially as more travelers become part of the program and the busy summer travel season gets underway. The TSA is, however, working to grow the number of PreCheck lanes and availability at airports across the country.

For fliers, one of the most confusing parts of TSA PreCheck has been that preapproved travelers are not guaranteed access to TSA PreCheck lines. To ensure safety, the program is randomized, which means that sometimes you'll be relegated to the standard security line and sometimes travelers without TSA PreCheck will be pulled into the expedited line. This can be frustrating for those who've paid the $85 fee and spent time completing the PreCheck application process. One way to increase your chances of landing in the expedited line is to make sure your airline knows that you're part of a Trusted Traveler program. "Newbies don't realize that you have to put your Known Traveler ID in the reservation when you make a reservation either on the phone or online," Hobica said. Known Traveler Numbers (also called PASS IDs) are assigned to all fliers accepted into a Trusted Traveler program. Your KTN can be found on the back of your Global Entry, NEXUS or SENTRI membership card or online through your Customs and Border Protection Global Online Enrollment System (GOES) account. Another suggestion from Hobica: By checking in for a flight up to 24 hours in advance, fliers can make sure the TSA PreCheck logo appears on their boarding pass. If it's missing, Trusted Travelers can find time before they arrive at the airport to contact the airline and see if a change can be made.