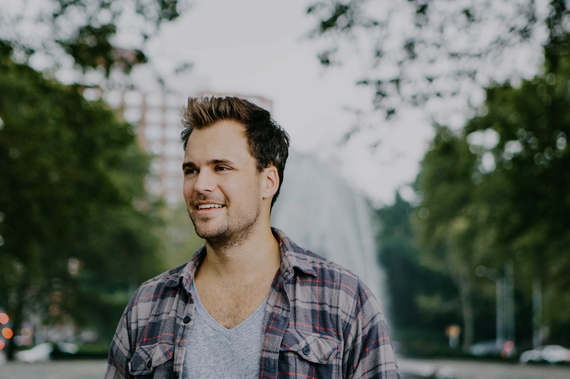 I was recently introduced to The Prospectives, a story, written by Adam Hurly, that follows a gay man making his way in New York City. Hurly is garnering attention not only because he's telling a great story but because of the platform he's using to tell it: Instagram. Every week a new part of this serial unfolds, paired with an illustration by Sam Kalda. I sat down with Hurly to talk about this exciting project:

Phillip Miner: Why did you choose Instagram for telling this story?

Adam Hurly: A couple things came into play at once. First, I wanted to write something that people could read without having to go out of their way. I wanted to find them where they already were looking. Also, telling a story in small pieces seemed like a manageable endeavor. I had heard about an app called Wattpad; essentially it's a bunch of teenage girls writing fan fiction or romantic stories. And there are some 20-year-old writers on there who have millions of readers. Between classes they'd go publish a chapter -- unedited and with typos. Within hours they would have thousands of comments. I looked at what they were doing and thought, "They're pacing their creative projects in a really healthy way." The platform wasn't for me, but I thought I could adapt it to Instagram easily, so long as I had the perfect visuals. I immediately thought of illustrator Sam Kalda, a childhood friend and fellow Brooklyn resident.

PM: How did you come up with the story?

AH: It was fairly easy. It's basically about people I might encounter in my own life and draws from the many experiences that my friends and I have had. This itself isn't a unique idea. My job was to create the characters and nuances and to tell a story that makes accurate observations, all while retaining a plausible plot. The difficult part is in making those observations without trying to arrive at any conclusions. I want readers to sometimes admire and sometimes despise these characters. I need it to feel human and sincere to modern times.

PM: You do a good job of that. The Prospectives really mirrors being gay in New York City right now.

AH: Thanks! I'm happy you think so. I want this piece to be a time capsule. To do that I have to accurately represent how people communicate. There's a lot happening with phones: Characters are communicating -- or miscommunicating -- via texting, they're cruising Grindr and chatting with men who then ignore them in the bar, or they're flirting with some guy in person who is too distracted by his hookup app to give him proper attention.

PM: All of this has happened to me.

AH: Me too! I passed someone on the street, and we looked each other in the eyes, recognized each other from apps, and we nodded at each other, like, "Oh, hello. You're the guy who lives 967 feet away from me." We both smiled in acknowledgment; it felt really neighborly. I think that's the way it should be. I've also passed this guy on my block with whom I went on a date and then texted for a couple weeks after, and even though we both faded out amicably, he totally ignores me as if we've never met. I really don't understand it. I don't lose any sleep over that, but it's such curious behavior.

PM: More than just apps, I noticed many different types of gay relationships are represented in The Prospectives. Was that intentional?

AH: Very much so. I try to use all of these characters to show different aspects of dating and sex. The main character, Eric, has dated two different people at this point. This first guy is his age and demographic, but the relationship isn't taking off because of intimacy issues and the allure of hookup culture. Then Eric dates a much older man he finds attractive because he sees an ideal future version of himself. Conversely, I think the older man, Simon, is attracted to Eric's potential. 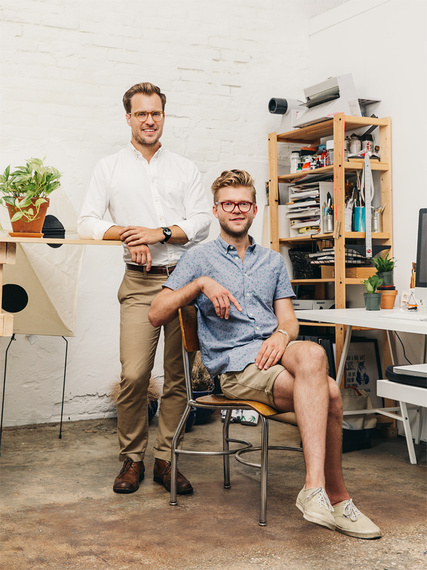 PM: I noticed that identity was an important theme throughout your story.

AH: Yes. First of all, the name "The Prospectives" works on two levels. Most obviously it takes place in Prospect Heights, but more importantly each of the main characters is a "prospective" something. They're all teeming with potential to affect their communities and industries. Because the story takes place in New York, a lot of this transformation occurs around work. In New York, your job is your identity; the first thing people ask is "What do you do?" A lot of people come here to define themselves professionally. These main characters are on that wavelength. They're here to work hard. They're here to make an impact that ultimately benefits their life. They're in their late 20s, finding more responsibilities at work that affect their personal lives. This can only affect the way they see the world and the way they interact with one another. For example, the main character is given a fake name by his boss. This person with a different name becomes this really ugly version of himself, but a version who's successful in his field. I spend a lot of time developing how he tries to hold on to his original identity and take the lessons he's learned and try to branch out in his own direction. At the heart of all of this is exploring how identity is resultant of where these characters came from and where they're going. It's a story about growing up and how we adapt to a push-and-shove environment when we are most dynamic and susceptible. I think about this every day: The longer I live here, the more callous I am. However, I am also more sincere and more confident. I'm originally from South Dakota, and I feel further away from that mild-mannered foundation each day, for better or for worse. I'm just trying very hard to keep it in my rearview as my foot is pushing hard on the pedal.

PHOTO GALLERY
The Prospectives: A Sneak Peak
Download
Calling all HuffPost superfans!
Sign up for membership to become a founding member and help shape HuffPost's next chapter
Join HuffPost 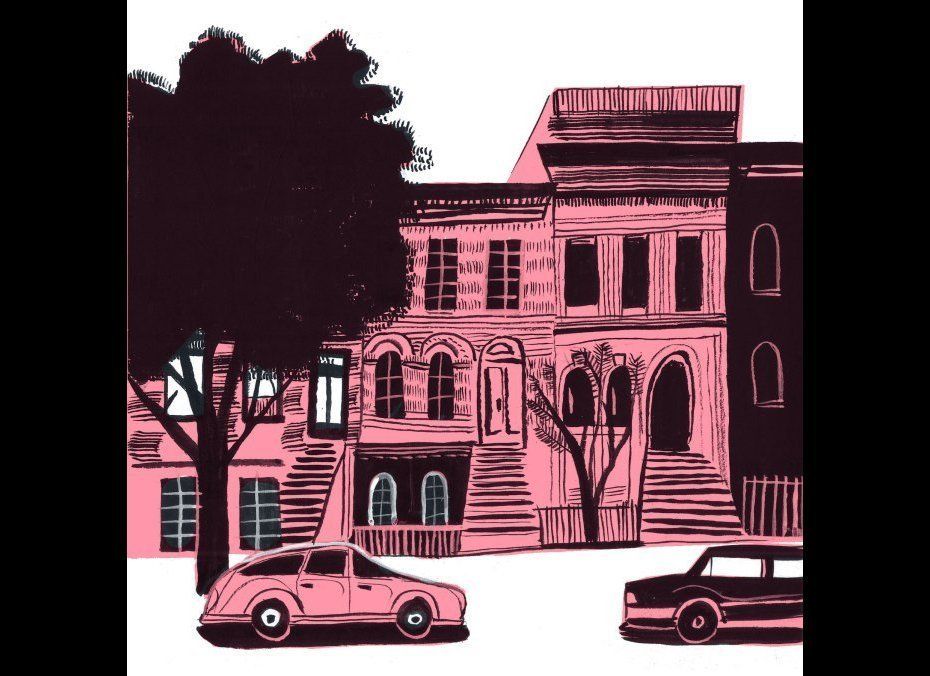 1 / 3
The Prospectives -- Episode 1
Illustration by <a href="http://samkalda.com" target="_hplink">Sam Kalda</a> The Prospectives -- Episode 1 New Yorkers have a way of pitying those people who choose to move away. “Can’t hack it in the big city, eh?” As if the person is giving up, too defeated to live and die for the hustle. I didn’t feel this pity toward Talia when she announced she was quitting her successful casting career and moving home to Kansas City. “I’ve got so much potential I can’t use here,” she said. “I’m over being stifled by the cost, by the rat race. I want a house, and a family, and quiet.” I felt disillusioned. She was once indefatigable. And now, quite logically, Kansas made more sense. Talia waited until our lease was done to uproot herself. Leases, like subway delays, take people hostage here. This left me a clean break to get a new roommate on the lease or to find my own place. I opted for the latter. I had just negotiated a raise at work, and knew that in a year or two, finding an affordable studio in Prospect Heights would be impossible. And without question, I had to stay in Prospect Heights. I owed my sanity to these brownstones, to the park, to the best-of-both-worlds feeling one gets from living in residential Brooklyn. Our landlord owned a few other buildings in the neighborhood, and fortunately had a garden studio available on Underhill just two blocks away. She even cut me a deal on the place since we had good rapport from my four years as her tenant. It still meant I nearly doubled my rent, but I would finally have my own place. “Wow, Eric, I’ll pay a third of that on my mortgage each month in Overland Park,” Talia reminded me. My response: “Don’t be that person who suddenly convinces herself she was never happy here. Just be happy for me.” Talia was surprised and overwhelmed that nearly 50 people attended her farewell party in Park Slope, having been certain that a central Brooklyn location would keep things small and more personable. But that’s just it—Talia was personable, and people were sad to see her go. There were a few big time casting directors and agents—her boss even teared up upon saying goodbye. That was what confused me: her life here was set. She was on one of the biggest platforms in the world and stepped off of it. She made New York look easy, and walking away even easier. We spent Talia’s last full day together. A morning jog in Prospect Park. Then bagels on Vanderbilt. Then we boxed up our lives while sipping seltzer, sent her things on a moving truck and pushed mine into the living room. I would rent a pickup truck the next day to move myself around the corner. The big task of the day was painting the walls white. Each stroke felt like one more memory we were clearing away. Picnics in the park. 4 a.m. taxis. Stories of shameless hookups with cute boys. Talia finally broke down, with half a blue wall to go. I called a car for Talia early the next morning. Our goodbye stretched out for 10 minutes as the driver waited patiently. “You’re the only reason I stayed as long as I did,” she said. “You’re the only reason I came in the first place,” I replied. I hugged goodbye the person who got me my job, who spent four years as my roommate, who introduced me to my first boyfriend, and who helped me through my mother’s death. “Will you miss me?” she asked. Honestly, I just wanted her to be gone already. New Yorkers are assholes. If you aren’t one when you arrive, you become one to survive. Or else you move away, because you’re too sweet and too levelheaded to tolerate all of the assholes. I quickly moved my stuff into the new studio, called up Bart and Peter, and made plans for a night out in East Village. Talia texted me that evening: “At my new home. Can’t believe it’s real. Miss you.” I didn’t text her back til the next morning, because I kind of pitied her. She had all the potential in the world, and she failed to use it. Check out the rest of the story at <a href="http://www.theprospectives.com" target="_hplink">theprospectives.com</a> or <a href="http://instagram.com/theprospectives" target="_hplink">@theprospectives</a> on Instagram.