"The protester" has been named Time's Person of the Year.

Steve Jobs and Rep. Gabrielle Giffords did not make the short list because they appeared elsewhere in the magazine. "It's not a lifetime achievement award," Stengel said of the award.

Time has bestowed the famous distinction on one person (or group of people, or, in the case of such choices as "The Earth" and "You," an idea) every year since 1927. Last year's choice was Facebook CEO Mark Zuckerberg.

The cover of the magazine mentions protesters from all over the world, ranging from the masses who fueled the Arab spring to the anarchists in Greece to the Occupy Wall Street movement. In Time's cover story, journalist Kurt Andersen wrote,

It's remarkable how much the protest vanguards share. Everywhere they are disproportionately young, middle class and educated. Almost all the protests this year began as independent affairs, without much encouragement from or endorsement by existing political parties or opposition bigwigs. All over the world, the protesters of 2011 share a belief that their countries' political systems and economies have grown dysfunctional and corrupt — sham democracies rigged to favor the rich and powerful and prevent significant change. They are fervent small-d democrats.

Below, watch Stengel's announcement on "Today" and tell us what you think of the latest Person of the Year in our poll below. 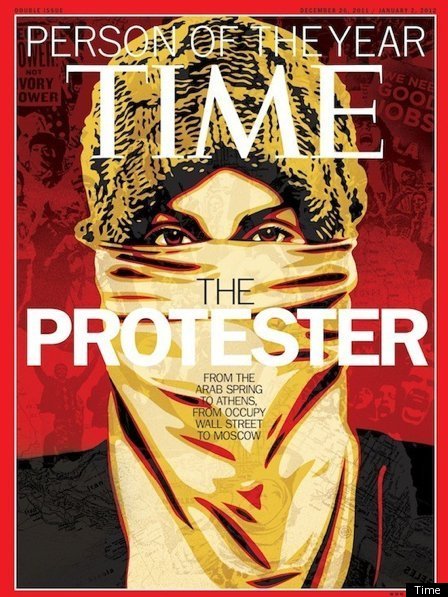 Some of the protesters who inspired Time's choice: