Listen to this companion podcast from SiriusXM POTUS 124.

In contests of most any kind, it's often best to go second. Particularly if you think you're the better player. But if you're the weaker, then surely you should go first.

This week, with single-digit polling numbers, Ted Cruz, the junior U.S. senator from Texas, strode into a friendly den of young Christian lions, the student body of Virginia's Liberty University, and announced his candidacy for president of the United States. His objectives were manifold, but here are the crib notes from his one-hour lecture: 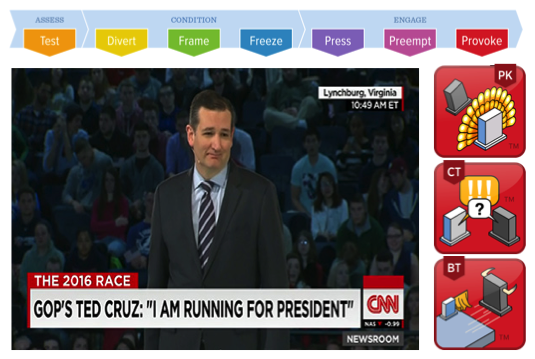 Indeed, Cruz was first and the presumptives, which added another week of coverage to last week's dive-and-catch crisis. He set the tone of unapologetic courageous conservatism. He grabbed his base (or tried) with rhetoric form-fit to tea party types and evangelicals. He shocked those watching (especially pundits) with pronouncements to abolish the IRS, to say nothing of Obamacare. And he acted like Ronald Reagan, from his Morning-In-America fawning (image a government that...) to the dress his wife was wearing (a pink echo of Nancy).

All of this makes one thing clear: Cruz will assume the mantle of provocateur in the plays for a 2016 Republican nominee.

By way of provoking plays and the occasional preemptive Crazy Ivan and Trump, Cruz will wage a front-foot war that insinuates his ideas, agenda and narrative into every corner of campaign commentary. He will be the tick that sucks value-voter favorites Mike Huckabee and Rick Santorum dry and the wasp that swarms his establishment rivals, presumably Jeb Bush, Marco Rubio and Scott Walker.

Most will deflect Cruz's attacks with three possible exceptions: The bully-branded New Jersey governor Chris Christie will be happy to brawl, if only to show that his rhetoric is street-level, not Harvard Square. Former Texas governor Rick Perry will engage Ben Cartwright-style, dismissing Cruz as a confused, off-the ranch Canadian. And, by necessity, Kentucky senator Rand Paul will jump in the ring to retrieve his tea party votes. His exchanges with Cruz will be too wonky for primary primetime, however. They'll cancel each other's vitriol.

One Republican, at least, will watch in admiration. Reaching for his popcorn, Newt Gingrich will be first in line for the primary debates. Newt fancies himself a debater, too, and in this forum he'll watch Cruz to see what he missed.