Up and down steep hills on almost impossibly bumpy dirt roads, we peddled, slowly but surely, on rickety mountain bikes that felt like they might break at any moment. One of them did actually break, but not until after we had reached our destination: The Pub With Cold Beer.

Nestled on a dusty -- or muddy, depending on the season -- hillside on the edge of Phong Nha-Ke Bang National Park in the Quang Binh province of Central Vietnam, the Pub With Cold Beer is a family-run establishment that serves what it advertises, cold beer. It also serves chicken. The beer is refreshing, especially after the strenuous journey out to the pub, which requires crossing a river (luckily only ankle deep at the time of year that we visited), and carrying your bike at times when the road is either too steep, too sandy or too muddy to traverse on two wheels. But the real reason to make the trek out to the pub is the chicken, the only thing on the menu, which you order by the kilo -- or by picking out your own bird.

When we arrived at the pub, we sat down and almost immediately ordered our beer and bird. For one, there's nothing else to choose from, but we had also been warned that it would take up to two hours from the time you ordered to the time your meal was ready, and after a morning of strenuous biking, we were ready to get the process started. After ordering a kilo's worth of chicken, we surveyed our surroundings. Some fellow travelers and a few locals sat at tables and lounged on outdoor hammocks. A couple played pool at the outdoor pool table, while a few dogs and two cats waited patiently under the table of a larger party that was eating its lunch. The pub itself, which consists of an open-air kitchen flanked on one side by an outdoor oven, and on the other by two more open air rooms, is as barebones as they come. With vistas of green rice paddies and mountains, it's also a beautiful oasis. 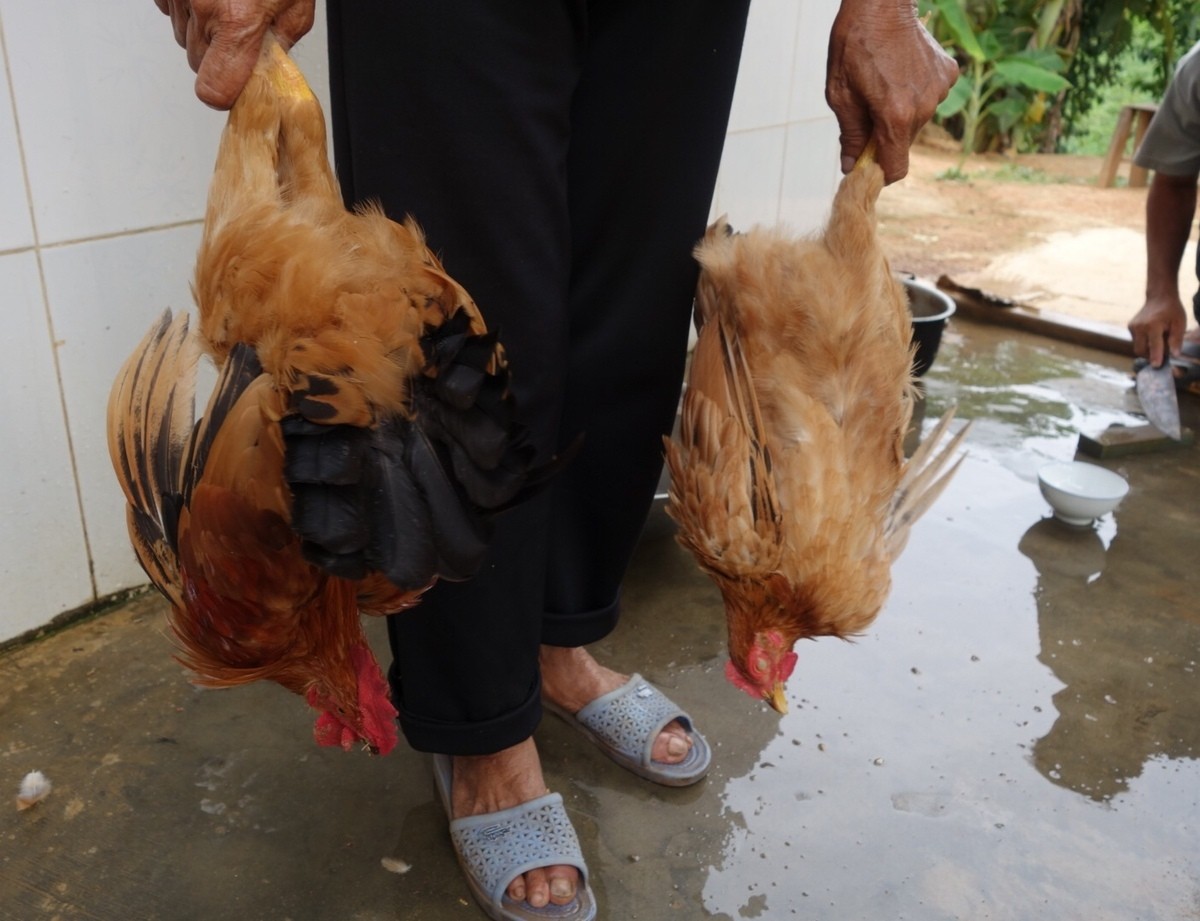 Having been told we could watch lunch being prepared, we ventured out back to find a woman holding up two chickens, and a man holding a third -- lunch for us and the other two hungry parties waiting in front. Chickens in hand, the cooks stood on a cement platform that held nothing but a few stainless steel bowls and a tap with running water. Smiling, they beckoned for us to watch and take photos, and shortly got to work.

I realized at that moment that I had never before seen an animal killed. I've looked at graphic photos of animals at the slaughterhouse and detailed ones of the entire slaughtering process, because I think it's important to know where your food comes from. If you're going to eat it, you should be able to face how it's killed, and understand exactly how it gets to your table. To see an animal killed in person, however, was a first for me. 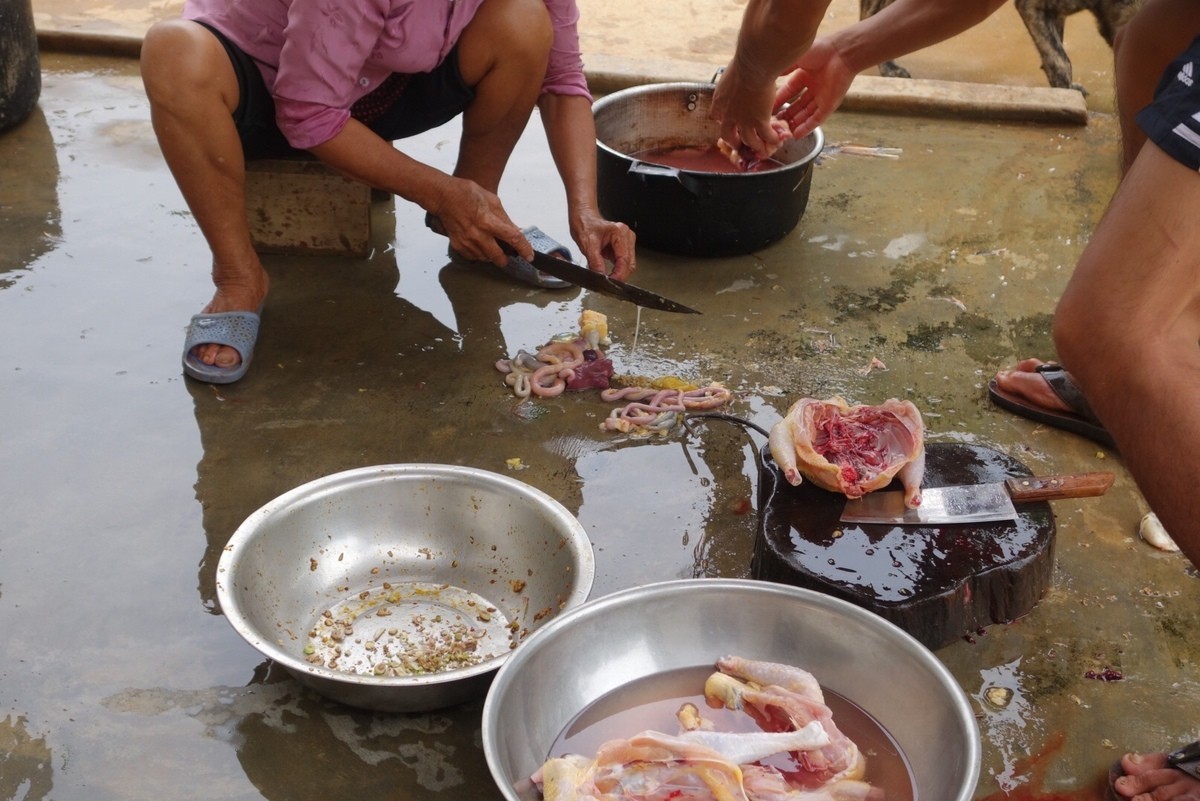 I stood at a distance, and if one of the cooks had asked me to give it a shot, I would have asked someone to hold my hand. The process was humane: a quick slit to the chicken's throat, while the cook held the chicken down firmly and drained its blood into a small bowl. He killed the bird almost instantly -- no chicken running around with its head cut off or something dramatic like that. Watching the thick blood run out of the chicken's neck, however, I felt upset and wondered why I would ever eat chicken, or any animal, in the first place. If it isn't entirely necessary, which in all cases in my own life it isn't, why am I eating animals? How could I eat this chicken that was alive just a few seconds ago? As the cooks began defeathering the bird, washing and readying it in bowls of boiling water, I got out of my head and realized that raising chickens and serving them to customers is this family's way of life. Of course I was going to eat this chicken.

The family at The Pub With Cold Beer not only raises chickens, but also grows its own peanuts, which they serve roasted to customers and also use to make a peanut sauce that comes with the chicken. The menu says they grow almost everything else that they serve, which includes the garlicky sautéed morning glory (a common green in Vietnamese cooking), spicy sauce of scallions & chilis, rice and legendary peanut sauce that all comes with the chicken. The family farm and restaurant are self-contained and sustainable. They treat their chickens well, letting them roam free and killing them humanely. Here was "farm-to-table" -- the overused, sadly almost cliche term -- not employed as a selling point, but in its truest sense.

As we sat eating our lunch, I felt grateful to experience the principles that make the Pub With Cold Beer such an ideal and to see that the buzzwords that overuse has rendered meaningless -- local, humane, family-run, organic, slow -- aren't meaningless at all. It felt really good to be this close to the food we were eating, and predictably, it tasted really good too. The highlight of Vietnam's Quang Binh province may be Phong Nha-Ke Bang National Park's caves -- massive underground worlds so otherworldly you have to see to believe -- but if you find yourself in the area, lunch at the Pub With Cold Beer is equally unforgettable.