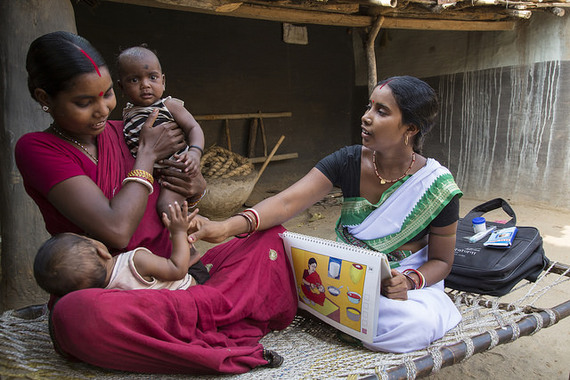 I recently came across the story of an Indian woman named Seema, a mother from a small village in Jharkhand, India. Her story encircles around the strenuous travels she has had to commit to in order to reach some sort of substantial medical facility, which usually only consist of three doctors and three nurses while also being overcrowded with patients; her nearest hospital is a two-hour bus ride away. Such a lack of medical facilities provides dire consequences to those living in rural areas. Infants diseased with infections, toddlers whose colds develop into major breathing problems, dangerous childbirth labor methods that lead to a surplus of maternal deaths, and the list goes on to the thousands, maybe millions.

Seema's demonstration of the lack of medical facilities and accessibility to healthcare across rural India reflects a much deeper-rooted setback based in the Indian government's lack of effectiveness. This also brings about an even more sinister, local consequence against Indian mothers and children who live in such rural areas that are generally neglected by the central government; particularly pregnant women and infants who often fail to obtain the vital, immediate care necessary to ensure survival and prosperity.

According to American India Foundation's (AIF) Maternal and Newborn Survival Initiative (MANSI), almost a quarter of all maternal deaths occur in India. Additionally, around 779,000 infants die during their first month of life in India, also accounting for a great percentage of global infant deaths. These harrowing statistics stem from thousands of situations parallel to Seema's. This is a crisis in India's public health system and is indicative of a lack of prioritization of healthcare, especially for rural mothers and children.

Now, what could be the solution to these grim consequences of a lack of medical facilities in rural India? It is easy to ponder the ideal solutions: introducing policy changes, prioritizing healthcare in rural areas, making public healthcare more accessible and affordable. Nevertheless, it is also obvious that finding solutions to such development issues are extremely difficult and fragile. Dealing with an overbearing government and attempts at communicating with those who are actually affected can make such issues seem intangible. However, the clichéd yet relevant term "knowledge is power" can be applied here to take a significant step toward prevention of maternal and infant deaths in India.

Whilst reading more on the healthcare crisis against Indian mothers and infants, I discovered that AIF will be holding a symposium in October which will bring doctors, researchers, and academic and philanthropic leaders from across the globe to highlight, in a large-scale manner, the maternal and newborn health crisis in India and how this issue can be strategically and empathetically conquered: through knowledge and awareness.

Here lies the beauty of such nonprofit organizations. While the most powerful institution of India (a.k.a the government) has not made any progress in utilizing its own internal resources (such as the network Indian health workers and volunteers who do want to bring change), nonprofits provide the solace by furnishing the knowledge, awareness, and fieldwork necessary to ensure the increase in medical facilities and simultaneously, improvements in public welfare. They give the opportunity for fresh doctors, graduates, and even those directly affected to develop an activist mindset and bring about real time change. Seema herself is a clear example of this beauty. After given the opportunity to participate in the MANSI program, Seema gained significant knowledge and realized that she was not alone in facing a lack of medical facilities in her village; but rather, this was a pervasive issue throughout rural India. Through MANSI, Seema was finally able to set her activist mind to play and changed (and saved) the lives of multiple women and children who are victims of India's public health crisis.

Seema's story is exactly reflective how we can conquer this issue: through awareness, discussion, and transforming the knowledge gained on India's public health crisis to the active power to incite massive change. Just imagine how much a group of individuals with Seema's drive could accomplish; this group would have the ability to change the entire public health system in India, and maybe even of the globe. Knowledge most certainly is power, and thus, global society must continue to support such nonprofit organizations in order to highlight these types of issues that generally ignored by governing bodies and can hence be seized by an educated, motivated, and powerful group of activists such as Seema.