I invited the UPS man into my house recently.

He looked at me funny, likely because he doesn't usually get such offers. But he held in his hands two boxes that I had been waiting on for over a decade.

"This is my book!" I squealed. I jumped up and down. I clapped my hands. I acted like a tween at a Justin Bieber concert.

"Do you want to come in and watch me open them?" I asked. He offered a crooked smile and blushed.

"Probably not," he said. "But congratulations!"

He did walk far enough into the house to set the boxes down, then he hightailed it out of crazy town and left me to my own party.

Two of my four children were there, and for a brief moment I wondered if I should wait to open the boxes until the other two got home. Waiting for my husband was out of the question as he was out of town.

He'd have to do with a text message.

I quickly decided there was to be no waiting. It's not my fault those other two kids have friends and sports activities. The two kids at home are my favorites anyway.

"Open it!" my 12-year-old yelled, and he grabbed the camera, documenting the moment that I've been waiting on for so long. I cried. He hollered. The baby stared at us like we'd flat lost our minds, and maybe we had, but I don't care. 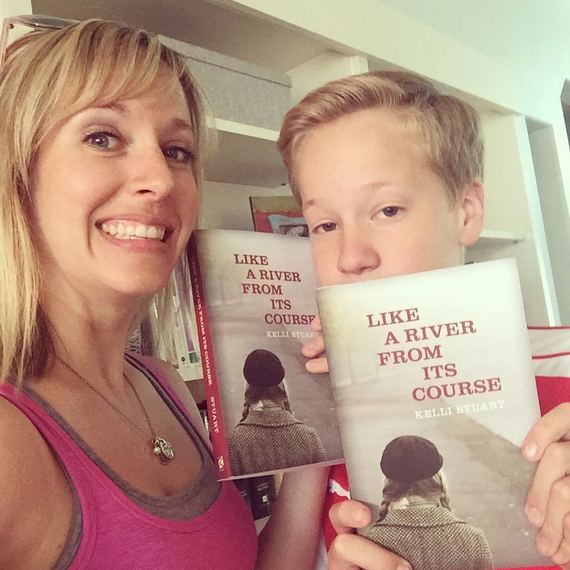 I had a plan to be super cool about the release of this book. I was going to be all hip and elusive with the whole thing. I'd slide it out into the world like a sleek red carpet, and everyone would look at me and be all, "Wow. She is one cool cat."

But then I signed the contract, and this thing started happening, and I threw cool straight out the window.

The thing is, I've been waiting for this. I'm not one of those girls who stumbled upon blogging and found she had a knack for writing, and then a publishing contract showed up in her mailbox and she was all, "I never expected this! What a surprise!"

I was the sixteen year old penning terrible songs in her room at night. I was the girl filling pages and pages in her journals, recording memories like Charlotte Bronte on a windy afternoon in May. This was what I wanted for as long as I could remember.

Couple that with the fact that the seed of this particular story was planted in my heart at 15 years old. This novel was supposed to be written, and I knew I was the one to write it. I just didn't know how hard it would be to sell it.

Over and over, people told me not to get my hopes up. "Fiction is a tough sell," they'd say, shaking their heads sympathetically, as though they pitied my desperation to tell this story.

But those people underestimated my tenacity, and it turns out that's what is needed to sell a novel these days.

I worked on this book through the births of four children. I started and stopped. I scrapped the first draft, then the second, and the third. And then one day, I found the characters. Turns out they'd been waiting for me to live a little before introducing themselves.

I wrote through the termination of our Russian adoption, heartache and grief threatening to swallow me whole. This novel kept me from spiraling into some dark places.

I wrote until I got to the end, then I polished and shined the book up, because publishers want perfection, and I intended to give them just that.

I finally sent it the manuscript out into the editorial world. I pitched it to every agent and editor on the planet. That's only a very slight exaggeration...

And I heard over and over, "The writing is great, but it's not for me. Fiction is just a tough sell."

I considered throwing in the towel. I thought about self-publishing, just sharing the book with family and close friends. I thought about patting myself on the back for a valiant effort, then moving on.

But I couldn't. I just could not turn my back on the story, so I pushed and pushed, until finally...

It's been a long thirteen years waiting for this book to arrive on my doorstep.

So forgive me for acting a bit ridiculous. Forgive me for sharing pictures and videos like I just birthed a baby cuter than one of those Jolie-Pitt kids.

Forgive me for not being cool.

It's just that fiction is such a tough sell.