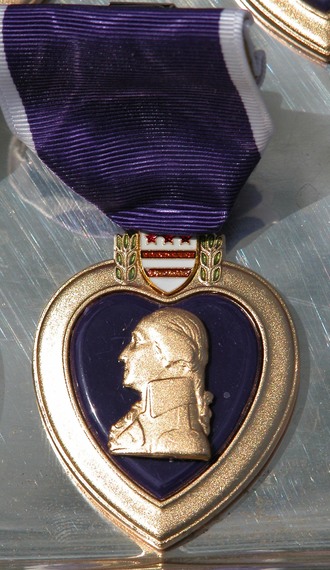 The Purple Heart is the oldest U.S. military decoration.

The medal originated during the Revolutionary War, thanks to the personal efforts of Gen. George Washington who established the Badge of Military Merit to be awarded to Continental Army troops who displayed unusual acts of "gallantry, extraordinary fidelity and essential service" during combat.

During its 224-year existence, it has seen changes in name, purpose and award eligibility criteria reflecting the changing nature of warfare, but also the changing character of the nation that sends its men and women into harm's way.

For example, a 1984 amendment authorized award of the Purple Heart to those killed or wounded as a result of "an international terrorist attack," and "as part of a peacekeeping force" subsequent to March 1973 -- reflecting the changing nature of warfare.

Other changes expanding the eligibility criteria include the award of the Purple Heart to service members wounded while serving in any armed conflict in which the U.S. is engaged, even undeclared, for wounds received as a result of friendly fire and while held as prisoner of war or while being taken captive.

However, the changes neither in the nature of warfare nor in the character of our nation have ever turned this noble military decoration into a trinket that one collects like a trading card.

But something very disturbing occurred on the stage at one of the rallies held by the Republican presidential candidate on Tuesday.

Pulling a Purple Heart medal out of his pocket, like a cheap trinket, Donald Trump claimed the medal was real and that it had just been handed to him by a man. But then Trump, a man who has never seen combat, never even served -- as a matter of fact avoided serving at all costs -- said something unbelievably disgusting, "... man, that's like big stuff. I've always wanted to have a Purple Heart. This was much easier."

No, Mr. Trump, the Purple Heart is not a trading card. One doesn't receive a Purple Heart just because one wants it. One has to earn it. Earn it as Army Captain Humayun S. M. Khan did -- posthumously -- when he was killed in combat in Iraq in 2004 and whose Gold Star parents you smeared again and again.

One has to earn it, like Iraq War veteran Tammy Duckworth -- the first disabled female veteran to take a seat in the U.S. House of Representatives -- did when she lost both legs and partial use of her arm when her helicopter was struck by a rocket-propelled grenade in Iraq in the autumn of 2004. This was the same year Muslim-American Captain Khan gave his life for his adopted country.

As Congresswoman Duckworth, D-Ill, says, sharing a photo of her in a hospital bed recovering from her combat injuries (below), "This is how one usually looks when you are awarded the Purple Heart. Nothing easy about it." 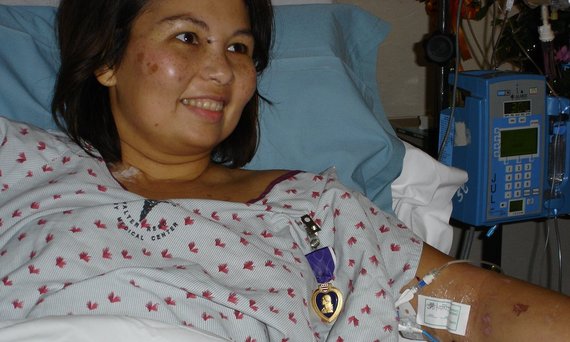 Yes, Mr. Trump, one has to earn the Purple Heart, just as almost two million brave military men and women have done since the Revolutionary War: The hard way.

And, no, Mr. Trump, one does not buy honor on the stage of one of your rallies, as you buy your palaces and golf courses.