The sound of my 5-year-old son's voice shattered my concentration as I sat at the kitchen table, reading the medical journal that had arrived in my mailbox just that morning. I turned around just in time to see him pointing an empty plastic water bottle at my back.

"The bottle is my gun, mommy. It just shot out a bullet."

I paused, unsure how to respond. But it was clear we needed to have a little talk. "Guns sure can be dangerous," I began tentatively. "What do you think you would do if there was a real gun in front of you, like at a friend's house?"

"Well, Mom, I would probably look at it and maybe even touch it... but I definitely wouldn't pull the trigger."

You see, I had never really talked to my son about guns before. I never thought I had a need to. We don't have guns in our house, and he doesn't play with toy guns, watch violent movies or play video games, so I naïvely thought we were safe. I thought he would not be interested in guns or would just KNOW they are dangerous and not to be touched. To be honest, his answer shocked some sense into me.

Would you believe that as a pediatrician, it is against the law in my state to ask my patients if they have a gun in their home? I am allowed to ask teens intimate details of their sex lives: the last time they had sex, how many partners they have had, if they like boys or girls, if they have ever been raped... but not if they have access to a gun. I can ask parents if they have ever had a sexually transmitted infection, if they smoke pot or shoot heroin or snort cocaine... but I cannot ask if they have a weapon that could potentially kill their child if not properly secured. No, I might offend, as if my other questions are not equally intrusive and offensive.

In the United States, approximately 500 children die each year from accidental gunshot wounds, with another 7,500 children hospitalized for non-fatal wounds, according to the American Academy of Pediatrics. That's more than one innocent child every day who is tragically taken from their family. And yet if you walked into my office tomorrow, I could not ask if you have a gun in your home. I could not provide safety tips on how to secure a gun to keep your child safe. I could not teach you how to talk to your child about firearm safety. And if I do ask, I could lose my medical license, face thousands of dollars in fines, or even go to jail. 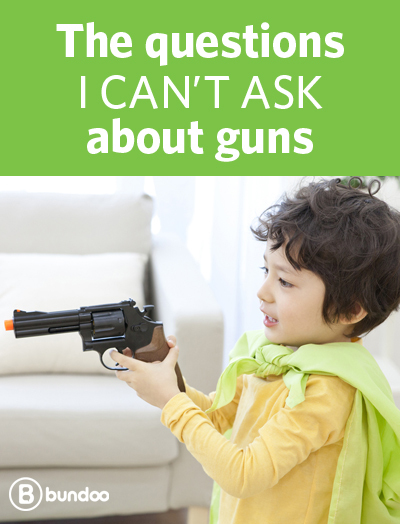 I keep my nose out of politics and do not even pretend to understand the intricacies of the laws regarding gun control. But I am quite passionate about protecting innocent children. And really, this isn't about the laws. So although I can't ask about guns in a clinical setting, outside the four walls of the office I can implore every parent to have the same conversation with their children that I had with mine last night. To talk to their children from an early age about gun safety. To teach children what to do when their friend pulls out a gun from the top shelf of their parent's closet. To coach them how to react when they are pressured to participate in dangerous games that could end tragically. For you see, if I can't ask the families in my own practice, at least I can help you educate your children.

I want to instill in my son a healthy respect for firearms. My son hopefully walked away from our conversation with a very different view of guns. Not because I am an expert on gun control and have all the answers, but simply because I educated him on the potential dangers. And who knows, if you do the same, maybe you will save a life. After all, it really is a matter of life and death.