It's no secret that quick-service restaurant (QSR) chains face a growing threat as consumers become more educated, discriminating, and adventuresome in their quest for healthy eating. From the advent of salads on fast food menus 20 years ago to the smaller portions, elimination of kids' menus, and marquee calorie-counts of today, QSR behemoths like McDonald's and Taco Bell are fighting like hell to stay ahead of consumer trends and revamp their images to attract healthy eaters. But is it working?

Industry-wide, the answer seems to be "maybe." Despite pressures from an exploding fast-casual segment, farm-to-table foodie movements, trendy neighborhood food trucks, and a Jamba Juice in every mall, the big QSRs just keep getting bigger in the U.S. and abroad.

That's only part of the story, however. Industry-dominator McDonald's is starting to show a few chinks in its armor as consumers change their eating habits. In all likelihood, health-conscious dining will only become more prevalent, forcing the mega-QSRs to fight for a more informed and demanding consumer.

Do any of the chains have a head start? Who's winning the PR and marketing battle for the healthy hearts, minds, and appetites of U.S. consumers? I'm glad you asked.

In recent weeks, the data scientists at CivicScience analyzed millions of survey responses in our real-time polling platform from U.S. consumers and their attitudes toward dozens of QSR, fast casual, and full-service dining restaurants, as well as their eating habits, demographics, and lifestyle. CivicScience also asked new questions to spotlight five of the biggest (and dubiously-healthy) QSR chains: McDonald's, Burger King, Taco Bell, KFC, and Wendy's.

The goal in this analysis was twofold: First, to determine how each restaurant has fared in creating the perception that their food and menus are healthy. Second, to determine which restaurants are, in fact, attracting healthy and health-conscious consumers, either because of that perception or in spite of it.

Let's first look at consumers' views on the relative healthiness of the food at each of our five spotlighted brands (for contrast, we added Subway to the mix), based on the following question:

On a scale of 1 to 5, (with 5 being very healthy), how healthy do you consider the overall food and menu at [Restaurant]?

The results below show a Total Positive, Total Negative, and overall ("Factored Healthiness") score for each brand (*): 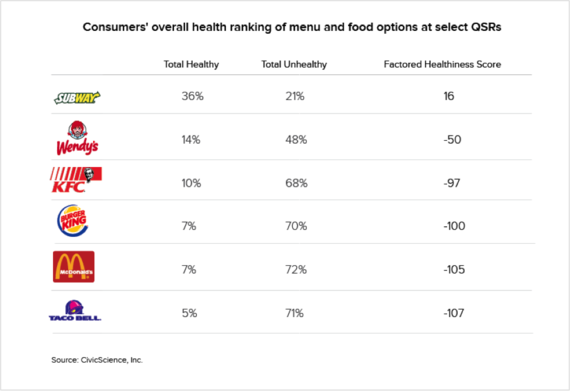 (*Total Healthy and Total Unhealthy numbers calculated by adding the percent of 4s and 5s and 1s and 2s, respectively. Factored Healthiness Score calculated by doubling the percent value of the 5s, adding the 4s, then subtracting the 2s and double-value of the 1s. 3s are neutral. A brand receiving all votes of 5 would total 200, all 4s, 100, all 2s, -100, and all 1s, -200.)

First, note that all of the brands, with the exception of Subway, fall strongly in the "unhealthy" camp. Of the five spotlighted brands, Wendy's performs best on all three metrics, yet still receives almost 3.5 times more negative votes than positive ones.

WHERE ARE HEALTHY PEOPLE EATING?

Now let's look at who actually eats at the five big QSR brands (we excluded Subway from this analysis) and which, if any, are attracting healthy crowds. To evaluate this, CivicScience identified consumers who either love or like each brand and then analyzed the health and wellness attributes of their lifestyle - like how often they exercise, whether they're overweight, whether they smoke or drink in excess, and more. (The full report is available in a CivicScience Insight Report on spanning several brands and insight categories for the chain restaurant industry.) The chart below illustrates which fans of the QSRs are more or less healthy than the general U.S. adult population: 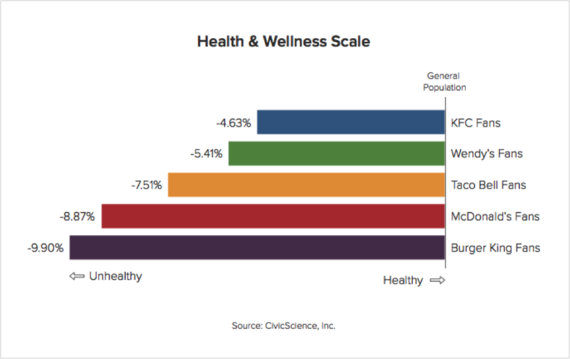 Again, we see that all of the QSRs attract diners who fall below the average population in healthiness. But the individual results paint a slightly different picture. While Wendy's won the perception battle in CivicScience's afore-mentioned data, KFC attracts the least-unhealthy diners. And, while Taco Bell finished dead last based on image, they have the third-healthiest group of fans. Burger King wears the crown for having the unhealthiest eaters among our five brands, almost a full 10 percent below average and nearly twice as unhealthy as the KFC fans.

What do these differences between perception and behavior tell us? For one, while people may value the healthiness of a given restaurant when asked, they may also discard those values when deciding where to eat. It's easy to imagine someone saying, "I know KFC isn't healthy but I just did two hours of hot yoga, so I want to splurge on a KFC Famous Bowl." Now, if I worked in KFC's marketing department, I would spin this to say that, "Our food is so delicious and addictive that even the most health-conscious QSR diners crave it fortnightly" (Yes, that a So I Married an Axe Murderer movie reference).

But, if I'm working at Wendy's, I'm the one boasting. Not only are they handily winning the image battle; they're attracting healthier fans than Burger King or McDonald's, the two restaurants they compete with most directly. Recent trends in sales seem to be confirming Wendy's lead in the healthy-image wars. They're not resting on their laurels either, adding even more salads and healthy options to the menu.

It's hard to look at these consumer insights collected by the CivicScience polling platform and say that any of the iconic QSRs have established themselves as truly healthy places to eat. And, while Wendy's is winning at the moment, there is a lot of money at stake and some very creative and resourceful companies in the arena. A lot can and will change.