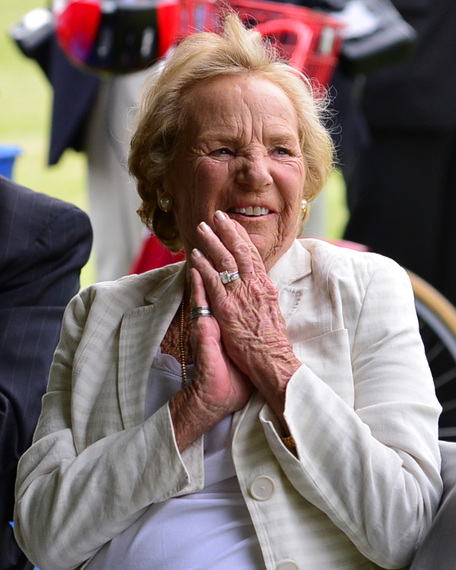 "Kennedy" and "quiet" don't go together in Washington circles. But Ethel Kennedy has spent the last 22 years working quietly with youth from the poorest neighborhoods of Washington, DC to give them a chance to serve their community and save their own lives.

Consider the story of LaShauntya Moore. She recounts, "I was homeless, dropped out of school, and was a teenage mom." She found an opportunity at the Earth Conservation Corps, which offers a living stipend and education award for a year of national service cleaning up the Anacostia River. She discovered a new mission, could support her young family, and found a path back to a better life. She was part of the effort to bring the national symbol, the Bald Eagle, back to the nation's capital when fledglings from Wisconsin were raised and released a decade ago. LaShauntya is now the Youth Director of the Earth Conservation Corps, giving hundreds of other young people the same chance she had.

The challenges are severe, the work is hard, and the stories do not always have happy endings. Diamond Teague, a charismatic corps member who completed his service with the ECC and was heading to college with the scholarship he had earned through his service on the Anacostia, was gunned down on his front stoop at the age of 19. The murder remains a mystery, but Diamond's legacy lives on through the Diamond Teague Memorial Park. It is a stark reminder of the hope and challenge of these young people from the neighborhoods that live in the shadows of Washington.

Ethel Kennedy has stood by these youth for more than two decades and has been a fierce advocate for their futures. In 1992, she waded into Lower Beaver Dam Creek to pull tires from the Anacostia's most polluted tributary and helped launch the restoration effort. She used her power to engage the city, U.S. Navy Seabees, the National Park Service, Pepco and other businesses to secure facilities that became the staging grounds for Earth Conservation Corps operations, some of which are on the banks of the Anacostia River in plain view of the Washington Nationals Stadium. She fought alongside the residents of Kingman Park, River Terrace, and a coalition of community and environmental groups to overturn the Congressionally mandated transfer of two National Park Islands for commercial development. Earth Conservation Corps members led clean-up efforts.

ECC Founder, Bob Nixon, a Hollywood film producer, witnessed the irony of youth trapped in some of the poorest, violent-ridden neighborhoods and living on the banks of one of America's most polluted rivers in the shadows of buildings that house our country's political establishment. In 1989, he organized an effort to enable these forgotten youth to be able to tell a different story about their lives by serving their community and nation.

"When Ethel saw the condition of the river and the young people living there," Nixon said, "it took her one second to say, 'I'm in,' and she has worked for more than two decades to give hundreds of youth a chance to give back and unleash their talents."

Last week, the District of Columbia dedicated the historic Benning Road Bridge as the "Ethel Kennedy Bridge," many years after the legislation was passed quietly by the City Council. It is a fitting and overdue tribute, given that this bridge has been a link from Anacostia to Washington for so many years and Ethel Kennedy has brought her power and prestige to help so many young people.

The quiet work of Ethel Kennedy lives on in the hundreds of young people she has helped find a better life and in the Anacostia River she has helped to restore for the enjoyment of local communities. Imagine what a "service year" could mean for millions of young people across America also ready to give back to their country, and in the process, discover they are not problems to be solved, but potential to be fulfilled.