Twenty years ago this Monday, corresponding to the Jewish festival of Simchat Torah, a young African-American Rhodes scholar walked into a Chabad Jewish student center in Oxford, England. He had had a date with a Jewish woman who told him she was going to be at the Sukkot festivities at Rabbi Shmuley's and would meet him there. As it turned out, he was stood up, and as he waited sheepishly in the corner of the room not knowing what to do next, he was approached by the Rabbi's wife who invited him to sit in 'the hot-seat' next to the young Chabad Rabbi. Being the most joyous night of the Jewish calendar, the young student would later join with hundreds of other students dancing with the Torahs. This accidental meeting would change both their lives.

Cory Booker had little exposure to the Jewish community prior to that evening and I, who was serving as the Rabbi to the students of Oxford University, had only sporadic exposure to the African-American community. But in the days, weeks, and months that followed we began studying together almost daily. We studied the great texts of Judaism and discussed the great speeches of African-American leaders. Cory would later serve a full term as President of our Jewish student organization, which was then the second largest student group at the University with thousands of members. Together we hosted luminaries like Mikhail Gorbachev and other world leaders who lectured on values-based leadership. 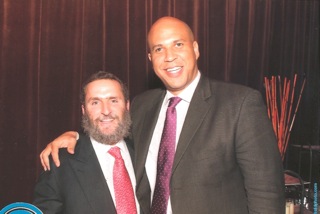 Twenty years, countless conversations, and hundreds of Friday night Shabbat dinners later, Cory today is a much-loved honorary member of the American Jewish community, regularly lecturing at Synagogues and Jewish conferences across the country. More significant, Cory has challenged the Jewish community to live up to its Biblical calling to serve as 'a light unto the nations.' In many of the speeches we deliver together he asks the Jewish participants if they study the weekly Parsha, if they honor the commandments, and cherish the Sabbath. What allows an African-American Christian Mayor to challenge Jewish leaders to deepen their Jewish commitment? Because those same leaders are amazed at Cory's knowledge of Judaism and appreciation of the Jewish contribution to civilization.

I have long believed that the next wave of Jewish commitment will be inspired by non-Jews. In massive conferences like Christians United For Israel we are already seeing a great wave of Christian interest in Judaism and a desire to reconnect Jesus back to his Jewish roots. But Cory has taken this a step further, studying Judaism with a view to teaching it to Jews.

A few years ago AIPAC invited Cory and me to address a large group in Chicago. It was the week where we read the story of Genesis in Synagogue and Cory delivered a moving speech on the creation of Adam and Eve, culled from a speech by the Lubavitcher Rebbe. The wife of a prominent American Jewish leader approached me after the speech and asked if I would study the Parsha of the week with her, as I do with Cory. I asked her why now. She responded, "When you hear someone so prominent in the American political landscape deriving inspiration from the Torah, and he's not even Jewish, you become a little embarrassed that you are ignorant of your tradition and you want to discover what he has discovered." I have heard similar sentiments expressed by other Jewish listeners on many occasions.

My friendship with Cory also sparked a lifelong closeness between me and the African-American community. I became the first-ever white morning radio host on America's legacy black radio station, WWRL in New York City. I took the Rev. Al Sharpton to Israel to alleviate the enmity between him and the Jewish community, I was the driving force behind an effort to have 600 evacuees from Hurricane Katrina find permanent homes in Utah where they have been moved only temporarily, and I preached at the Martin Luther King chapel at Morehouse College at a conference with Coretta Scott King. And as part of my current run for Congress in New Jersey, I travelled to Rwanda to highlight the 1994 genocide and help combat efforts to deny it. The Rwandan government invited me to meet President Paul Kagame in New York last week and I hosted a reception for Foreign Minister Louise Mushikiwabo with American Jewish leaders.

There are those who believe that the black and Jewish communities share a common history of persecution. But being among the world's foremost victims is not the basis of our bond. The relationship between blacks and Jews is built on shared faith rather than shared oppression, common destiny rather than common history, shared values rather than shared interests, and a mutual commitment to social justice rather than a mutual alienation from the mainstream.

I thank God for a friendship that has endured for two decades and the enrichment it has brought to us and our respective communities.

Rabbi Shmuley Boteach is the founder of This World: The Jewish Values Network, which promotes Jewish teachings in the media and culture. The international best-selling author of 29 books, he has just published Kosher Jesus and in November will publish The Fed-Up Man of Faith: Challenging God in the Face of Tragedy and Suffering. He served as Rabbi at the University of Oxford for 11 years where he was named, in 1999, the London Times Preacher of the Year. Follow him on Twitter @Rabbishmuley.