Reactions to Colin Powell's endorsement of President Barack Obama for a second term have speculated that the two men's shared race is the explanation. While the notion that Powell is not being objective in his decision is reckless on the surface, let's simply assume that it is true. If we do, then can't we argue that any white endorser of Mitt Romney might be doing so because of their shared race, as well? More importantly, do individuals, groups, or the media ever make that argument?

This morning, CNN.com was leading with a story titled, "Is Race a Factor in Powell's Decision?" The article was based on an interview with Mitt Romney surrogate, and former New Hampshire Governor, John Sununu. Sununu stated:

"When you take a look at Colin Powell, you have to look at whether that's an endorsement based on issues or he's got a slightly different reason for endorsing President Obama," Sununu said, adding: "I think when you have somebody of your own race that you're proud of being president of the United States, I applaud Colin for standing with him."

During the 2010 mid-term elections I worked with a group of scholars on a project called the Cooperative Congressional Election Study (CCES), where we collected survey responses to a range of political questions. In a module on racial politics, I wanted to see the extent to which individuals tend to make the same association that Sununu made in his CNN interview.

I asked respondents whether ___________ supported Obama in 2008 because he was African American, or because he was the better candidate. For each respondent, the blank was filled in with one or four wordings: 1) People, 2) A Majority of Americans, 3) African Americans, or 4) Whites. In this experimental setting, it is safe to assume the types of respondents are the same for each condition, and thus any differences in response can be attributed to how people think about the group they've been presented with.

The figure below shows the responses for each condition, along with arrows showing the shift in opinion relative to the "people" (the baseline) condition. 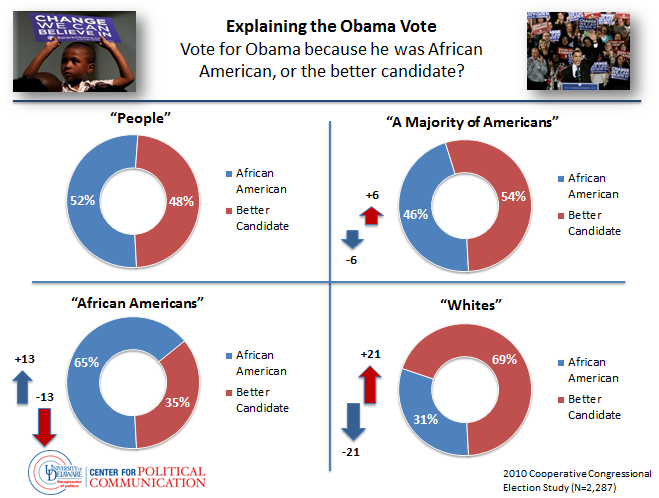 When respondents were asked about why "people" voted for Obama, the result was basically an even split, 52 percent said Obama was chosen because of his race and 48 percent said because he was the better candidate. Those respondents who answered the "a majority of Americans" version of the question produced slightly more agreement, only 46 percent said because of race (down 6 percentage points) but 54 percent said because he was the better candidate (up 6 percentage points). Results from these first two conditions suggests the public does not think about the same population when they think about "people" versus "a majority of Americans" and thus use different information to draw conclusions about support for Obama.

Respondents who were asked why "African Americans" voted for Obama, show a near consensus that this group did so because of Obama's race (65 percent) rather than his being the better candidate (35 percent). But respondents who were asked why "whites" voted for Obama showed the exact opposite near consensus, with fewer saying whites voted for Obama because of his race (31 percent) and far more saying it was because he was the better candidate (69 percent).

These findings suggest that African American support for Obama can be seemingly dismissed because black voters are using racial bias as a decision-making criteria, whereas everyone else is using merit. Yet it is more likely that holding the belief that African American voters are biased allows one to justify their own hidden biases. Perhaps racial bias is actually underlying Sununu's thinking, as well.

The above experiment may have simply revealed opinions about a specific election; so, in a second experiment asked during another portion of the survey, I removed Obama from question -- even if not from the decision making calculus -- and just asked individuals how certain groups, African American people, white people and Women vote: do they vote for their group or do they vote for the better candidate?

Figure 2 shows responses for each condition, along with arrows showing the shift in opinion relative to the "African American" condition. 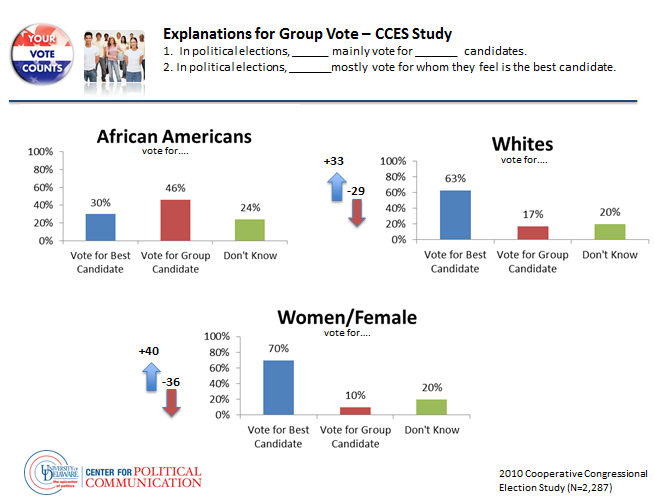 Figure 2. Assessment of How Race and Gender Groups Vote
Source: 2010 Cooperative Congressional Election Study
Exact Question Wording: Which of these statements comes closest to describing your feelings about [_________]'s voting behavior -- even if neither is exactly right? In political elections, ______ mainly vote for _______ candidates, or in political elections, _______ mostly vote for whom they feel is the best candidate?

An undeniable truth from the results is that the public is largely biased in their judgments of African American voting practices. And, if the public is biased, then concluding that it is not, which is the norm among political commentators, is incorrect.

Just to be clear, one does not have to be racist (e.g., dislike black people or other racial groups) to use race in their thinking and, more importantly, racial thinking is not one directional; regardless of one's own racial background they are susceptible to racialized biases and subsequently racialized behaviors or "racial discrimination." The real problem is people denying it or tossing aside any need for self- or public- reflection.

Sununu was suggesting that Powell is racially biased, but not saying the same about himself, or anyone else who is endorsing Romney; and thus the starting point for the bias is revealed.

Of course, later, as Sununu was pressed about his off-the-top-of-mind comments he released a statement saying:

"Colin Powell is a friend and I respect the endorsement decision he made and I do not doubt that it was based on anything but his support of the president's policies."

So, then why did you say it in the first place?

While some who have seen these data before argue that black voters do, in fact, vote along racial lines, this is not necessarily true and, more importantly, it's not as true as the cases for white and female voters. Most research actually does suggest that women do vote along gender lines regardless of party, and that white people tend to vote for white candidates (the numbers in Congress don't lie). However, African American people are more likely to vote Democrat than anything else.

What? You say, "these are only the Republican cases." That's right...

And, if you're still not convinced that political party trumps race for African American voters, then consider a race between two African American candidates, one Democrat and one Republican -- which party is more likely to win? Now, make the same party based comparison for two white candidates and two women candidates, and you're likely to find that you now need more information to make a good guess.

My main academic point is that it's nearly impossible to deny that race matters in politics even when one claims they are making an objective political assessment (see "Obamacare" and "Tea Party" or even reviews of Obama's debate performance). My main social point is that nearly all people hold racial stereotypes and use them in their everyday life, but because these beliefs are socially unacceptable, we'll deny them at all costs. But always remember, denial doesn't mean you're not guilty.