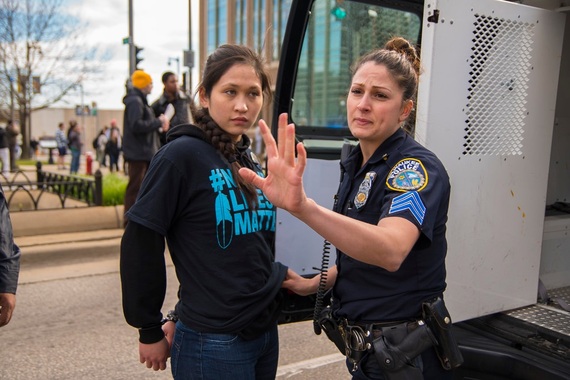 Ma-hi-vist Goodblanket. Corey Kanosh. Allen Locke. Paul Castaway. Sarah Lee Circle Bear. Do any of these names sound familiar? Those are just some of the names of Native Americans who recently lost their lives upon encountering police.

Case in point: On July 12, Denver police fatally shot 35-year-old Paul Castaway, a member of the Rosebud Sioux Tribe, four times. According to law enforcement, Castaway had stabbed his mother in the neck and was "dangerously close" when he was shot. Surveillance footage and eyewitnesses told a different tale, however.

Paul Castaway's mother, Lynn Eagle Feather, said she called 911 asking for help with her mentally ill son. A security camera showed Castaway holding a knife to his own neck when officers opened fire. Witnesses said his final words were "What's wrong with you guys?" Eagle Feather says she now regrets calling the police.

Just a few weeks earlier, Cheyenne River Sioux tribal member Sarah Lee Circle Bear, a 24-year-old mother of two, died in a South Dakota holding cell. Witnesses said Circle Bear pleaded with jailers and told them she was in excruciating abdominal pain. According to media accounts, her calls were met with callous skepticism. She was found unresponsive hours later and pronounced dead on arrival to a nearby hospital.

There are no nationwide rallies for Native American justice, no presidential commentary, no around-the-clock coverage.

These stories bear similarities to the narrative of police brutality and questionable deaths that has dominated the news as of late. Yet, aside from small protests organized and attended by Native Americans, these injustices are largely unheard by the greater public.

Last August, the Center on Juvenile Justice and Criminal Justice reported that despite being less than 2 percent of the U.S. population, Native Americans are the racial group most likely to be killed by law enforcement. This fact is often overlooked in stories referencing violence against people of color--the conversation is largely a black and white binary, and even that binary is often denied and suppressed. "All Lives Matter" comes to mind.

Sadly, for Native Americans, being overlooked is nothing new. Our voices are seldom in the mainstream, our issues disregarded. Native media and alternative media are frequently our only platforms, with the rare article reaching a wider audience.

One of the biggest stories to finally percolate into the public consciousness came through the Washington football team name controversy. And yet even there Native erasure was apparent, as we saw decades of protests and lawsuits against the Washington team turned into a "liberal PC crusade." The few Natives featured in mainstream media were painted as fringe activists, and told there were "more important things to worry about.

A country actively engaged in taking down confederate flags and denouncing symbols of racism remains lukewarm--if not downright celebratory--of the dehumanization and racial caricaturing of Native Americans because well, that's different. Never mind that Native Americans are statistically far more likely to be the victims of a hate crime.

Truth be told, many Americans remain unaware of the indigenous peoples living in their midst. According to the schoolbooks, our communities disappeared with the onset of Manifest Destiny.

Our very existence is an affront to American exceptionalism--best that we remain static noble warriors, not modern peoples living with the effects of attempted eradication, intergenerational trauma, and ongoing disparities across the board.

Thanks largely to a jurisprudence that continues to whittle away at tribal sovereignty and rights reserved to us through treaties, our communities are almost entirely without authority to prosecute non-Native criminals on reservations.

Imagine, if you will, being told an out-of-state offender is exempt from jurisdiction, that all law enforcement can do is escort them to state lines. That's our reality.

The federal government holds prosecution power on reservations, but its declination rate hovers around 35 percent. Native American women are 2.5 times more likely to be the victim of a violent crime and one in three Native women will be raped in her lifetime. Roughly 70 percent of the offenders will be non-Native. Most will walk.

That's just a small sampling of the many unseen ways Native Americans are disparately treated by the American justice system. The deaths of Paul Castaway and Sarah Lee Circle Bear merit investigation, but it appears unlikely to happen without national pressure. Charges have yet to be filed in either incident.

America's original people are tired of our seemingly invisible status. This is an opportunity for Americans everywhere to stand together with the smallest minority population, to demonstrate that "justice for all" is truly a tenet of American society.

This piece was originally published at QZ.com