Many great photographers -- including Paul Strand, Walker Evans, Gordon Parks, Milton Rogovin, Margaret Bourke-White, and Dorothea Lange (the subject of a recent PBS documentary) -- have used the camera as a weapon in the struggle for social reform. Perhaps the most successful documentary photographer in American history was Lewis Hine, who was born 140 years ago this week (September 26, 1874). His photos exposed the scandal of child labor as part of a national reform campaign. He may be less well-known than other muckraking journalists of his generation, such as Upton Sinclair and Lincoln Steffens, but his work was a key part of the Progressive Era reform movement that made America a more humane society. 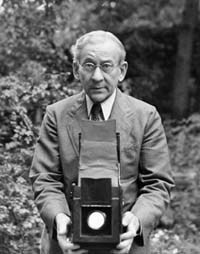 The sky had not yet begun to brighten on a chilly February morning in 1911 when the first workers arrived at the seafood cannery in Biloxi, Mississippi. Slipping in after them was a slender man carrying cumbersome camera equipment. Hine was not allowed in the cannery. But he had no qualms about sneaking in at five in the morning, as he knew the managers would not arrive until hours later. He would return again at noon in a rowboat, tying up to the cannery dock, to get within striking distance of his subjects.

One was Manuel, who, at just five-years-old, was already a veteran shrimp picker. In the photograph taken by Hine, Manuel is round-cheeked and round-tummied, with a serious expression. Barefoot, he stands facing the camera, dressed in a checkered shirt, short pants, and a soiled apron, wearing a fisherman's cap on his head. In each hand he holds a strainer pot. Behind him is an immense mound of oyster shells. 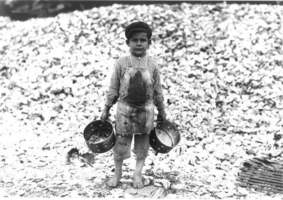 Hine had traveled to Biloxi on behalf of the National Child Labor Committee (NCLC), a group formed in 1904. He journeyed to factories, mills, fields, and mines to document how America's children toiled.

Hine was born in Oshkosh, Wisconsin, above a popular Main Street restaurant that his parents owned. His father died when Lewis was seventeen years old. He worked as a hauler at a furniture factory, toiling thirteen hours a day, six days a week, to help support his mother and sister. But in 1893, during an economic downturn, the factory closed. He picked up odd jobs, splitting firewood and making deliveries. (Delivery boys were later a favorite subject in his work.) When he was hired as a bank janitor, he studied stenography at night and was promoted to secretary.

Hine's life began to change when he met Frank Manny, who became his mentor, introducing him to the ideas of John Dewey and, later, Felix Adler, the founder of the Ethical Culture movement. Hine enrolled at the teachers' college in Oshkosh, where Manny taught, and then spent a year at the University of Chicago. When Manny became superintendent of the Ethical Culture School in New York City, he offered Hine a job teaching geography and natural history. While teaching, Hine completed his degree in education at New York University.

The Ethical Culture School, founded by Adler, was progressive and experimental. It based its curriculum on humanist values that helped lay the groundwork for Hine's future work. Although Hine had never picked up a camera before, Manny suggested he become the school photographer. He took pictures of school activities, set up a dark room, and started a camera club. 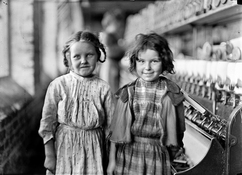 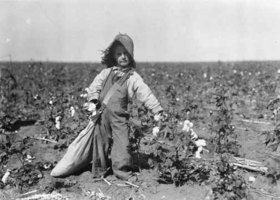 Manny used Hine's emerging photography skills to teach students about social conditions, in particular the conditions facing the waves of immigrants coming through Ellis Island. Manny urged Hine to portray the dignity and worth of the newcomers, in part to help counter a growing anti-immigrant sentiment. Hine, with Manny as his assistant, lugged his rudimentary photography equipment to Ellis Island. He never photographed people without their permission, and in the cacophony of languages, he had to pantomime his requests to take a picture. Using an old box camera, glass-plate negatives, and magnesium flash powder that he had to ignite manually, he managed to capture beautiful images of people just arriving from Europe. He returned to Ellis Island many times over the coming years, taking 200 photographs in all.

After graduating from New York University, Hine began graduate studies in sociology at Columbia University. This prepared him for an assignment with Arthur and Paul Kellogg, who ran the reform-oriented magazine Charities and The Commons (later renamed Survey). They asked Hine to take pictures for the Pittsburgh Survey, a pioneering six-volume sociological study of conditions in that urban industrial city funded by the Russell Sage Foundation. 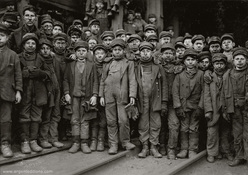 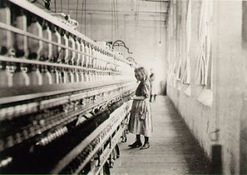 Hine followed in the footsteps of documentary photographer Jacob Riis, who captured the squalid conditions of New York's tenements in his 1890 masterpiece How the Other Half Lives. But whereas Riis photographed his subjects as helpless victims, beaten down by an oppressive system, Hine sought to present his subjects as people with pride and dignity, often tough and defiant, who held out hope for a better world. Hine was known for inviting his subjects to reveal what they wished of themselves rather than trying to catch them or coax them into wearing expressions of anguish or emptiness. Historian Robert Westbrook credits Hine with engaging his subjects with "decorum and tact," rarely taking candid shots but instead encouraging eye contact with the camera lens.

Hine worked with advocacy organizations that were trying to ban child labor. One of his pictures is of a mother and her four children sitting around the kitchen table, in a New York tenement lit by an oil lamp, all making paper flowers. "Angelica is three-years-old," he noted. "She pulls apart the petals, inserts the center, and glues it to the stem, making 540 flowers a day for five cents."

In 1908, the National Child Labor Committee offered Hine full-time work as an investigative photographer. He traveled around the country, photographing doffer boys in cotton mills, cigar makers, coal breakers, cannery workers, berry and tobacco pickers, laundry workers, even glassworkers -- all under the age of 16. To gain access to factories and mills, he would pose as a fire inspector, a Bible salesman, an or industrial photographer. When that failed, he would linger at plant gates, asking children if he could take their picture. His years of teaching, combined with a gentle demeanor, allowed him to connect well with youngsters.

In a speech to the National Conference of Charities and Correction in 1909 entitled "Social Photography: How the Camera May Help in the Social Uplift," Hine argued that "the great social peril is darkness and ignorance." Social reformers, he said, need to expose the terrible living and working conditions that are invisible to many Americans. "The average person believes implicitly that the photograph cannot falsify. Of course, you and I know that this unbounded faith in the integrity of the photograph is often rudely shaken, for, while photographs may not lie, liars may photograph."

Hine was a stickler for individual details, recording whenever possible children's names, ages, working hours, and wages. He was particularly moved by the young boys laboring at coal mines. Of their work, he wrote, "It's like sitting in a coal bin all day long, except that the coal is always moving and clattering and cuts their fingers. Sometimes the boys wear lamps in their caps to help them see through the thick dust. They bend over the chutes until their backs ache, and they get tired and sick because they have to breathe coal dust instead of good, pure air." While he was at a Pennsylvania mine, two boys fell in the chute and were smothered to death.

Hine's photographs made visible the long-ignored plight of working children. They were used in brochures and booklets, news and magazine articles, exhibits and public lectures. His work played an important role in the movement to enact federal and state child labor laws (which were often paired with compulsory education laws to keep children in school), culminating in 1938 with the Fair Labor Standards Act, which included strong protections for children.

Hine continued to document child labor for a decade. In 1918 he left the NCLC and went to work for the American Red Cross, traveling to Europe to document the lives of refugees who were uprooted during World War I.

During the 1920s, wanting to focus on more-uplifting subjects, he began a series of portraits honoring American workers. His final major project was to document the construction of the Empire State Building. Although by then in his mid-fifties, he scrambled to dizzying heights to photograph work that he felt captured the uplifting nature of the human spirit. These photos were published in his 1932 book, Men at Work. 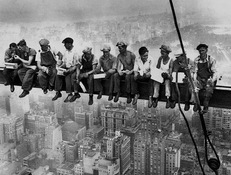 In 1936, Hine was appointed head photographer for the National Research Project of the New Deal's Works Progress Administration. But the next year, when the Farm Security Administration hired photographers to document the working and living conditions of poor and working-class Americans, Hine was not among those hired. The project director, Roy Stryker, said that Hine was difficult to work with. In addition, Hine's approach of allowing his subjects to pose for the camera may not have been in sync with the other photographers' notions of documentary social realism.

Hine's life ended in misfortune. Viewed as outmoded in a time when candid shots were in vogue, he could not find work. He lost his home and ended up on welfare, dying in poverty within a year of his wife's death. Only after his death (on November 3, 1940) was his work once again appreciated. Along with Riis, he is recognized as the father of documentary social photography, an inspiration to many younger photographers. Today thousands of Hine's images have been preserved at major institutions, including the Library of Congress.

Peter Dreier teaches Politics and chairs the Urban & Environmental Policy Department at Occidental College. His most recent book is The 100 Greatest Americans of the 20th Century: A Social Justice Hall of Fame (Nation Books, 2012). Lewis Hine is one of the people profiled in that book.