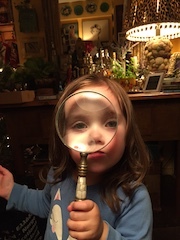 The measure of a civilized society should not just be how well it treats its least fortunate, but also how it treats a future it probably won't live to see. Expect neither form of civilization in the near future. We were promised barbarism and we're going to get it: denial of facts for the sake of profit, resentment-driven, anti-intellectual rage and vandalism directed against what actually made America great. Including science. Particularly science. I don't think anyone has ever seen such a vindictive onslaught on science and the environment as Trump's cabinet choices suggest. Most of the damage a new administration will do by ignoring the warnings of scientific evidence will happen after I am dead, but the child in this photo will suffer the consequences without doubt.

This is why I'm asking you, as a civilized person, to help ScienceDebate.org defend science, facts, reason, the environment - I suppose, quite literally, civilization - in these coming years. Science has driven America's economy for the last 60 years and most of this was propelled in some part by government funding. More abstractly, science is about pride in the beauty of expanding knowledge, from the study of space, to the discovery of the quark - and again, much of this is funded by the government. Most personally, medical science has reduced, or in some cases eliminated diseases like polio and smallpox that previously devastated generations. Have an operation while not conscious? Thank science.

But this is not just about science, it's about the way we think. At a time when rage, resentment, greed, fear, prejudice and other base manifestations of human weakness have risen to the top, please help us defend and promote the dignity and benefits of the search for truth through evidence. People often take science, this huge ongoing endeavor, for granted. Don't. Not now. ScienceDebate.org got all the final presidential candidates in the last three elections to answer its "Most Important Science Questions." This was an unprecedented achievement. Now we intend to do more, a lot more, from organizing debates on local science issues in the midterms, to a lecture series in Washington to help politicians understand the latest developments and true facts about science, to the development of more video content and news on science policy that will hold elected officials accountable for their science and environment policies. No organization will work harder for you and the future. Please help with an end-of-year tax-deductible donation.