Over the past week, the media has trained its myopic eye on those in the progressive community who, having seen that the health care reform plan emerging from the legislative process will fall well short of providing all Americans with affordable health care, are urging that the bill be killed. The dominant attitude of the mainstream media seems to be that this response is irrational. John Harwood, to offer just one example, has likened these advocates to drug addicts. (By contrast, the people who continue to hallucinate up "death panels," are, I guess, simply people who have an interesting and serious point of view on the matter!)

It's important though, to note, that the Howard Deans and Jane Hamshers of the world neither want LITERALLY to destroy President Barack Obama's domestic agenda in a fit of ideological pique, nor do they want to consign millions of uninsured Americans to their deaths. In fact, they desire the opposite: more Americans safely insured, and more electoral success for Democrats -- the kind that comes when Democrats actually keep their promises. You want to talk about people who are, in fact, high on drugs? Let's talk about the Democratic strategists and their journalistic enablers who believe letting down the base is a good thing.

Columbia University Professor Lincoln Mitchell has a post up on these pages on the dynamics of the debate. Let me grab one part of a larger piece that is eminently clarifying:

Progressives who oppose this bill are not being obstructionist, making the perfect the enemy of the good, or sabotaging their president. They are taking the position that history has shown us that opportunities to reform health care do not come along very often, making it essential to get it right when those opportunities arise.

This is precisely what informs those who take the admittedly extreme-sounding position that the current legislation should be scrapped and the effort to reform the health care system restarted. What they recognize here is that what's been driving the reform effort in the first place is a crisis, a crisis of mounting costs to our system and diminishing returns for a populace that's struggling to stay afloat financially and remain in good health.

Pushing the reset button on this process restores the crisis and thus restores the urgency that forced Obama and the Congress to take up the measure in the first place.

Advocating this position is a rational response, if you are up on current events. Anyone who has been paying attention to the news over the past year understands full well that our Congress allowed the financial system to get worse and worse and worse until finally, when the economy was at last at the brink of an apocalypse, they finally acted. Furthermore, if you've been paying attention, you'll know that even in responding to the crisis, not enough was done to ensure that a similar near-apocalypse wouldn't happen again. The overall intent of the so-called "bill-killers" is to not allow a similar sense of false accomplishment occur in the arena of health care.

It's worth pointing out in addition, that the whole "our only opportunity comes with a crisis" idea was something that was floated by Obama's own Chief Of Staff, Rahm Emanuel, who said, "You never want a serious crisis to go to waste." The bill-killers are simply taking this to heart.

And the fact is, if the Senate language survives to be signed into law, America will still be in the throes of a massive health care crisis that will need to be reformed with all immediate haste. This is evident in this portion of a graphic created by Igor Volsky, promoting the virtues of the Senate bill: 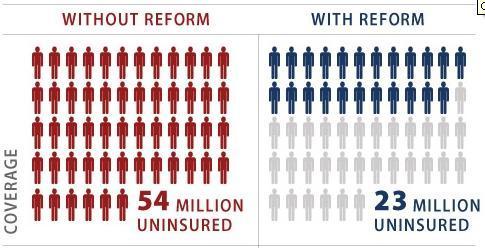 [The word "reform" sort of belongs in scare-quotes, frankly.]

As you can see, by treading right up to the line set by Joe Lieberman, the Senate leaves 23 million Americans without insurance. No one is hallucinating this! And unless Volsky is saying that the 23 million who will remain uninsured represent an acceptable number of needless deaths, I'm sure he'd agree that this means that America will still be in dire need of health care reform on the very next day after "health care reform" is signed into law.

But the problem is, after the health care bill is signed, all of the momentum to reform the system is going to drain away. Legislators will have come through what will be regarded as a grueling fight that they won't be too keen on taking up again. The president is likely to celebrate the event as a momentous historical accomplishment instead of doing the right thing -- offering the correct and sober assessment that his efforts led to a bill that is sorely lacking.

And the media, embodied by simps like John Harwood, will declare the matter settled and get on with the process of writing the stories they are good at writing -- who won and who lost politically in the health care fight. The historical achievement of politicians will outweigh the matter of how that supposed achievement falls on those 23 million uninsured.

If you want to know who is really drug-addled, it's anyone who seriously believes that the John Harwoods, Chris Matthewses, Jon Meachams and Fred Hiatts of the world give a tinned shit about how this legislation actually affects real Americans. If you don't stand to gain or lose political capital, you just don't show up in their reporting.

And so, all the "bill-killers" hope to achieve here is the maintenance of the very real urgent needs of their fellow citizens, before everyone rushes to drown themselves in the waters of Lethe.

PREVIOUSLY, on the HUFFINGTON POST:
Lincoln Mitchell: Improving the Health Care Bill After It Passes Will Not Be Easy