As far as 80s trends go, the resurgent popularity of Ronald Reagan and Tip O'Neill rivals that of skinny jeans and Members Only jackets. But were Reagan and O'Neill really as chummy as some people would have us believe? 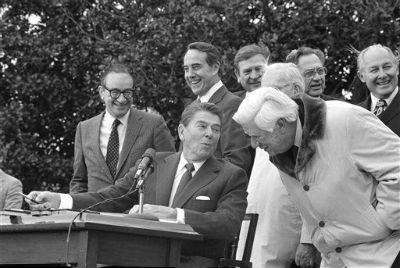 Foreground: President Ronald Reagan (seated) shares a laugh with House Speaker Tip O'Neill at the signing of the Social Security Reform Act of 1983. Alan Greespan and Sen. Bob Dole (R, KS) are among those pictured behind them.

This post is based on an analysis I provided on the November 17 episode of Take Action News with David Shuster in the last 5 minutes of Hour 3. Podcast available here.

It is conventional wisdom in Washington that Republican President Ronald Reagan and Democratic House Speaker Thomas "Tip" O'Neill set a standard of bipartisan compromise in the 1980s that today's politicians should emulate. Specifically, politicians and pundits hold up Reagan and O'Neill's Social Security legislation in 1983 as a model for a "Grand Bargain" on deficit reduction that combines cuts to Social Security and Medicare with revenue increases. According to the popular narrative, despite Reagan and O'Neill's heated political disputes during the day, they were just a couple of Irish-American drinking buddies "after 6 pm." Their friendship enabled them to overcome their ideological and political differences so they could pass Social Security reform in 1983, including tax increases and benefit cuts, which gave the program the $2.7 trillion surplus it enjoys today. Just as Reagan and O'Neill agreed, respectively, to revenue increases and benefit cuts they didn't like, the theory goes, so too must Obama and Boehner.

The Obama Administration has claimed the "Reagan and O'Neill" mantle as a way of endorsing the Grand Bargain while avoiding specific policy recommendations and the scrutiny they would invite. In President Obama's first presidential debate with Mitt Romney, he said, Social Security is "going to have to be tweaked the way it was by Ronald Reagan and Speaker -- Democratic Speaker Tip O'Neill." By invoking Reagan and O'Neill, Obama signaled his support for an approach that includes both cuts and revenue increases, without having to provide details.

Unfortunately, the media have not examined the accuracy of the Reagan and O'Neill metaphor, letting politicians' claims to their legacy go unquestioned.

In fact, journalists who support a Grand Bargain have actively reinforced oversimplifications of Reagan and O'Neill's bipartisan ethos. In Jill Abramson's New York Times review of Jon Meacham's new biography, Thomas Jefferson: The Art of Power, Abramson argues that the entire a book is one big, historical argument for Obama to make the Grand Bargain. Thus the review is called "Grand Bargainer." Abramson muses that in Meacham's descriptions of Jefferson's reconciliation with Hamilton, "One hears the ice cubes clinking in President Reagan's highball as he and House Speaker Tip O'Neill shared drinks and jokes in the White House and hammered together a deal on Social Security." While Abramson questions whether Jefferson was as conciliatory as Meacham portrays him, she has no problem uncritically parroting popular conceptions of Reagan and O'Neill as paragons of bipartisan compromise.

In reality, the popular depiction of Reagan and O'Neill as bold figures that transcended partisanship for the greater good is false. Ronald Reagan and Tip O'Neill's working relationship was contentious and adversarial. Reagan succeeded in negotiating the Social Security legislation of 1983 only because he agreed to O'Neill's terms, and because Social Security faced an imminent financial crisis.

Reagan and O'Neill may have had drinks together on occasion, but they also denounced each other in terms that would make Obama and Boehner blush. O'Neill called Reagan "Herbert Hoover with a smile" and "a cheerleader for selfishness." Reagan dubbed O'Neill "a round thing that gobbles up money."

O'Neill was only willing to compromise on Social Security when he knew he had the upper hand. Reagan made the mistake of sneaking $2.5 billion in Social Security cuts into a budget bill that would go toward reducing the budget deficit not Social Security. O'Neill responded immediately with a press conference, characterizing Reagan as an enemy of "decency." "For the first time since 1935 people would suffer because they trusted in the Social Security system. I'm not talking about politics," O'Neill said. "I'm talking about decency." O'Neill also proclaimed his adamant opposition to benefit cuts, never revealing willingness to compromise.

Reagan was humiliated and invited O'Neill to help design the 1982 National Commission on Social Security Reform, better known as the Greenspan Commission. The Commission was subject to major influence by Democrats and organized labor. As a result, the Commission's recommendations were more or less acceptable to Democrats, becoming the basis of what Congress passed into law.

Unlike the changes Obama is under pressure to adopt, the 1983 Social Security reforms were not part of a "Grand Bargain." They were exclusively for Social Security.

What is more, the circumstances that drove O'Neill to compromise were different than those facing Obama. Social Security reform is just less urgent than it was when O'Neill agreed to benefit cuts in 1983. In 1983, Social Security was facing an immediate financial crisis, so there was a greater incentive for O'Neill to compromise. For Democrats who don't want to cut Social Security, there is little reason not to wait. Today, the modest shortfall is still years away. By 2033, when the shortfall is projected to occur, we will be an older country that is probably more willing to pay higher taxes for social insurance benefits.

Cuts today would have a much greater proportional impact on Americans' retirement security. The cuts passed then coupled with the massive rise in Medicare Part B premiums are already on pace to reduce Social Security's replacement rate for the average earner retiring at age 65 from 40% in 2005 to 32% in 2030. Meanwhile, other sources of retirement income have become less reliable. From 2007 to 2010, median net worth for Americans near retirement--ages 55 to 64--declined to $177,000, a one-third drop. That's why Bob Ball, Tip O'Neill's closest aide in the Social Security negotiations of 1983, wrote in an op-ed in the Washington Post in 2007 shortly before his death, that closing Social Security's funding gap with revenue increases alone would be "the height of responsibility."

So instead of repeating platitudes, the media should be asking tough questions:
Personally, I'm hoping the President finds his inner O'Neill. Tip might tell him: You shouldn't cut Social Security for the sake of a false bipartisan ideal.

Views expressed are the author's own.