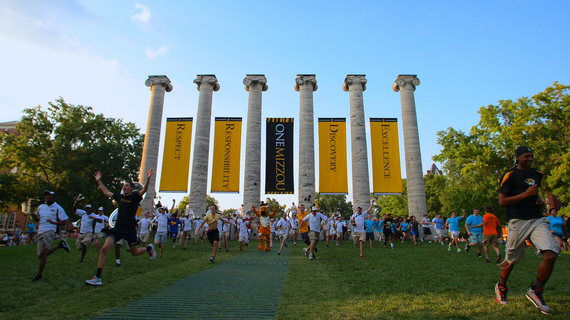 There is a poetic hypocrisy about the brand of racism I faced in high school: linguistic critics who praised my "good English for an Asian" were the same people lacking the cultural awareness to understand that I can't teach them how to speak "Asian" because "Asian" is not a language.

I've been called "white-washed" when I didn't speak with a Jackie Chan accent and was called "too Asian" when I brought rice dishes to school. I've been called "Ching" and "Chong" and everything in between.

While these situations have, and continue to, tug at my patience, nothing is more patronizing than when people legitimately challenge me to twist my perception of their racism into "being able to take a joke." It's incredibly problematic when it is believed that stereotypes like being good at math or being law-abiding citizens should be accepted because they are "compliments."

Which is why I have such a difficult time digesting the following line in Conor Friedersdorf's explosive piece in The Atlantic about the uproar over a Yale email hoping to hedge the risk of students wearing offensive Halloween costumes.

"This notion that one's existence can be invalidated by a fellow 18-year-old donning an offensive costume is perhaps the most disempowering notion aired at Yale."

The quote above references an open letter from Yale students, arguing that offensive costumes force engagement with "brutal pasts" that mock their race. While it's fair to say responses like skipping class and losing sleep - as quoted in Friedersdorf's piece - seem an extreme and hyperbolic reflex to what is simply a costume, to say it is a "disempowering notion" to be so passionately affronted discounts the rights of people to harbor whatever emotion they chose (so long as it doesn't result in violent or destructive actions). And we - black, white, green, purple- have no place to dispute those emotions.

The same conversation has transpired at the University of Missouri, where tensions led to the resignation of both a president and a chancellor. But the debate on the merits of whether or not people should be offended has clouded the most important observation in the recent protests: that college campuses are the epicenter of this awakening.

College Campuses and the "Subtle Racist"

Yale University's motto is "Lux et Vertitas," which is Latin for "light and truth." It's actually a perfect mantra: modest, clear and direct. For most of us, college is not just a venue for learning Keynesian economics or hyper-analyzing the rhetoric of Thomas Paine's letters. There's immense social discovery that comes with navigating the first stages of life as an independent person.

For this reason it makes perfect sense that a national conversation on race would rumble beneath the campuses across the country. The simultaneous outburst of tension at Mizzou and Yale is even more remarkable when considering that one is a public school in a state where the Ferguson riots took place while the other is a prestigious private school in liberal New England. Together, they represent all corners of the country and paint an ugly portrait of our nation where it's apparent that racism exists. Everywhere.

But the racism on our college campuses is not the racism of the civil rights era, where systematic racism had to be battled in court. The generation that perpetuated, later tolerated, and then eventually denounced the lawful segregation and discrimination of minorities are now parents to our nation's college students. But despite the subtle racism taught by parents, college students are enrolling in liberal schools where, for the most part, progressive society has made it clear that racism is simply a bad thing.

These are the subtle racists that are ignored in The New Yorker's Jelani Cobb's response to Friedersdorf's piece in which he argues that "free speech fundamentalists" are detracting from the advocacy efforts of the likes of the University of Missouri protesters:

"Right-to-offend advocates are, willingly or not, trafficking in the same sort of argument for the right to maintain subordination."

Fundamentally speaking I have an issue with Cobb's dangerous assumption that, while eloquent, exacerbates the intentions of people who by definition would be considered racists. While there are certainly people so adrenalized by their hatred of black people that they would shoot up a church, I would argue the vast majority of racists are the ones who don't know they're racists. The people who, while they have no intention of bringing back Jim Crow laws, exhibit subtle racism when they don't think the black woman on the bus graduated college. Or the people who, while realizing the injustices of segregation, assume an evening that begins with a walk through a predominantly black neighborhood will end, certainly, with multiple stab wounds and a missing wallet.

These are the subtle racists that constitute the pervasive and frustratingly passive universe of racism, and these are the subtle racists that need to be the ones to have a conversation on race. If we want America's future to be more welcoming and opportunistic for all races then the future leaders currently sitting in lecture halls and classrooms need to address the underlying racist tendencies that most of us deny having.

Friedersdorf later wrote his own response to Cobb, in which he vehemently argues against Cobb's assertion that free speech is mutually exclusive to rights activism. And to a point I agree. Free speech is the one vehicle that is allowing our nation to transparently understand how prevalent racism really is. In a way it embodies the first portion of Yale's motto when free speech allows us to "light" the racial situation in our country and see the true depth of our prejudices.

But free speech isn't free on college campuses, a principle that Friedersdorf briefly touches on. Schools are the exception to the amendment right that Americans have come to live, swear, and die by. Without diving too deeply into the intricacies of U.S. law, private schools can prioritize a peaceful environment for education above free speech. School administrations thus take the ethical reigns behind allowing or banning certain activity, a responsibility that subjects one to the challenging public scrutiny of what constitutes the moral authority to create certain rules. In public schools, this provision doesn't exist; full speech rights must be enforced.

As such, the protests at Yale are more germane to the calls for action by Yale administrators to, for example, institute "safe spaces." But protests calling for equivalent action at the University of Missouri are summoning a far greater challenge, one that challenges the rights of administrators at even public schools to compromise some free speech for a peaceful academic environment.

And while I step away from a legalistic viewpoint of this, I argue that even a legal review of the issue of free speech in schools is subject to moral judgement, which brings about the central question that I think needs to be asked in a conversation on race.

Where is our ethical responsibility?

There are merits to both arguments. Imposing rules would, by definition, create more order and allow education to override the fears and inequities caused by racism, leveling the opportunities for people of all races and backgrounds to all resources. Allowing all speech would create productive conversations where people could share and understand perspectives on race from each other, dulling out false misconceptions of others.

There are also huge pitfalls to both arguments. Imposing rules would only suppress racism, somewhat fueling repressions that wouldn't solve anything. Allowing all speech would only increase confrontation, inevitably leading to conflict.

Where you stand on these issues - and there are other viewpoints not listed here for the sake of brevity - depends largely on your faith in whether or not civil discourse is possible. The general trend is that if you believe that our nation can have a productive conversation, you might defer to allowing free speech. If you believe our nation is so clouded by racism that structural encouragement is needed to create racial equality, you might defer to a more activist stance.

And perhaps that's a question we need to ask ourselves. And each other.

Brian Cheung is a freelance writer interested in socioeconomics, finance, and media analysis. He graduated from Syracuse University majoring in finance and broadcast and digital journalism. Brian's work can be seen at brian-cheung.com.