Ernest Hemingway wrote, "Never confuse movement with action." So while I applaud the 300,000 people who passionately hit the streets of Manhattan during climate week and am encouraged by the long list of commitments made by global thought leaders and organizations, I'll remain cautious. Why? Because ever since global negotiations collapsed in The Hague in 2000 (really-that long ago), there have been countless convenings and commitments made with minimal progress, yet we keep going down the same path despite getting the same results. I think it was Einstein who defined that as insanity.

In my personal hunt for sanity, I'm going to offer up a few new ideas about how we might approach things a bit differently this time around. And it starts with a hefty dose of humility. 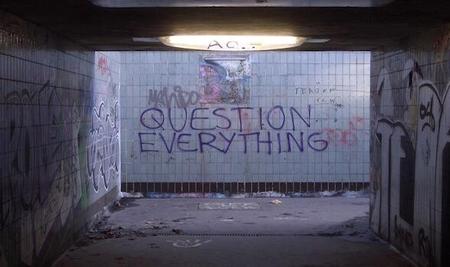 The problem we face is a "wicked" one and the truth is we know a lot less about how to tackle it than most experts and thought leaders are willing to admit. Braden Allenby and Daniel Sarewitz, authors of The Techno Human Condition, describe a wicked problem as "at Level III, operating at Earth systems scale, where all bets are off. " What they mean by that is, ditch certainty and humble up because we're no longer operating in a system that anyone can possibly fully grasp. Which is why this self proclaimed non-expert is endlessly suspect of anyone serving up 'one size fits all' solutions, particularly when those solutions haven't even come close to getting the job done for decades.

Cutting to the chase: if renewables and energy efficiency continue to be the only tools we have in our climate-fighting toolkit, I feel pretty confident saying we're in serious trouble. But that's not just me talking. I'm in frighteningly good company. Nearly every major report over the past year (IPCC's Mitigation of Climate Change, UN's Pathways to Deep Carbonization, The New Climate Economy report) has said we need to move beyond the current pathways and expand our zero-carbon energy options (ie, nuclear and carbon capture and sequestration (CCS)). And I only first landed on this 'aha' after quietly convening about 20 key climate folks - spanning science, policy, entrepreneurship and finance - over the course of 6 months, all of whom agreed that staying the course won't be enough (it should be noted that a number of those folks are far up the food chain of the very environmental organizations saying it will be).

But let me be clear, I don't know anything for sure. Nobody does. And that's just the point. There are no absolutes in a climate conversation. Only increasingly mounting evidence to suggest that the predominantly accepted pathways won't cut it. Oh, and hey, we're just about out of time! So, in other parts of our lives where there's this kind of extreme level of uncertainty and risk - say, with our health or driving our cars - what do we do? We get insurance. We have a backup plan. We have a Plan B.

Step 2: Create and Catalyze a Plan B

What does a Plan B look like? Is it anti-renewables and energy efficiency? Heck no. A Plan B supplements everything already happening. President Obama frames it as an "all of the above" strategy because, as Chris Smith of the Energy Department rightly points out, "You can't think about the sustainable clean energy economy of the future without thinking about how you manage emitting sources of today." Bingo. Allenby and Sarewitz call it identifying critical 'option spaces':

"The unpredictability and complexity of the challenges we face are best met through a capability to adjust in real time, which in turn means we have options available when our planned paths go off in wildly suboptimal directions. Identifying multiple paths forward, and identifying options before they are needed, will dramatically improve our ability to adapt."

I personally focus all of my time and effort on a Plan B scenario because so few other people are. Why is that? Because working on this piece of the pie is extremely difficult. Made much more difficult by the fact that the philanthropic sector focuses 95% of its attention on the soft path options, and very little outside of it.

Look, I get why the renewables and energy efficiency story has enormous popular appeal. It fosters the comfortable notion that this wicked problem can be solved without cost or inconvenience. Without hellish trade-offs. All upside, no downside. What's not to love?! The problem is, as with most things that sound too good to be true, it's too good to be true. And there are serious consequences around how we're equipping ourselves to turn this global energy supertanker around.

It gives me real hope to see a growing number of respected leaders speaking out publicly about the need to expand our technology portfolio including Bill Gates, Jeff Sachs, Carol Browner, Christie Todd Whitman and, my personal favorite, the Dalai Lama (I knew I loved the Buddhists, but now they really have my attention). Still, we need a lot more voices out there and a lot more people committed to moving things collectively forward with rigor, oompf and well, cash. Because it's not gonna' be easy and it definitely won't be cheap.

Step 3: Stay the Plan B Course Despite Silver Bullets & Upbeat Stories of Progress (without facts to back them up)

It's easy to get distracted from a Plan B when there's claims of silver bullets or inflated stories of progress that facts can't support. And boy does that happen a lot. Don't fall into the trap. Look, we all want something magical to save the day, but in case it doesn't? We really need that Plan B in motion to divert disaster.

If you think a carbon tax is the answer, take a moment to really understand its real world complexities. Ask yourself, what's the number that will truly shift the world away from fossil fuels, is it viable to achieve, and what evidence do I have to support the answers to those questions? In other words, know your target tax goal and work like hell to achieve it, but don't get sucked into a victory dance when you hear that a carbon tax has been passed because the level at which it passes and/or gets to is essential to understand as it relates to actually solving the problem.

Jesse Jenkins, an energy analyst and writer, has done the heavy lifting on this one, so I suggest taking the time to read his piece. If you don't, here's the headline: a carbon tax needs to be between $15-150 per ton of CO2 to meaningfully impact climate change and the odds of that happening are very, very low. Why? Well, it actually comes down to you and me.

"While Americans broadly view climate change as a problem and want to see something done about it, they're just not willing to pay all that much to confront the problem."

This is why Australia repealed its carbon tax in July, ending a decade-long battle.

"The repeal is just the latest and most glaring example of the extremely uphill political battle facing any effort to put a hefty price on carbon."

So yes, let's keep pursuing a carbon tax! But please let's not abandon the pursuit of a Plan B if we get wind that some kind of carbon tax has passed. It's sadly not as simple or foolproof as that.

I've heard from a couple of high-up folks that battery storage innovation will be in place to sufficiently scale solar globally to power the entire world in a decade or so. Here's the deal: even in the best case scenario that storage is where it needs to be in 5 years or less (lotta' reasons to be wary of that), the ability to integrate and scale it logistically and economically worldwide in the necessary timeframe is, well, let's just say extremely risky to be putting all of our chips on. I'm all for visionary thinking, but transforming entire energy systems takes time (Vaclav Smil puts it at, on average, 5 to 6 decades). Oh, and let's not forget the latest assertion that battery storage isn't even necessary for solar to power the world. Question: are we really ready to bet the farm on a path where even the world's biggest solar advocates don't entirely agree?

Taking things a step further, the world has abundant, cheap supplies of fossil fuels folks. Don't let anyone tell you otherwise. And countries around the world have consistently demonstrated their intention to continue to use those when it suits their social and political goals, climate be damned. A recent MIT study anticipates that won't be changing anytime soon, with the 7 billion and counting inhabitants of planet earth increasingly demanding more energy (half of whom, it should be noted, currently live in energy poverty).

So while I, as much as anyone, want fossil fuels to be stranded in the ground and the sun's rays to power the world, it's simply not a sensible framework to be working from based on the evidence we have. And it's somewhat mind-blowing to me that any environmentalist would go so far as to oppose a technology to hedge that bet.

Everybody Loves a Good Story

Finally, beware of feel good, but false, stories of progress. As a former journalist, I have folders and folders of stories that simply don't stack up factually, but I'll point to just one because it perfectly illustrates an ongoing story that so many play up as evidence that business as usual is enough: Germany and renewables. As the author writes:

"The rise of social media means that facts are not checked, they are retweeted. Such is the case with renewable energy in Germany, where it appears almost anything is to be believed."

He gets specific about a recent assertion that Germany gets half of its energy from solar panels, supplying credible data that quickly and totally dispels it.

"These statistics make it clear that the 'solar revolution' that has supposedly occurred in Germany is not worth the name, and is mostly just a combination of hype and wishful thinking."

So, I'll close by stating that I understand that selling insurance isn't sexy. Not exactly a grabby headline. But to me, simplistic absolutes in a Level III world is really unhot. It was Mahatma Ghandi who said, "Action expresses priorities." My priorities are digging into hard, headache-inducing, real pain in the ass nuances and pathways around what it's going to actually take to tackle this problem. How about you?