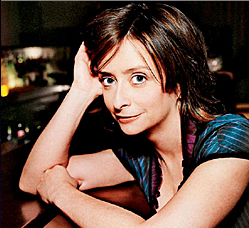 Rachel Dratch, best known for her Debbie Downer character on Saturday Night Live, recently volunteered her comedic talents for a televised public-service announcement. In it, she shows up in a woman's house to chastise her for running her dishwasher before it's full. "By 2013, it's estimated that 36 states will face water shortages," she says. But instead of the familiar trombone-and-frown sign-off, she smiles, and viewers get directed to savewatertoday.org. Dratch, 45, took time out of her busy new-mother schedule to answer a few questions.

Q: How did you come up with Debbie Downer?

A: I was in a conversation, and someone said some really downer thing that just screeched the whole group vibe to a halt, and I thought that would make a good character. When I started doing the character, I'd insert environmental issues because I'd think of things that bum me out. In the very first sketch, we were at Disney World, and I was like, "With that costume on, Pluto's probably in the early stages of heatstroke. Speaking of heat, if this greenhouse effect keeps up, we'll all be living underwater."

Q: What's the trick to bringing out the humor in a depressing situation?

A: I don't know -- I hate trying to analyze comedy in some deep way. If it gets laughs, it's funny. But people do want some sort of release about depressing topics.

A: Probably. Personally, I don't even read bummer news stories about the environment because it makes me feel helpless to fix anything and reminds me that the general population doesn't treat these issues as an important part of our political life.

A: Many comedians have a dark side that lets them take a negative thing and turn it funny. But it's hard to generalize like that, because comedians are as different from each other as regular people are.

A: Anything I got on the air! But I liked "The Lovers" with Will Ferrell a lot.

Q: Do any of the other SNL comics care a lot about environmental issues?

A: I'm not sure. I think Ana Gasteyer does. It's weird because when you're working on the show, it's so all-consuming that my main memory of it is everyone talking comedy and writing and just the whole intensity of it. I've been off the show several years now so that's what I remember, and not someone coming in and handing out pamphlets about the whales or something.

Q: Were there any green measures on set?

A: There were recycling barrels for paper but I have a feeling it all went into the trash. I think people were too involved with their egos to be thinking about recycling. It's even worse on a movie set -- there are 10,000 plastic water bottles floating around every day and no recycling that I ever saw.

Q: What's your next project?

A: I'm writing a book of funny stories that have happened to me.

Q: You donated your time to do a PSA about saving water. Why that issue in particular?

A: Since I was little, it was instilled in me to conserve water. In terms of what can you do as an individual, it's an easy issue to get behind. I had a roommate who would run a dishwasher with just one dish in it. It used to make me crazy, so this happened to hit a nerve.

Q: Has the TV campaign has made a difference in how people use water?

A: It got picked up by 80 TV stations, so hopefully it is making a difference.

Q: Do you think people ever get annoyed by environmentalists pushing their agenda?

A: I don't think so. The environmental agenda seems swept under the rug a lot, and environmentalists are looked at as tree-huggers who aren't dealing with the real issues when in fact someone needs to be keeping an eye on how we're treating the planet. When politicians bring up the environment, they're immediately labeled as being anti-business. But for the sake of the planet on which we live, we need to take the environment into account. I know I sound like the flaming liberal that I am, but I do think this needs to be thought of as a serious issue for future generations.

Q: Has being a new mom made you more aware of environmental issues?

A: Yeah, but I already was pretty aware of them before. It's always been a concern of mine.