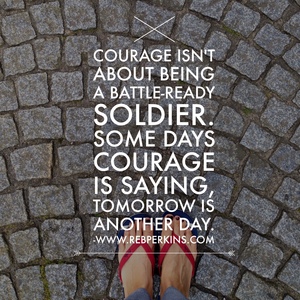 We take so much of our strength and resilience for granted. Courage isn't about being a battle-ready soldier; some days there is courage in saying, "tomorrow is another day". We show courage on a daily basis because our lives and the lives of those we love matter to us. When we feel deeply passionate about something, we find courage easily -- for example we find superhuman strength to protect our children. So let us find that same passion and courage for ourselves, trusting that whatever our circumstances are right now (and regardless of whether we feel courageous), we can find a valuable seam of courage if we dig just below the surface.

I've kept the quote by Mary Anne Radmacher close to my heart, "Courage doesn't always roar. Sometimes courage is the silent voice at the end of the day that says 'I will try again tomorrow'."

I've been called courageous, resilient and brave many times in my life. (I've also been called naive, foolish and crazy!) I want to put the record straight.  We are all courageous, I am no different to you. I was asked one day by a friend, "how to you do it? I just don't have your courage." I thought about it when I got home, I didn't see myself as particularly courageous, but it got me thinking about the meaning of courage and what it meant to me and I wrote down these thoughts in my journal:

Do you see? We are ALL courageous in our own way. What's the smallest possible step you could take to believe in your own courage?

This first appeared as one of the chapters in Best Knickers Always: 50 Lessons for Midlife