When the first lady is attacked for embracing her role as "mom-in-chief" -- despite her leadership in key policy areas like stemming the childhood obesity epidemic, increasing access to healthy food and aiding military families and veterans -- it's time to call foul.

The headline for Michelle Cottle's recent article in Politico Magazine, "Leaning Out: How Michelle Obama Became A Feminist Nightmare," got it wrong. First Lady Michelle Obama isn't a feminist nightmare.

The real feminist nightmare is when women are undermined because they are mothers -- particularly because more than 80 percent of women in our nation have children by the time they're 44 years old.

If feminism isn't for mothers too, then who is it for?

After all, demeaning moms demeans the vast majority of women. And at the societal level, this doesn't just hurt feelings. It hurts pocketbooks. Motherhood is now a greater predictor of inequality than gender in the United States. 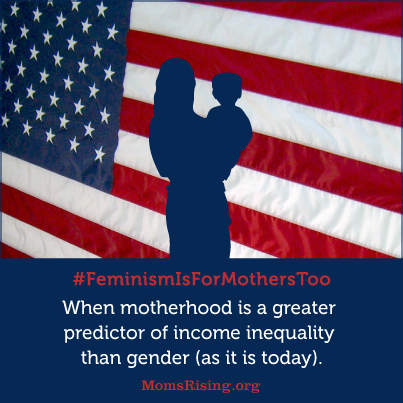 Too often mothers in the workplace have to hide the fact that they have children, tip over the pictures in offices and not talk about their families in order to be taken seriously.

This isn't simply paranoia. Mothers experience rampant wage and hiring discrimination. Studies have found that even when people have identical resumes, education and job experiences, mothers are much less likely to be hired than non-mothers and are offered significantly lower starting salaries. Dads, on the other hand, are offered more. It's no accident that fewer than 5 percent of Fortune 500 CEOs are women; that women comprise only 18 percent of Congress; and that of the last six Supreme Court nominees all the men had children while none of the women did.

In this context, having a first lady who embraces her own motherhood is a boost to the 85 million mothers across our nation. For some, it is even revolutionary. Feminist author Tamara Winfrey Harris shares:

The sexist stereotype of women as demure, sacrificing, quietly strong, beautiful and maternal homemakers has rarely been extended to women of color, much less Black women, whose ancestors were brought here to be beasts of burden. So the idea that you have a Black woman as the nation's mom-in-chief is revolutionary, and I say this as a woman who has no biological children of my own.

As first lady, Michelle Obama is both an inspiration and a lightning rod for critique.

That the current attack against her focuses on her embracing the mom moniker should be no surprise. A Maternal Wall is standing in the way of many taking the first lady seriously. It's also standing in the way of most women ever entering a room with a glass ceiling. Here's what that Maternal Wall looks like in raw numbers for women in the labor force: While most women without children make 90 cents to a man's dollar, mothers make only 73 cents, single mothers make about 60 cents and mothers of color earn as little as 54 cents to a man's dollar.

As a result, families are struggling. Even though for the first time in history women comprise half of the entire paid labor force -- and three-quarters of moms are now in the labor force -- many moms who work full-time still struggle to make ends meet and put food on the table. When women, the primary purchasers in our consumer-fueled economy, don't get paid fairly, then they have less money to spend. This hurts children. This hurts our economy. This hurts us all.

This also leads to one in five children in our nation experiencing food scarcity due to family economic limitations. Access to healthful food is a policy area that the first lady has prioritized, and it's a policy area that is also critically important to mothers. It might be easy to dismiss it as having little substance if the children in your community never experience food scarcity, poor nutrition or debilitating health conditions like diabetes that stem from this. However, since 20 percent of kids in our country go to bed without proper nutrition, this policy area that the first lady is championing matters to a large percentage of women and is indeed a feminist issue, as economic security for women and families is a feminist issue.

Yet the "Leaning Out" article outright dismissed the first lady's work in this area as "gardening" and "evangelizing good eating habits," and the article led one to infer that she has done "so little of substance."

This assessment couldn't be farther from the truth. The first lady's "Let's Move" initiative has directly led to many substantive gains, including the fact that the 50.1 million students in our nation who attend public elementary and secondary schools now will have healthier food in school lunches and in vending machines.

Given that nearly 49 million Americans, including 16 million children, live in food insecure households, the first lady's work to increase access to healthy foods through schools and communities should most definitely not be dismissed as "gardening."

Childhood obesity is another area of the first lady's work that has significantly more substance than the "home-grown vegetable" image the "Leaning Out" article presents. Nearly one in three children, which is more than 23 million adolescents and children in the United States total, are either obese or overweight, placing them at increased risk for serious diseases such as diabetes, heart disease, cancer and stroke. Lower-income communities are particularly at risk.

This is a public health emergency that millions of mothers across the nation care about deeply.

In this policy area, reports show that the first lady's "Let's Move" initiative is successfully fighting childhood obesity on many fronts. Not only has the initiative helped lead to more healthful school lunches and food; it also has increased the number of schools that are meeting the HealthierUS Schools challenge in nutrition and fitness (3,300 schools met the standard in 2012, with more coming on board); worked with grocers to build or expand 1,500 stores in communities with limited access to healthful food (reaching more than 9 million people and creating thousands of jobs); educated and engaged childcare professionals and organizations in the implementation of new criteria for nutrition and physical activity; successfully worked with restaurants, hotels and corporations like Disney to improve nutrition quality and address food marketing toward kids; made salad bars available to more than 700,000 kids in schools; helped make nutrition guidelines clear to parents; worked with the Department of Defense to improve food nutrition for those who serve our country; and more.

This work is having a cumulative impact with positive results. A recent study found that the childhood obesity rates have dropped in 18 states.

"The first lady has very effectively used her bully pulpit to put children's health front and center. People in communities all over the country have responded to her call to take child health seriously and we're already seeing results. When children are healthier, the benefits ripple out to whole communities," noted Lori Dorfman, director of Berkeley Media Studies Group, part of the Public Health Institute.

Is the first lady perfect? Of course not. No one person could take on all that needs to be done in our nation; nor will everyone be satisfied with her priorities.

Is the first lady being unfairly judged? Absolutely. We live in a nation that so deeply devalues caregiving and motherhood that embracing motherhood is being used as an excuse to accuse the first lady of treason against the feminist movement.

Motherhood is also too often used as a wedge between women. While only 9 percent of women make more than $75,000 per year, the mothers who are in that top 9 percent often have the most life choices due to their relatively high economic status, and those mothers often get the most criticism and attention in the mainstream media. As author Joan Blades notes, "When mothers choose to 'lean in' to high pressure jobs that entail working long hours, they often have guilt heaped upon them for supposedly neglecting their children. And when some choose to adjust their careers to have more family and personal time, they're often accused of betraying feminism. It's damned if you do, and damned if you don't."

Kirstin Larson, a Seattle mom, has this to add: "As a corporate executive-turned-mom-in-chief of my own household, I've grown weary of every woman's life choices being judged using the lean in/lean out litmus test. Would it be more acceptable for the first lady to be mom-in-chief or to work on childhood obesity if she was less well-educated? If she had not had a successful career? She chooses to support her family, country, and community in a hands-on way. She should be thanked, not judged."

Larson concludes, "I thought the point of feminism was to rally against prescribed roles for women and to gain enough economic and societal equality to define our own paths."

There are deep complexities with motherhood itself in our nation. Joya Misra, professor of sociology and public policy at the University of Massachusetts, shares findings from recent research: "When black women appear to step back from the workplace they are excoriated and when White women step back they are celebrated. Michelle Obama is negotiating extremely tricky terrain and the 'Leaning Out' piece belittled her work in ways that were extremely inappropriate."

Given this complex reality, in which there is also heightened wage and hiring discrimination against all moms and the work of caring is greatly undervalued, it's not so very surprising that a woman, in this case the first lady, who frames her contributions within the tricky terrain of motherhood is discounted.

One thing is clear: First Lady Michelle Obama is not the feminist nightmare. The real feminist nightmare is that motherhood is now a greater predictor of inequality than gender, and we have yet to shine a bright enough light on this type of discrimination to address its rippling impacts.

The real feminist nightmare is that women like the first lady are attacked due to their work on policies that are important to mothers everywhere, just because those policies are priorities for moms.

The real feminist challenge is that so much more needs to be done by all of us to achieve equality and family economic security.

Motherhood is the unfinished business of the contemporary feminist movement.

Feminism is for mothers too.

---
This article was first published in POLITICO Magazine. Kristin Rowe-Finkbeiner is executive director and co-founder of MomsRising.org, a grassroots organization working for family economic security and to end discrimination against women and moms.