The success of New York's High Line -- a stretch of abandoned elevated railroad on New York's West Side that has undergone a Phoenix-like resurrection to become one of the city's most popular destinations -- has generated much conversation about the so-called "High Line effect." Several cities are looking at their own long-disused sections of track, hoping they can literally replicate New York's success. Perhaps, but that narrow interpretation ignores the confluence of unique factors that made New York's' High Line an instant classic.

In fact, the "High Line effect" should be viewed more broadly as a holistic approach to urban design that suggests how to transform existing urban landscapes to meet contemporary needs. The High Line was almost magically reawakened by a team of landscape architects, architects, horticulturalists, engineers and others, led by James Corner Field Operations. What really happened there is, first and foremost, a triumph of historic preservation and design. And, it's a big win for design ingenuity over the more commonplace tabula rasa approach that results in bulldozed sites and the eradication of cultural narratives. So what is the take-away?

Wedding historic preservation and design can yield transformation and innovation, but that requires an overarching vision and shared values. Too often, however, the public and the media are presented with polarizing either/or scenarios, with opposing camps -- preservationists and developers/designers -- facing off like sumo wrestlers. That's an artificial divide spun by bureaucrats and frequently fueled by media that relishes controversy.

The High Line proves that a site-specific, adaptive reuse approach is a viable holistic alternative that embraces both change and continuity -- and it's not an isolated success story. San Francisco's Crissy Field was a derelict concrete and asphalt airfield; after a $34 million transformation in 2001 designed by Hargreaves Associates, it's a must-go-to destination that connects San Franciscans with their industrial waterfront heritage while restoring and conserving its natural and ecological values.

Over in Pittsburgh, the 36-acre Point State Park, was for much of the 20th century dotted with warehouses and railroad tracks, and home to the city's two oldest structures: Fort Pitt and Fort Duquesne. Following 20 years of design development overseen by landscape architect Ralph Griswold, this iconic waterfront park opened to the public in 1974, with Griswold dubbing his design "ultra modern."

Over the past decade, additional work has been done: a $32 million project in 2008 reopened the walkway over the Allegheny River and filled in the Fort Pitt Music Bastion to provide more lawn space. 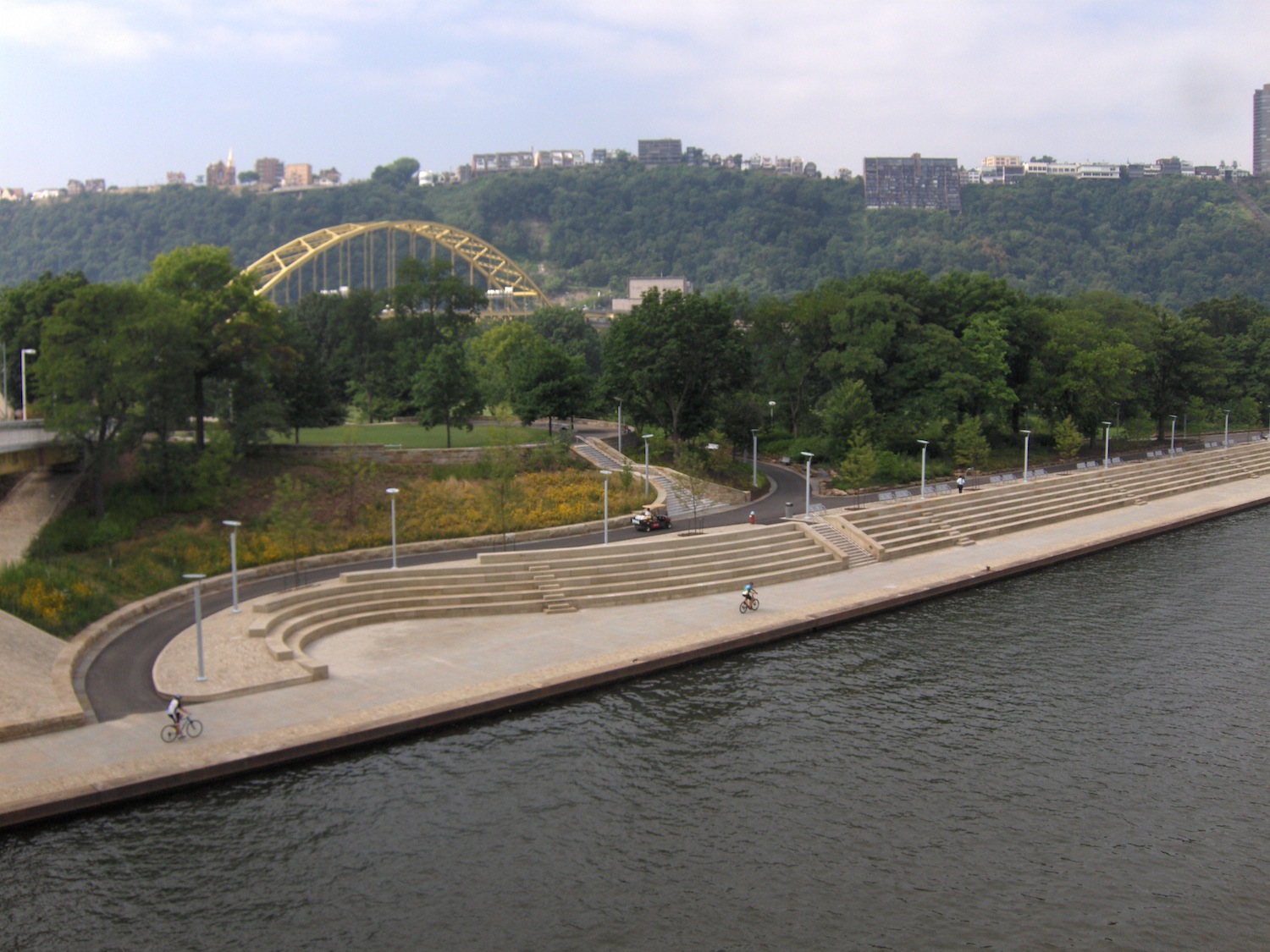 Right now, the finishing touches are being installed on an $8.9 million adaptive reuse plan. The current work by Pressley Associates of Cambridge, MA, maintains Griswold's design intent while providing increased access throughout the park and to the waterfront, an embracing of the landscape's heritage through sympathetic change and continuity.

Kiley Garden before (left) and during first phase of rehabilitation (right). Before image reproduced with permission of Reynolds Smith and Hills, Inc.; first phase image courtesy The Cultural Landscape Foundation. 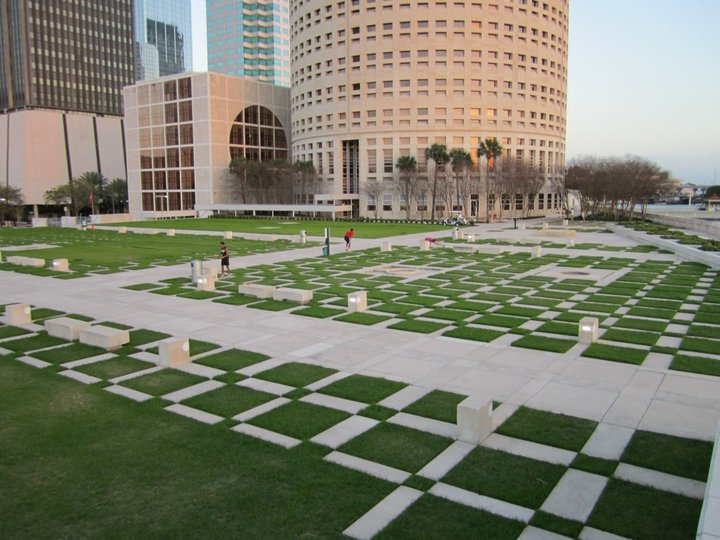 Recent examples include Tampa's NationsBank Plaza, designed in the late 1980's by Dan Kiley and today known as Kiley Garden, which has undergone the first phase of a $4.3 million renaissance. A two-story garage beneath the park has been rebuilt, while 600 "in-planters" have been reconstructed and re-engineered to insure the plantings' sustainability and the plaza's network of water features.

Forth Worth Water Garden before (left) and after (right). Modifications made the water feature safer. Images courtesy The Cultural Landscape Foundation.

Philip Johnson's Water Garden in Fort Worth, TX, Texas reopened in 2007 after critical modifications were made making the park safe while maintaining the original design intent.

Other examples of sensitive reuse include a biomorphic water feature in Mitchell Park in Palo Alto, CA and the current work at Pittsburgh's Mellon Square, the nation's oldest surviving modernist garden plaza over a parking structure.

Despites these successes, municipal officials and developers still blandly repackage the either/or scenario -- preserve or build anew -- to the detriment of extant, unique, regional expressions of landscape architecture and architecture that could otherwise be creatively reused (a more sustainable solution). Can't we measure success by recognizing that an authentic historic site -- which communicates a powerful sense of place -- can and should be sympathetically transformed? When did historic preservation values become such a negative?

A trend is emerging around the country, existing regulations that are the backbone of preservation planning are being targeted, demolition orders issued and preservationists derided as anti-change. 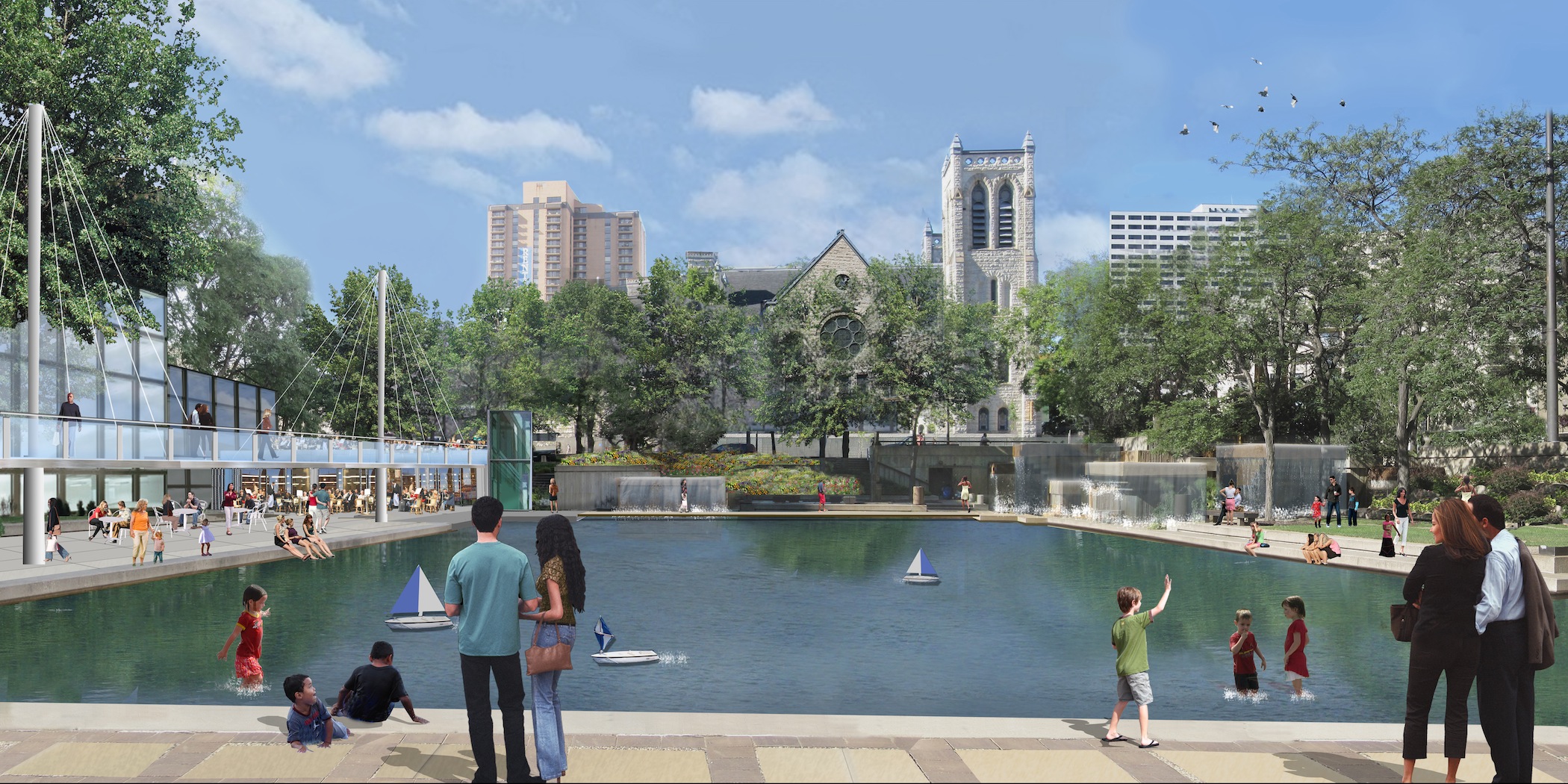 Current plans by the City of Minneapolis call for the site's demolition. M. Paul Friedberg, Peavey's original designer has developed alternative concepts that would retain many of the site's signature design elements while adding new features including an elevator and an elevated walkway (above left) to address accessibility concerns. Image courtesy The Cultural Landscape Foundation.

The fate of Minneapolis' modernist icon Peavey Plaza, about which I've written previously, is symptomatic of the larger problem. Odd twists of logic are being employed to justify Peavey's demolition such as this all-purpose and oft-repeated one: "Peavey Plaza could not legally be built today" because it doesn't meet contemporary codes (this is an irrelevant distortion in search of a problem). Moreover, the Minneapolis City Council, which has not demonstrated any appreciable understanding of preservation, recently overturned an 8-1 vote by the city's Heritage Preservation Commission (the preservation experts) delaying demolition.

Concurrently, the New York Landmarks Conservancy and other New York-based groups have sent out alerts warning that, "The Real Estate Board of New York (REBNY) has put together a coalition of construction, union and landlord groups to challenge the City's 1965 Landmarks Law. They seek, in effect, to give development precedence over protection of New York's landmark buildings and neighborhoods." And in Louisville, efforts are underway to strip power from the Landmarks Commission (the preservation experts).

Noted landscape architect Laurie Olin suggests that when contemplating changes to an urban landscape that has a history, the conversation should address what stays and what goes and the virtues of bringing something new or an addition to an extant site. Unfortunately, we're seeing the conversation increasingly moving towards how to facilitate demolition.

How do we mend this false divide of preservation vs. design and break down the silo mentality that stifles creativity and site-specific innovation? Who should educate and lead? 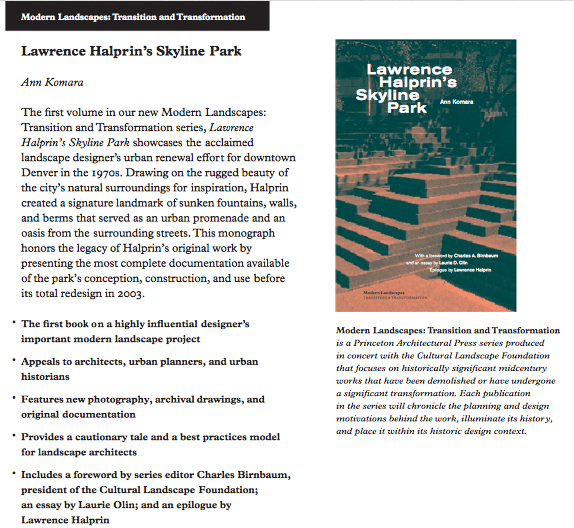 To advance this conversation Princeton Architectural Press and my foundation have developed a series, Modern Landscapes: Transition and Transformation, that focuses on historically important midcentury works that have been demolished or have undergone a significant transformation. Each publication in the series will chronicle the planning and design motivations behind the work, illuminate its history, and place it within its historic design context.

Skyline Park before (left) and after (right). Images courtesy The Cultural Landscape Foundation.

The first site examined is Lawrence Halprin's Skyline Park in Denver, which was largely and unsympathetically redesigned in 2003 at the behest of area business owners. After nearly a decade, is Skyline any better? What have we lost and what have we learned? Has there been a return on investment that supports this intervention? Having visited the site numerous times since 2003, I can say that visitors are not giddy with delight as they are at the High Line, Crissy Field or Point State Park. Indeed, I've heard many expressions of "buyer's remorse." That's clearly a concern of Cam Gordon, the one Minneapolis City Council member to vote against Peavey Plaza's demolition, based on his quote in the June 13, 2012 Architect's Newspaper: "I have seen many time where the city has been quick to demolish something and then later we wish we hadn't."

Now is the time to assess these actions and decisions. The new Modern Landscapes series, which will also examine Pittsburgh's Mellon Square, the Charlottesville Mall in Virginia, and, Peavey Plaza, will promote an evaluative process that values change and continuity. We have a responsibility to understand the combined role of historic preservation and design, since we are the stewards shepherding our shared landscape heritage in to the future.

If you know of other post war projects that have been successfully transformed we want to hear from you.