New breakthroughs in technology have a long history of disrupting the status quo. When I first learned how to type, it was on a manual typewriter that, if you hit the carriage return handle hard enough, might fall off the desk. Having progressed through Selectric technology (with changeable fonts) and customized "accounting" typewriters with extra-wide carriages and the ability to tab to the next decimal point, I was thrilled when word processing programs hit the marketplace in the 1980s.

When Shakespeare's famous tragedy, Macbeth, was first performed in April of 1611, women's roles were still legally required to be performed by men. Technologies upon which today's theatres rely (body mikes, fog machines, strobe lights, video projections, digital mapping, sound design, etc.,) had yet to be invented. More than 400 years after its premiere, it is fascinating to see how changes in stagecraft have altered the face and feel of Macbeth.

Today's stagecraft allows theatre artists to create sounds and images of much greater depth, ranging from thunderstorms with real rain to cinematic sequences projected on walls and screens. There can be no doubt that Macbeth (a tragic tale of witches, ruthless ambition, ghostly apparitions, and political rebellion) demands special effects. 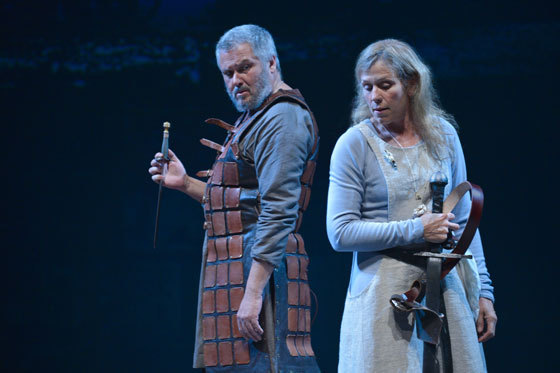 The Berkeley Repertory Theatre recently unveiled a new, state-of-the-art production of Macbeth designed by Douglas W. Schmidt with costumes by Meg Neville, lighting by Pat Collins, music and sound design by Dan Moses Schreier, and video design by Alexander V. Nichols. As the audience entered the Roda Theatre, they were greeted with an ominous soundscape that delivered an appropriately oppressive sense of foreboding. At various points during the performance, one could hear the caws of crows coming from different parts of the auditorium and see an army of winged blackbirds take flight in the forest. It made one feel as if Alfred Hitchcock had returned from the grave to haunt downtown Berkeley with some unused footage from The Birds. 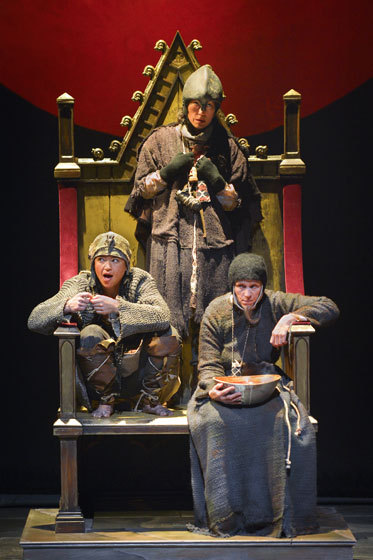 Although the procession of kings descended from Banquo was depicted quite splendidly, there are times when even the best technology can deliver unexpected results. 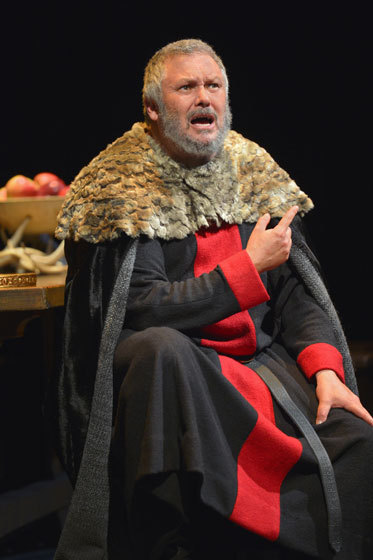 Conleth Hill in the title role of Macbeth
(Photo by: Kevin Berne)

Dramaturg Barry Kraft (who astutely points out that Macbeth and his wife each die in isolation) notes that:

"I was a conscientious objector who refused induction during the Vietnam War, but I've been thinking about war and warfare all my life. How do you go from being a killer of human beings (with ease) to ingratiating yourself in society and saying, 'No, that is a wrong activity now, even though it was right before, and it could be right again?'

Macbeth is so troublesome to me. It's a burning question of how you can go off and kill (in hand-to-hand combat) so many humans and get such high praise for doing so, and then come back and say 'Well, why is it bad now? If I perceive this person to be my enemy, and I could be king -- as I seem fated to be -- why is it a bad thing to exercise my skill in taking him off?'" 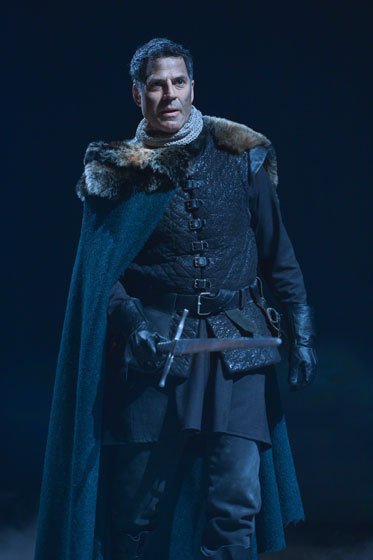 Christopher Innvar as the soon-to-be murdered
Banquo in Macbeth (Photo by: Kevin Berne)

Many things surprised me about Berkeley Rep's new production of Macbeth. With the exception of a banquet table placed at an angle to the stage, the scenery frequently necessitated entrances and exits on a purely horizontal line (much like a ro-ro apparatus for container ships). While Conleth Hill's Macbeth seemed to survive on macho bluster, his acting was no match for the intense focus of Frances McDormand as Lady Macbeth. 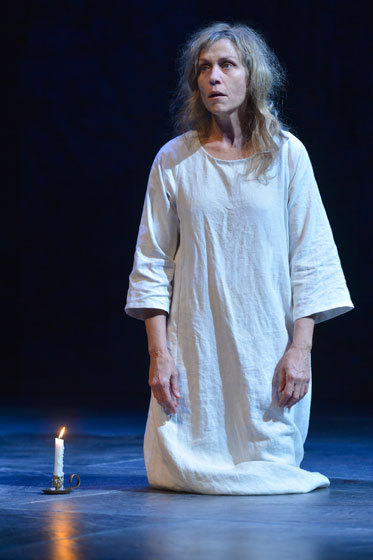 For me, the greatest irony was how, despite a renowned Shakespearean director, some excellent work on projections and sound design, and a committed cast, Berkeley Rep's production kept losing steam and failed to excite. It could not hold a candle to Verdi's adaptation of "the Scottish play." If you've never heard Macbeth sung before, watch this production from the 1972 Glyndebourne Festival Opera (starring baritone Kostas Paskalis and the great Josephine Barstow as Lady Macbeth). Although the subtitles are in Spanish, the music is what really matters.

From Act I's opening witches' chorus and Lady Macbeth's letter scene ("Vieni! t'affretta!") to the moment when Banquo's ghost appears at the banquet; from Lady Macbeth's sleepwalking scene to the stirring choruses ("La patria tradita" and "Salve, o re!"), Verdi's score does a far better job of capturing the seething ambition of the Macbeths, their bloodthirsty attempts at social climbing and their unquenchable lust for power, the tragedy of the Scots, and the perverted political processes predicted by the three witches with startling clarity and depth.