Fans have been clamoring for a new "Real Housewives" city for some time, and after several years since a new city has premiered, "The Real Housewives of Potomac" has arrived. With six fantastic and outspoken women on the cast, it would be hard to stand out. Giselle Bryant has absolutely no problem doing that though. She sat down to chat with us about what it's like be an official "Housewife", how these ladies will stand out from the other cities, and what it was like for her family to experience life in front of the Bravo cameras. 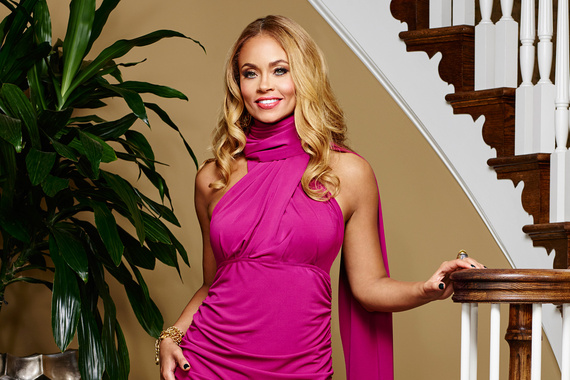 Gizelle, you are one of the most buzzed about Housewives on "The Real Housewives Of Potomac" cast. How does it feel to be the new potential "favorite Housewife"?
Oh my God I love you! I feel spectacular; I am actually very excited. We are officialy on the countdown to premiere day!

Has it sunk in that you are actually going to be a part of the actual "Real Housewives" franchise?
Yes it has. It's been a long time coming actually, so now that the day has arrived, I could not be happier.

So tell me what the road is like for you to have gone from being a preacher's wife to a "Real Housewife"?
It's insane right? My husband (Jamal Bryant, pastor of the Empowerment Temple AME Church in Baltimore) and I got divorced, but prior to being a preacher's wife I was a born and raised Catholic girl. So actually, it's much stranger that I became a preacher's wife! We've been divorced seven or eight years now and we both are living our own separate lives. Now I get to join "The Real Housewives Of Potomac". Life coudn't get any better.

Did you follow "The Real Housewives Of D.C." when it was airing several years ago?
I did follow it, I saw maybe three or four episodes of it. To be honest, I didn't understand it, and I really couldn't connect with it. I do know one of the Housewives, Stacie Turner socially.

Many would think that "The Real Housewives Of Potomac" is going to be a reboot of "D.C" but based on what I have seen in the first episode, it's very different.
Oh absolutely. I think it's a dfferent feel, and four out of the six of the other ladies knew each other prior to when we began filming. Robyn (Dixon) , Charrisse (Jackson-Jordan), Karen (Huger), and myself all knew each other, so the chemistry was already there and did not have to manufactured. I think that is one of the biggest differences really. From what I understand, many of those ladies didn't really know each other I think. With that being said, when we get mad, we are legitimately mad, because we previously knew each other.

For those that have only seen the trailer and are eagerly anticipating the premiere on January 17th, how would you describe "The Real Housewives of Potomac" to them?
I would say that the ladies on the cast are six beautiful, dynamic, women that are all at very different places in their lives. While we have Ashley (Darby) who is very young and married, we have Katie (Rost) who is dating and in a very serious relationship. Then on the other hand, you have someone like me who is divorced. I think overall, people are able to idenfity with at least one of us. We are women who are opinionated and proud of who we are, with whatever our opinion is. We also like to have a good time, which is also a plus! 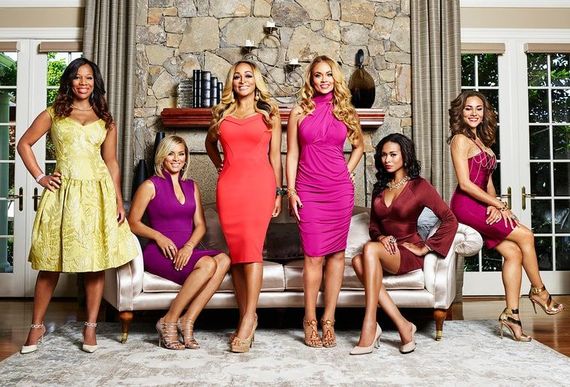 Are you a fan of the "Housewives" franchise as a whole before being cast on "RHOP"?
Oh yes, I'm a big fan of "Real Housewives of Atlanta"; They make me laugh and I love Nene Leakes, she's a funny lady! I also love "Real Housewives of Beverly Hills"; I'm a true fan of Kyle Richards. I feel that she and I could idenfify with each other, she's raising three girls, I'm raising three girls also. She seems really cool, really fun and someone you would want to hang out with!

Speaking of your daughters (Grace, twins Angel and Adore) how are they dealing with the fact that their Mom is about to me one of the "coolest" Housewives around?
It's funny because they always are sure to tell me that I'm NOT cool LOL! If I become "cool" in my daughter's eyes, that a major plus in this house. They have been really shocking to me about the whole thing actually. They are shy girls, and I thought that when production just takes over your house and your life, I thought they would be shy as well. They weren't though; they were fun and funny and they had a good time with it. I don't know how they will react to the outside world now knowing who they are, but we're going to go through it together.

You mentioned production coming in and somewhat taking over your lives. Was it hard for you and your family, on the first day of shooting to adapt to that many people in your home documenting everything?
Absolutely. I really think that anyone that tells you any different is lying. Just to give you a little insight on my first day, my day started at 5:30 a.m. I was getting kids ready for school, and I was freaked out a little bit. My oldest daughter had just sprained her ankle so she was on crutches. She fell down the steps, and it was a true disaster of a morning. it was definitely like trial by fire, and after that day, I could do anything they wanted.

The one thing I am sure to tell all of the new "Housewives" that I talk to is to be prepared for the onslaught of gay male fans. We notoriously love our "Housewives" and are proud to be one of (if not the largest) Bravo demographics.
I love that; I love the gays, I love them! I'm hoping at some time you will see my gay best friend, he does my hair, he filmed with me a couple times. He is the absolute best! I hope the gays love him too!

Since becoming a "Real Housewife" life has been a whirlwind for you I'm sure. What's one word you would use for your life right now?
Fascinating...