For the past two years, Al-Qaeda affiliate Jabhat al-Nusra has, to all intents and purposes, adopted a surprisingly pragmatic strategy in Syria, focused on maintaining at least tacitly cooperative relationships with opposition actors of all stripes.

Its first six months of publicly claimed operations (January-July 2012) saw it act as a typical terrorist organization, killing dozens of civilians in large urban bombings and raiding civilian targets affiliated with the government in Damascus. However, such tactics ostracized Nusra from the wider armed opposition in Syria and beginning in August 2012, Nusra changed. It began playing prominent frontline roles in more insurgent-type operations and military assaults in tight coordination with nationalist Free Syrian Army (FSA) factions as well as groups along the entire rest of the ideological spectrum, from Sufis, to moderate Sunni Islamists, to Salafists and other likeminded jihadists.

This strategic and presentational shift worked with almost brilliant effect. Four months later in December 2012, the U.S. State Department designated Nusra as an alias of Al-Qaeda in Iraq (AQI), and thus as a terrorist organization. The following Friday, instead of rejoicing in this labeling, opposition-supporting civilians across Syria banded together for protests, united under the theme "We are all Jabhat al-Nusra."

Subsequently, the practical disintegration in influence of FSA groups and the rise in stature and power of Islamists and Salafists throughout 2013 served to further intensify Nusra's popularity and influence. Its consistent lead role in successful operations and near-total avoidance of hostilities with moderates offered it an opportunity unrivalled by any other Al-Qaeda affiliate in history.

But in the last few months, things have changed quite considerably. 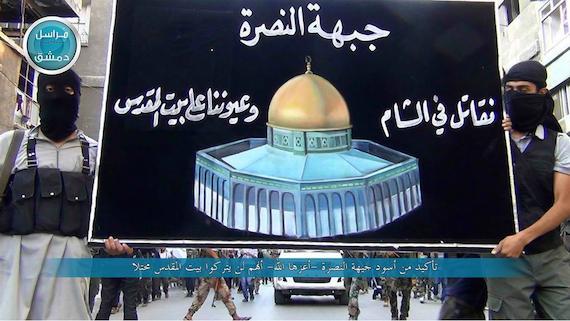 Today, Nusra appears to no longer represent one single distinct organization. Its expansive presence across different areas of Syria is increasingly resulting in the appearance of several different guises with no sign of a centrally designed or implemented strategy. ISIS' dramatic victories in Iraq, its declaration of a Caliphate, and its rapid offensive against Syrian military bases in Hasakah, Raqqa and Aleppo poses an almost existential challenge to Nusra. It would be naïve to think Nusra will disappear, but instead, the group is evolving quickly and its trajectory appears to signal a progression towards the better-known image of Al-Qaeda.

Despite the apparent emergence of marginally different Nusra factions across Syria, one thing has consistently emerged -- the group appears to be adopting a dramatically more self-interested and assertive posture. This has been particularly noticeable in two areas of the country, along the borders with Jordan and Turkey -- locations that are unlikely to be a coincidence.

Since early 2014, Nusra began enforcing its influence with increasing confidence in the southern governorate of Deraa bordering Jordan. There, Nusra has exploited heightening levels of frustration and disenchantment among moderate rebels over what they see as dramatically insufficient assistance being provided to them by the U.S.-led joint operations room in Amman, Jordan. Small and localized defections to Nusra in both Deraa and neighboring Quneitra have bolstered the group's confidence considerably and on occasion, Nusra has struck out against moderate units and individuals it has deemed to be opposed to its presence.

By and large, however, Nusra is not directly confronting moderates or its perceived opponents within opposition circles, but simply acting to undermine their influence over society and conflict dynamics. The formation of the so-called Southern Front on February 13 2014 as an unofficial coalition of ideologically aligned FSA groups appeared a positive step at the time, but it has largely failed to represent much more than a call to external supporters for funding and equipment. Granted, a select number of the front's member groups have received additional support since, but it has been vastly insufficient to transform the battle with the government or to restrain the steadily rising influence of Nusra.

Whether coincidental or causational, Nusra's expanded and more self-confident posture in southern Syria appears to have come during a period when the preeminent focus of Western support to moderate elements of the military opposition has shifted northwards.

That brings us to the second area of Nusra's overt shift in posture, which within the current context, should be of serious concern to the international community. Nusra's role in the northwestern governorate of Idlib, bordering Turkey, has long been significant and rooted within communities. But in recent weeks, it has grown increasingly domineering and audacious. In the last 10 days of July, for example, Nusra fighters have begun unilaterally asserting control over five towns (Binnish, Harem, Sarmada, Darkoush, Salqin) in northern Idlib, all of which happen to be located along the Turkish border. It has also militarily fought, and defeated, a number of localized factions affiliated with a principal recipient of Western military assistance, the Syrian Revolutionaries Front (SRF).

This assertion of control -- and also increased implementation of Sharia law -- is almost certainly a reaction to an increasingly evident expansion in the level of lethal and relatively sophisticated military assistance being provided to moderate rebels by the U.S.-led Military Operations Center (MOC), based across Idlib's border in Hatay. While this assistance is nothing new -- having begun in late 2013 -- the very fact that it has continued and indeed expanded over a period of nine months is a cause for concern for the Al-Qaeda affiliate.

After all, its previous allies in the Islamic Front appear to be suffering from a reduction in funding and a deleterious bout of internal division, most of which is the result of external pressure to cease cooperation with prohibited terrorist organizations like Nusra. While the MOC's military assistance is clearly intended for bolstering battle fronts with the government and not for fighting jihadists, the assistance itself has facilitated a fairly dramatic rise in influence of these moderate rebel groupings. That the two main recipients of this lethal assistance -- the SRF and Harakat Hazm -- are rooted in Idlib, makes this of particular concern to Nusra.

Macro and micro-level conflict dynamics in Syria are fluid and constantly shifting. But until recently, the role of Nusra had been relatively predictable. The dramatic rise in power of the Islamic State and its declaration of a Caliphate has posed a significant challenge to Nusra, not the least of which is its ability to compete in terms of proving its intent and capability to match such territorial control and social-level governance. Already, Nusra's once presence in the Qalamoun, much of which was forced into eastern Lebanon in late April, is rumored to have become very close to the Islamic State, as evidenced by recent events in Arsal.

Meanwhile, a great deal of attention has been paid to the threat that the Islamic State poses to Al-Qaeda's central leadership (AQC) and to the organization's capacity to represent the bulwark of transnational jihadism. Since ISIS' arrival onto the Syrian scene in April-May 2013, AQC has sought to bolster the legitimacy of Nusra, including by dispatching a number of prominent veterans and senior commanders into northern Syria. While it remains largely invisible, Nusra and AQC have managed to establish a new base for these senior-level figures, all of whom have a significant history within an organization whose focus has long been on destabilizing the near enemy, but crucially, on posing an active threat to the security and interests of the far enemy.

The very apparent Western-led bolstering of moderate rebels on the condition that they cease all relations with jihadist groups is a clear threat to Nusra's long-term viability in Syria. Likewise, the rise of the Islamic State and its far superior capacity to recruit individuals from across the globe and to govern what arguably now amounts to a proto-state, challenges the very reason for Nusra's existence.

Not since early 2012 has Nusra faced such challenging circumstances and it seems likely now that we are witnessing the transformation of Nusra itself and what it publicly stands for. If this proves to be accurate, then the fundamental dynamics of the Syrian conflict are set for yet another significant change. The group's focus on securing dominance over key municipalities in Idlib along the Turkish border points to an attempt to isolate rebels from the MOC supply line through the Bab al-Hawa crossing and potentially also to take advantage of this period of disunity within the Islamic Front.

Unfortunately however, if it hasn't already begun, this looks almost inevitable.

Charles Lister is a Visiting Fellow at the Brookings Doha Center in Qatar. Follow him on Twitter at Charles_Lister