WHERE THE JOBS ARE: Solving Society's Problems for Potential Profit

Job creation in the U.S. remains challenging. According to the Bureau of Labor Statistics, business and government employers only added 69,000 jobs in the last reported month (May 2012), continuing a three month trend of declining job growth that barely keeps pace with the 90,000 net job hirings monthly that are necessary to absorb the growth of the labor force. However, a closer look at the historical data highlights a bright spot in the employment landscape of the United States. Businesses and organizations that are solving society's problems and making a positive impact on the world are the consistent engines of positive job growth.

Recent Downturn is Not like Post-WWII Recessions: A New Approach to Job Creation is Needed

When employment data is plotted on a graph, the differences between the "Great Recession" and every other downturn the U.S. has experienced since WWII are clear. Jobs were lost on a much greater scale during the "Great Recession," and the subsequent return to full employment is moving at a glacially slow pace. After four years, the U.S. economy has barely managed to make a dent in the "jobs gap." By contrast, at this point in the economic cycle, every other post-WWII recession had managed to return to its previous jobs peak. A new approach, which recognizes where the jobs are in the 21st Century economy and how to design policies to stimulate further job creation, is needed. 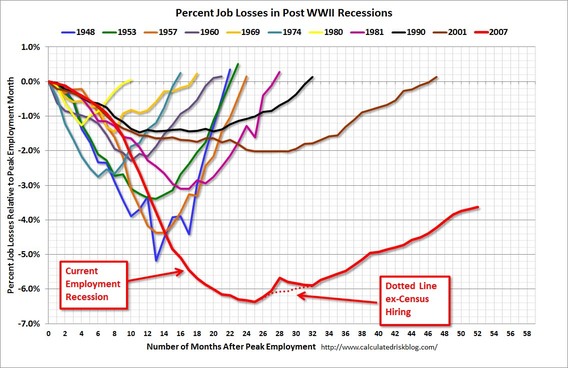 The U.S. was only able to reverse the unemployment crisis during the Great Depression with President Franklin Delano Roosevelt's New Deal policies -- and later a gearing up of the war economy. No U.S. agency collected official statistics on the labor force during the Great Depression, but estimates of the unemployment rate during the 1930s have been provided by economist Michael Darby. Although these numbers are not perfect, they provide a glimpse into Depression-era labor force patterns. The shift in the unemployment rate in the 1930s required drastic action and major economic shifts, and the same mentality is needed today to move the U.S. toward full employment and a vibrant economy. 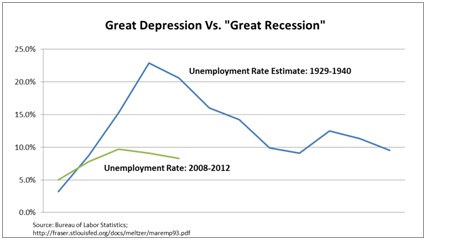 At least three out of 10 jobs in the U.S. economy focus on building a better world. These positive-impact jobs come from both the public and private sectors. Government jobs are traditionally considered positive impact, as they focus on providing citizens with much-needed education, infrastructure, and social services. U.S. government jobs accounted for 22 million of the 130 million non-farm payroll jobs reported in 2011 and made up just over half of the total jobs that helped to improve society. However, much of the positive impact in today's world is increasingly the result of private industry innovations. In 2011, approximately 21 million of the 110 million jobs in the private industry positively affected society. This private industry contribution primarily came from the sub-sectors of health care, education, and social assistance services, but it also includes positive-impact sectors like utility system construction, environmental waste remediation, and grant-making institutions. (U.S. jobs data from the Bureau of Labor Statistics, bls.gov, combines both for-profit business and non-profit social-sector organizations under one category of "private organizations.") 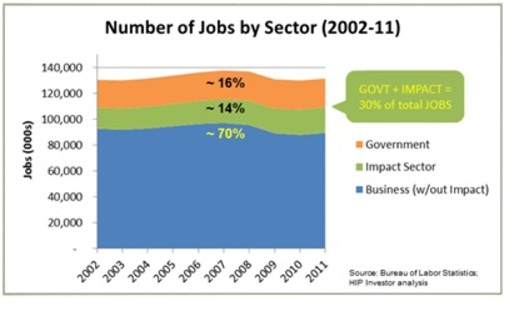 Furthermore, business- and social-sector organizations from the private sector that have focused on dealing with society's problems and solving human needs have been adding jobs at a faster rate than the private sector in general over the past decade. According to HIP Investor's analysis of annual jobs data released by the BLS between 2002-2011, jobs in the positive-impact subsectors of the U.S. economy have grown by 21 percent(2 percent annually) while total private industry jobs subtracting the impact sector have fallen by -3.7 percent (-0.4 percent annually). The "Annual Year Over Year Growth in Jobs by Sector" graph below shows the differences in annual growth of the impact sector, the government, and private industry (excluding the impact sector). Note that the impact sector is the only sector to have grown in every year, even during the "Great Recession." 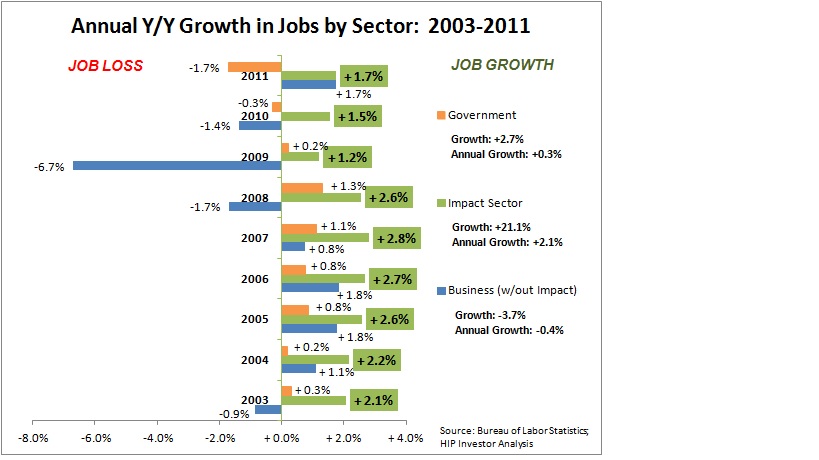 Organizations in the impact sector have come up with compelling solutions to society's needs, but they often lack scale. Even though the impact sector job growth is impressive, it still employs far fewer people than the business sector as a whole.

A recent policy note written by Pavlina Tcherneva at the Levy Institute of Bard College advocates for full employment through a partnership between the government and social entrepreneurs. The government would give grants to nonprofit organizations, which would then use the money to fund social entrepreneurs who would apply market principles to solve social, cultural, and environmental problems. Tcherneva argues that the "objective of these social entrepreneurial ventures would be to put those individuals whom the private sector has declined to employ into socially useful projects that fill some unmet public need."

This is a well-intentioned proposal. However, the government sector has been shedding jobs and reducing state and local funding since the beginning of the "Great Recession." As Jonathan Cohen points out, "one obvious distinction between this recovery and that from the most previous recessions is the sudden and sharp downsizing of the public sector workforce. Instead of hiring more workers to boost growth and reduce unemployment, local and state governments have been laying off workers during this recovery." The shrinking public sector cannot be relied upon exclusively to fund positive impact solutions, including those in education, where state and local governments are cutting jobs faster than the overall government average. 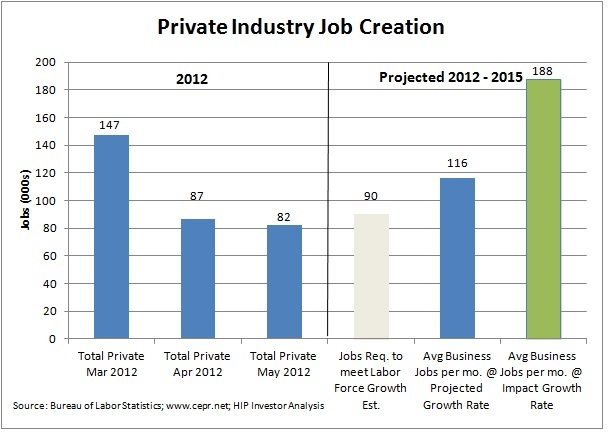 The most viable -- and inspiring -- option for job growth is spurring private industry to focus on creating positive impact through their businesses. Solving human, social and environmental problems is much needed, and also compelling for employees. More than nine of 10 new graduates want to work for a company that "does good" in their daily operations. Even during the "boom years" of 2002-2007, the impact sector outpaced the business sector in job creation.

Businesses have the widest access to capital markets, and can allocate it to untapped opportunities with remarkable speed. In addition, businesses that partner with impact-sector organizations or pursue projects with the potential for positive impact can realize the value that directly flows from being able to effectively meet the pressing needs of consumers.

For example, Michigan Energy, Michigan Jobs, a bipartisan coalition of businesses, labor organizations, and health care advocates, is supporting an initiative to expand Michigan's renewable energy production from the current rate of 3.6 percent to 25 percent by 2025. Studies suggest that "increasing [Michigan's] use of renewable energy will create thousands of jobs for Michigan workers and attract $10 billion in new investments." Forward-thinking investments like this have begun to provide a state that was hit especially hard by the recent economic downturn with viable solutions that have the potential to make a large impact. Almost 30 local companies have entered the Michigan market to produce solar panels and wind turbines. According to the American Wind Energy Association April 2012 report, the top ten wind energy states employ between 42,000 to 52,000 workers. Approximately, 10 percent of these wind energy jobs can be found in Michigan.

Estimating the change in the national unemployment rate is difficult, because it is affected by so many factors. However, HIP Investor's initial analysis suggests that if the private sector job growth continues at its long-term historical rate (approximately 1.25 percent), the U.S. economy will not reach full employment until 2020. However, if that growth is accelerated, applying the impact sector's annualized job growth rate (approximately 2 percent), then the U.S. could reach full employment by 2015. On the other hand, if private sector jobs only grow at the rate that they did during the most recent expansion (2002-2007), then the U.S. could continue to stagnate and may delay full employment even more -- the annual growth rate would barely be enough to keep up with the expansion of the labor force. 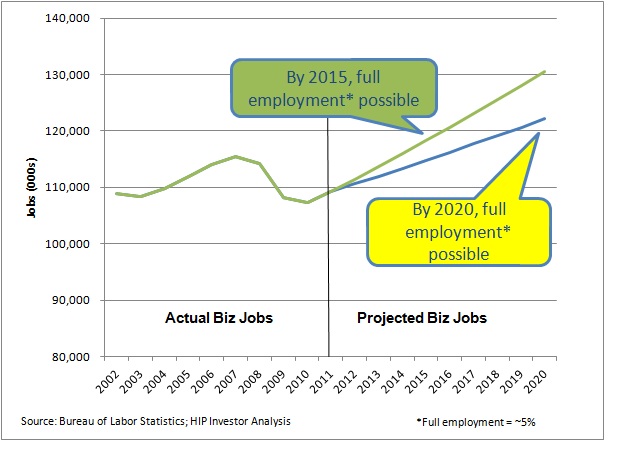 Going Forward: An Impact Economy that Can "Do Good," Create Jobs and Grow GDP

Every business person, policy maker, and politician dreams of strategies that will strengthen the U.S. economy and create employment opportunities. Solving society's problems -- either adopting a sustainability-oriented business strategy; or partnering with social-sector or government organizations -- can be embraced by business leaders, CEOs and Board members today to make a difference. If businesses focus on creating positive-impact products, solutions and ventures to solve pressing human needs, they have a greater chance of growing their revenue, attracting the best employees -- and stimulating job growth at the accelerated rate of the impact sector.

In the next parts of this series, we will highlight business strategies, new products and services, and corporate ventures that both "do good" and "make money" at the same time. This approach to job creation can enable a U.S. led resurgence of the global economy, drop unemployment, and potentially recreate the export-led economy of previous generations.

Tom Bowmer is a Corporate Financial Analyst with HIP Investor Inc., a Phi Beta Kappa fellow from the University of California at Berkeley, and an MBA from San Francisco State University.

NOTE: This is not an offer of securities nor a solicitation. The information presented is for information and education purposes, and does NOT imply any investment recommendations. Past performance is not indicative of future results. All investing risks loss of principal. The author, HIP Investor Inc. and HIP's clients may invest in the securities mentioned above, including in the HIP Portfolios. Details and full disclosures are at http://www.HIPinvestor.com