"There is only one difference between a madman and me. I am not mad." -- Salvador Dali

The romantic notion that mental illness and creativity are linked is so prominent in the public consciousness that it is rarely challenged. So before I continue, let me nip this in the bud: Mental illness is neither necessary nor sufficient for creativity.

The oft-cited studies by Kay Redfield Jamison, Nancy Andreasen, and Arnold Ludwig showing a link between mental illness and creativity have been criticized on the grounds that they involve small, highly specialized samples with weak and inconsistent methodologies and a strong dependence on subjective and anecdotal accounts.

Research does show that many eminent creators-- particularly in the arts--had harsh early life experiences (such as social rejection, parental loss, or physical disability) and mental and emotional instability. However, this does not mean that mental illness was a contributing factor to their eminence. There are many eminent people without mental illness or harsh early life experiences, and there is very little evidence suggesting that clinical, debilitating mental illness is conducive to productivity and innovation.

What's more, only a few of us ever reach eminence. Thankfully for the rest of us, there are different levels of creativity. James C. Kaufman and Ronald Beghetto argue that we can display creativity in many different ways, from the creativity inherent in the learning process ("mini-c"), to everyday forms of creativity ("little-c") to professional-level expertise in any creative endeavor ("Pro-c"), to eminent creativity ("Big-C").

Engagement in everyday forms of creativity-- expressions of originality and meaningfulness in daily life-- certainly do not require suffering. Quite the contrary, my colleague and friend Zorana Ivcevic Pringle found that people who engaged in everyday forms of creativity-- such as making a collage, taking photographs, or publishing in a literary magazine-- tended to be more open-minded, curious, persistent, positive, energetic, and intrinsically motivated by their activity. Those scoring high in everyday creativity also reported feeling a greater sense of well-being and personal growth compared to their classmates who engaged less in everyday creative behaviors. 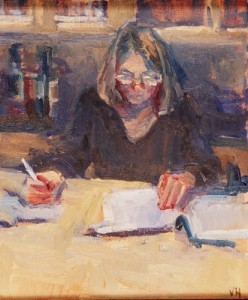 Creating can also be therapeutic for those who are already suffering. For instance, research shows that expressive writing increases immune system functioning, and the emerging field of posttraumatic growth is showing how people can turn adversity into creative growth.

So is there any germ of truth to the link between creativity and mental illness? The latest research suggests there is something to the link, but the truth is much more interesting. Let's dive in.

The Real Link Between Creativity and Mental Illness

In a recent report based on a 40-year study of roughly 1.2 million Swedish people, Simon Kyaga and colleagues found that with the exception of bi-polar disorder, those in scientific and artistic occupations were not more likely to suffer from psychiatric disorders. So full-blown mental illness did not increase the probability of entering a creative profession (even the exception, bi-polar disorder, showed only a small effect of 8%).

What was striking, however, was that the siblings of patients with autism and the first-degree relatives of patients with schizophrenia, bipolar disorder, and anorexia nervosa were significantly overrepresented in creative professions. Could it be that the relatives inherited a watered-down version of the mental illness conducive to creativity while avoiding the aspects that are debilitating?

Research supports the notion that psychologically healthy biological relatives of people with schizophrenia have unusually creative jobs and hobbies and tend to show higher levels of schizotypal personality traits compared to the general population. Note that schizotypy is not schizophrenia. Schizotypy consists of a constellation of personality traits that are evident in some degree in everyone.

Schizotypal traits can be broken down into two types. "Positive" schizotypy includes unusual perceptual experiences, thin mental boundaries between self and other, impulsive nonconformity, and magical beliefs. "Negative" schizotypal traits include cognitive disorganization and physical and social anhedonia (difficulty experiencing pleasure from social interactions and activities that are enjoyable for most people). Daniel Nettle found that people with schizotypy typically resemble schizophrenia patients much more along the positive schizotypal dimensions (such as unusual experiences) compared to the negative schizotypal dimensions (such as lack of affect and volition).

Advertisement
This has important implications for creativity.
Mark Batey and Adrian Furnham
found that the unusual experiences and impulsive nonconformity dimensions of schizotypy, but not the cognitive disorganization dimension, were significantly related to self-ratings of creativity, a creative personality (measured by a checklist of adjectives such as "confident," "individualistic," "insightful," "wide interests," "original," "reflective," "resourceful," "unconventional," and "sexy"), and everyday creative achievement among thirty-four activities ("written a short story," "produced your own website," "composed a piece of music," and so forth).

Recent neuroscience findings support the link between schizotypy and creative cognition. Hikaru Takeuchi and colleagues investigated the functional brain characteristics of participants while they engaged in a difficult working memory task. Importantly, none of their subjects had a history of neurological or psychiatric illness, and all had intact working memory abilities. Participants were asked to display their creativity in a number of ways: generating unique ways of using typical objects, imagining desirable functions in ordinary objects and imagining the consequences of "unimaginable things" happening.

The researchers found that the more creative the participant, the more they had difficulty suppressing the precuneus while engaging in an effortful working memory task. The precuneus is the area of the Default Mode Network that typically displays the highest levels of activation during rest (when a person is not focusing on an external task). The precuneus has been linked to self-consciousness, self-related mental representations, and the retrieval of personal memories. 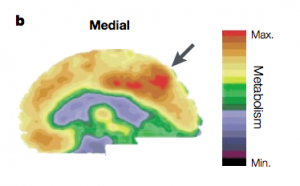 How is this conducive to creativity? According to the researchers, "Such an inability to suppress seemingly unnecessary cognitive activity may actually help creative subjects in associating two ideas represented in different networks."

Prior research shows a similar inability to deactivate the precuneus among schizophrenic individuals and their relatives. Which raises the intriguing question: what happens if we directly compare the brains of creative people against the brains of people with schizotypy?

Enter a hot-off-the-press study by Andreas Fink and colleagues. Consistent with the earlier study, they found an association between the ability to come up with original ideas and the inability to suppress activation of the precuneus during creative thinking. As the researchers note, these findings are consistent with the idea that more creative people include more events/stimuli in their mental processes than less creative people. But crucially, they found that those scoring high in schizotypy showed a similar pattern of brain activations during creative thinking as the highly creative participants, supporting the idea that overlapping mental processes are implicated in both creativity and psychosis proneness.

What is latent inhibition? Latent inhibition is a filtering mechanism that we share with other animals, and it is tied to the neurotransmitter dopamine. A reduced latent inhibition allows us to treat something as novel, no matter how may times we've seen it before and tagged it as irrelevant. Prior research shows a link between reduced latent inhibition and schizophrenia. But as Shelley Carson points out in her "Shared Vulnerability Model," vulnerable mental processes such as reduced latent inhibition, preference for novelty, hyperconnectivity, and perseveration can interact with protective factors, such as enhanced fluid reasoning, working memory, cognitive inhibition, and cognitive flexibility, to "enlarge the range and depth of stimuli available in conscious awareness to be manipulated and combined to form novel and original ideas."

Which brings us to the real link between creativity and mental illness.

The latest research suggests that mental illness may be most conductive to creativity indirectly, by enabling the relatives of those inflicted to open their mental flood gates but maintain the protective factors necessary to steer the chaotic, potentially creative storm.

Note: For much more on the real links between mental illness and creativity, I highly recommend the upcoming book "New ideas about an old topic: Creativity and mental illness," edited by James C. Kaufman, due out next year! I also recommend the following paper by Andrea Kuszewski: "The Genetics of Creativity: A Serendipitous Assemblage of Madness."