It is a truth universally acknowledged that men do not read or write romance novels... unless they are attempting to "cash in" or use phrases like bodice ripper or burning desire (for example: these two snarky gentlemen). However, according to statistics from Romance Writers of America, 9 percent of romance readers are guys. Who are the real men who read and write romance novels just because they like it?  I spoke with a few of them and about the portrayal of men in the genre, how people react to them, and how to make these books more appealing to dudes.

But wait -- what is a romance novel? Most people know them as the trashy books with heaving bosoms often found in back corners of bookstores or racks in the drugstore. The Serious Definition is a novel with a plot that centers around two individuals falling in love with an emotionally satisfying and optimistic ending.

Nora Roberts it the queen of romance. Books like 50 Shades of Grey are often an intro to the genre. But one guy romance author, Greg Herren, points out that what really makes a romance novel might not be what we expect -- and guys might be reading them already!

The great irony is men already read books with romance in them -- they just aren't called romance novels. If you take Robert Ludlum's The Bourne Identity, flip it and tell it from the woman's point of view, it would have been published as a romantic suspense novel and would have had a completely different cover, a different marketing plan... but really, Jason Bourne meets a woman, she goes along on his big spy adventure, and they wind up together, with a happily ever after on a Carribbean beach at the end....

The most common response when learn a guy is a fan of romance novels is surprise. It echoes my own experience of that one time I saw a guy browsing the romance section of my local Barnes & Noble. It was an unexpected sight, but one I was pleased to see. However, the response isn't always a simple "wow!"

"I've only had one person respond with disdain when he learned what I write," says reader and author Jim Cangnay.  Another author, Max Vos, also gets a surprised look and, he adds, "When I say that I write male/male romance it gets a little more interesting. Women often want to know more. Men often just nod and that's the end of it."

I chatted with Iain, who shares romance novels with his girlfriend and he says it's usually not something he feels comfortable bringing up, but when he does he gets a reaction of "surprise, amusement, curiosity -- only very occasionally have people responded as though I were weird to be reading RNs."

"When I was a kid, I did have to hide that I read books my father considered 'girl's books,'" says Herren. These days he's not hiding and has adopted the point of view of a friend who believes we "we shouldn't feel guilty about anything we truly enjoy."

Romance novels are often dismissed as guilty pleasures and something to be ashamed of by both men and women. In fact, as a woman, I often notice people are surprised to learn that I, with my two English literature degrees, write romance novels. While guys reading "girls books" confounds our gender expectations and may lead to an extra element of surprise and snark, it seems that attitude often just comes with the genre -- no matter who is reading it.

The heroes in romance novels have a reputation for looking like Fabio or a model in an issue of Men's Health magazine. They also tend to be ridiculously wealthy, all powerful, mindblowingly awesome in bed, incredibly intelligent and a savior in a crisis. It's a lot for anyone to live up to.

One reader, Richard, has noted a discrepancy in the portrayal of heroes and the pressure of them to Be All Of The Awesome, All Of The Time: "Most of these "dastardly-rakes" which are supposedly so villainous in the romance novels are all amazingly heroic right from the get-go.  With hero types like that... particularly the rich, good-looking, well-built and strong, charming, hard-working, moral, who were excellent lovers to half of London and then settle down for the Heroine, one has to think keep dreaming, author."

On the other hand, Iain weighs in on how realistic romance heroes are: "I think that the male characters are probably a lot closer to 'real' in RNs than female characters tend to be in a lot of other genres. They're real people -- they've got their talents and their failings, their hopes and their dreams. They aren't (at least, not in the books I've read) just a rippling chest for the heroine to cling to."

With thousands of romances published each year, there's something for everyone.

It was bound to happen: a discussion of feelings. Cue eye rolling -- or not? One reason women often cite for the genre for being looked down on is because they do deal with the messy complexity of human emotions. It might be one reason that guys shy away from these stories. Or is that just another gender stereotype we -- especially female romance authors -- are perpetuating?

Richard the reader points out: "But I can't help but feel the "I'm a man and have no feelings" trope is over played. Characters having a fear of the word 'love' seems over-dramatic."

On the other hand, men are often told to keep their feelings to themselves. The portrayal of emotionally reserved heroes -- especially in historical romance -- might be reflective of the culture and not just an overused plot device.  Vos points out: "When a woman asks a man how they feel, well hell, they don't know because they've been told not to feel for so long they don't know how to express themselves. It isn't that men don't feel emotion, but they have been taught how to tamp it down and not let it show."

It's worth noting that most romance novels are written in the third person, giving the reader to get into the head of both the heroine and the hero. It all begs the question: if women's fantasy includes men who feel deeply and communicate about it, how and why are real life men conditioned otherwise? Vos notes, "I'm starting to see this trend being strayed from, but only slightly."

How can romance novels be more guy friendly? Should they be?

What do guys love about romance novels? Herron says, "The same thing I love about any novel -- good writing, strong characters, a good story." But are there ways to make these books more appealing to guys?

It could be as simple as "more male POV romance stories would attract male readers," according to author Michael Molloy. Or more sports-themed romances. Cangany points out "sports romance give guys plenty of opportunity to check out a romance while staying on familiar turf. Guys just need to be willing to try something different."

Check out the slideshow below of recommended romance novels for guys -- including sports themed stories.

It might a take a little education and broadening of horizons, too. Iain says, "It's not just misogynistic jocks who laugh at romance novels, there's plenty of supposedly liberal, feminist guys out there who'd never even consider picking a romance novel up because of what they think it is. They need people to sit them down with a good romance novel -- and that's my job as well, as someone who knows the truth -- and make them give it a chance."

Dare we suggest that the genre become less girly? Are we, the 91 percent, keeping out a potential readership with all the PINK! And naked man chest! And girly words! And MORE PINK! Vos says: " I think most men shy away from the word romance. Find a way to promote it without using that word and you may have a chance." Similarly, Ron Hogan, blogger and co-founder of Lady Jane's Salon (a national reader series devoted to romantic fiction) adds, "I mean, there's the obvious "solutions," like making the covers and/or the titles less "romance-y," but at what point do you risk losing the existing audience by diluting the presentation"

But the matter of who reads romance may be about more than pink or sports. "I think the only way men are going to start reading romance novels in greater numbers is if the genre itself is destigmatized," says Herren.

The romance audience is keenly aware of their outsider status -- while the genre generated $1.4 billion in sales in 2012 and was the top performing category on the bestseller lists, it doesn't get the same coverage in the media as literary books do (amiright, Jennifer Weiner?). The books are called "trashy" or "guilty pleasures" with the implication that no one -- male or female -- should really admit to reading them.  (Here's a short video showing why). But fans of the genre know that there's no shame in enjoying a rollicking good story where men and women find common ground and live happily ever after. Cangany sums it up perfectly: "It's the story that matters." 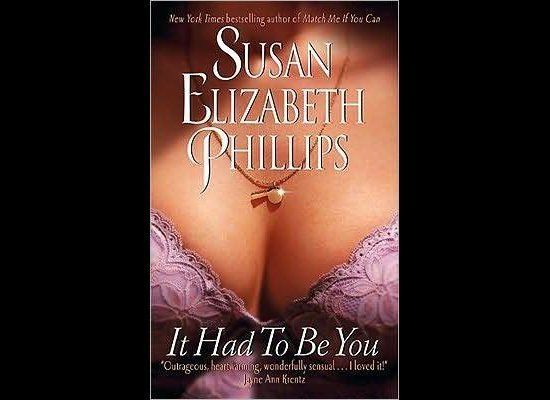 1 / 5
It Had To Be You by Susan Elizabeth Phillips
<a href="http://amzn.to/MKtccj" target="_blank"><em>It Had To Be You</em></a> is the first novel in Susan Elizabeth Phillips' Chicago Stars football series. What if a woman who knows nothing about sports inherits a professional football team? The Windy City definitely isn’t ready for Phoebe Somerville, the outrageous York knockout who’s taking over their home town team. And Phoebe is definitely not prepared for the Stars’ head coach Dan Calebow, a sexist jock taskmaster with a one-track mind. This is the book that began it all. The Chicago Stars are about to take the field…and they’re not the only ones playing for keeps.