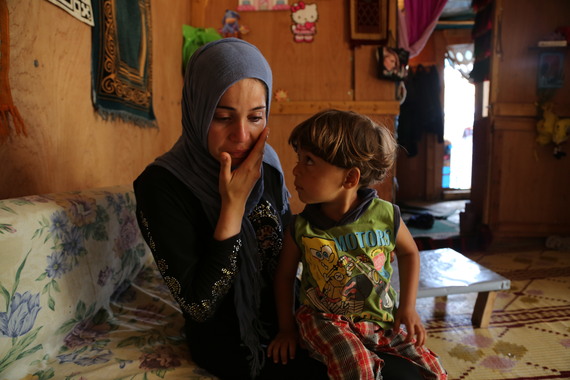 Over the past few weeks, major news outlets like the New York Times, the BBC and the Associated Press have featured haunting images of Syrian families--mainly women and children--seeking refuge in Europe. People worldwide are horrified, and they should be. As journalist Nick Kristof put it in an op-ed published yesterday, "If you have a heart, you're moved by the refugees."

So what's driving this migration of Syrian refugees? The answer, of course, is a complicated one. But as Kristof and the New York Times Editorial Board have recently pointed out, deteriorating conditions for refugees across the Middle East have played a major role. Faced with swelling demand and dwindling budgets, United Nations agencies on the ground are struggling to provide enough food, water and medical care for the number of Syrians in need.

The U.N. World Food Programme (WFP), for example, has been working to feed families in Syria and neighboring countries like Egypt, Jordan, Lebanon and Turkey since the conflict began in 2011. Since then, more than half of the country's population has been displaced by warfare. After five years of fighting, the agency now finds itself providing food assistance to nearly 6 million Syrian refugees each month with no end in sight. Meanwhile, severe funding shortfalls have led to dramatic cuts to its program. In July, the agency halved the value of its electronic food vouchers in Lebanon to just $13.50 per person per month.

And the refugee crisis is not just confined to the Syria conflict. Right now, the U.N. is facing five large-scale humanitarian catastrophes at the same time, four of which are manmade. Violence in nations like Yemen, South Sudan and the Central African Republic, among others, has left millions of families hungry and homeless. According to UNHCR's annual Global Trends Report, global displacement is at an all-time high. A staggering 59.5 million men, women and children are living as refugees or internally displaced people. If the total number of refugees were its own country, it would be the 24th largest in the world, just behind Italy.

These disasters have put incredible strain on the U.N. and its humanitarian agencies. Last year, the U.N. requested a total of $19.5 billion to adequately address global needs--the highest estimate in its 70-year history--yet received just 60% of that amount.

But to be clear, it's not that governments, private companies, religious institutions or citizens don't care. In fact, it's quite the opposite. In 2014, total international humanitarian aid rose for the second year in a row. But the reality is that need continues to outpace resources--despite a record increase in contributions.

No doubt these cuts have helped drive more refugees to flee to safer, more resource-rich regions like Europe. Given the choice between eking out an existence in makeshift tents, overcrowded camps, and substandard housing, where adequate assistance, employment and education for their children seem increasingly out-of-reach, or risking life and limb to reach the shores of Europe in the hope of a better future, Syrian refugees are increasingly choosing the latter. Case in point: Over the past two years, Syrians have accounted for the largest percentage of asylum-seekers in Europe and their numbers are rising--63% of the 160,000 people who have arrived in Greece so far this year came from Syria. But as WFP staffer Dina El-Kassaby told The Guardian today, most Syrian refugees can't even afford to make the dangerous trek to Europe. Instead, some refugees living in Jordan and Lebanon are actually choosing to return to Syria, an active war zone.

It's not just refugees who are being affected by this "new normal" either. These funding challenges mean agencies like WFP have to make excruciating choices about who to feed and who must fend for themselves. Over the last year, WFP has been forced to reduce food rations to the hungry in places such as Kenya, Uganda and the Democratic Republic of Congo. As more resources have been shifted toward addressing refugees, impoverished communities across the globe have suffered. This includes small-scale farmers in developing nations who need assistance--in the form of better seeds, soil nutrients, planting advice and financial credit--to successfully grow enough food to feed themselves and their neighbors. The same can be said of students in the world's poorest classrooms who rely on school meals from organizations like WFP as their sole source of steady nutrition. Those programs are getting cut too.

The capacity exists to address these humanitarian needs. It's just a matter of marshaling the resources and political will to get the job done.