Anyone who is in any way surprised by Sarah Palin's announcement today that she will not be seeking re-election, and, even more significantly, is stepping down as Governor of Alaska, has not been paying close attention. The signs have been everywhere.

Palin has absolutely zero interest in running the State of Alaska. She steadfastly refused to live in Juneau after her first year there, had the gall to charge the state for residing at her home in Wasilla 600 miles away, and she basically mailed in her performance as the state's top administrator during Alaska's most recent legislative session. She has alienated virtually all the key legislators in her own party -- that's right, Republicans -- and had failed to move any key legislation forward since her return to Alaska from the national campaign trail last November.

In fact, her bizarre appointment for Attorney General, Wayne Anthony Ross, was rejected nearly unanimously by the state legislature -- a first in Alaskan history. Even in respect to energy policy, her supposed bailiwick, she has been categorically ineffective. When I asked those in-the-know what role Palin had played in putting together the recent pipeline deal between TransCanada and Exxon, their response was simple: "None."

None. That about sums up Palin's accomplishments as Governor of the Last Frontier.

The evangelical right can wallow in denial all they want about Palin being victimized by liberals or Democrats or even George Soros (some illiterate wingnut recently tried to link me to him), but the fact is that most of the people with really bad things to say about Palin -- from John McCain's staff to conservatives in Alaska -- come from the Republican Party. The charges of a left-wing conspiracy are so ridiculous as to be absolutely absurd.

But then what coming from the Palin camp isn't?

Moreover, Palin was facing what would have been a hugely embarrassing veto override by the Alaska legislature at the beginning of the next session in January over her politically postured refusal to accept Federal stimulus funds. If this past legislative session was a setback for Palin, the upcoming session would have been an absolute public relations disaster -- hardly the proper entree for her presidential campaign.

My sources in Wasilla tell me that Palin's father, Chuck Heath, has spoken repeatedly about the "liberal press" and dreaded "bloggers" taking their toll on his daughter. I recently discovered an early, telling email by Palin complaining to her pal Meg Stapleton about something a blogger had written in the Anchorage Daily News and how significantly it bothered her -- "kind of makes my stomach turn over," she wrote. Palin can dish, but she can't take it. She's got a terribly thin skin. When I reported here less than a month ago that Palin had clearly lifted passages from an article by Newt Gingrich and Craig Shirley (whose name she didn't even bother to mention) she and her entourage went apoplectic. What she had done was blatantly obvious and she would have been tossed from any reputable college or university for such slipshod citation. Palin, and the sycophants with whom she surrounds herself, simply have no moral compass.

Some pundits have said that Palin's resignation is out of character. Hardly. Don't forget that she resigned from her last statewide office -- that as chair of the Alaska Oil and Gas Conservation Commission. Sarah Palin is a quitter. She fancies herself something else. But, in the end, she quit her position at AOGCC and she has now quit her governorship. That's two-for-two at the statewide level. In Wasilla, there was nearly a recall launched against her as mayor. Trouble and turbulence have followed her everywhere.

More importantly, there are rumors in Alaska that more Ethics Act charges are in the works and that there is also a more serious Federal investigation focusing on Palin during her tenure as mayor in Wasilla and the building of her home and a sports complex in Wasilla, long speculated to have been linked. It's the one very touchy subject whenever you bring it up in the MatSu Valley. As someone who is writing a book on Palin, I can attest to the fact that there are always rumors flying about her, not all of them true, but this seems like a real possibility, especially given the timing of her announcement today.

Palin also has a multi-million dollar book project for Rupert Murdoch that she needs to complete in time for a spring release. That's some serious cabbage, and there were grumblings in Alaska about the book deal as well. There will be other lucrative, high-visibility media options for her shortly down the road. Don't be surprised to hear of one of those popping up soon. This frees her up to reach for the gold ring without her minions being able to register any complaints. In that respect, it's a logical move.

A longtime Republican in Alaska who has known Palin since she ran for lieutenant governor in 2002 told me that Palin "enthusiastically embraced" her trip to Georgia last year in which she campaigned for Senator Saxby Chambliss. She sees herself doing that around the country in 2010, raising money for conservative Republicans and, by so doing, building support for a presidential candidacy in 2012. "She was absolutely adored in Georgia," said the GOP operative, "and she loved her role there --preaching her particular brand of conservatism to the already converted." And make no mistake about it: Sarah Palin is by far the biggest ticket item that GOP has in its dwindling catalog of candidates. 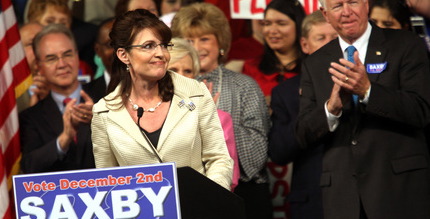 All of the recent public donnybrooks have taken their toll: First the article by Todd Purdum in Vanity Fair and then the even nastier revelations of emails leaked by the McCain campaign which showed her to be an utter liar regarding her husband Todd's membership in the Alaska Independent Party. Even the seemingly innocuous interview in Runner's World, with its bizarre, braggadocio boast of her having more endurance than Obama, revealed her penchant for duplicity at every turn: the assertion that an injury she had sustained while jogging in Arizona had been kept top-secret, a contention thoroughly disputed by the inimitable Mudflats.

One of my favorite lies spewed by Palin today in yet another poorly scripted speech was that she campaigned for governor "four years ago...," when she, in fact, ran for governor three years ago and held her position for little more than two-and-half years. It's the little lies she always tells, the twists of truth, the distortions. Four years sounds like nearly a full term; three feels incomplete. So why not just call it four?

For all her projected toughness, Palin loves to play the victim. "Political operatives descended on Alaska last August, digging for dirt," she whined, implying that her problems are from out-of-state (yet another big lie). "Over the past nine months I've been accused of all sorts of frivolous ethics violations..." It wasn't quite Richard Nixon's "Checker's Speech," but it was close. In her own awkward vernacular, the Governor was essentially saying to Alaska, "You won't have Sarah Palin to kick around any more."

Here's a little bit of Alaska inside talk for you. Those close to the governor have consistently indicated to me that they privately blame Mitt Romney & Co. as the source of a lot of the media hits on Palin. It may even be true. But with today's announcement, Palin will soon be on equal footing with Romney -- no longer saddled by statewide office and free to travel and maneuver however and wherever she damn well pleases. Today's statement was a great equalizer for 2012.

By being a lame duck, Palin would have exposed herself to more negative coverage, more public failure. By stepping down she allows herself to regroup, get out from under the microscope and re-emerge as a national figure without the constant strain of serving as governor.

Some news sources are claiming that Palin is stepping away from politics permanently; perhaps. But I didn't hear that today. What I heard were typical Palin code words that she has her ambitions set for higher office, for a national stage. Her shots at Obama's stimulus package were just one of many signals aimed directly at Washington.

So do not think for a moment that this is the last we will be hearing from Sarah Palin. The Federal Election Commission will soon be reporting how much money Palin's SarahPAC has raised over the past four months. You can bet that Palin has a lot of gas left in her tank. She is the gift that John McCain gave us that will not go away.

Award-winning investigative journalist and documentary filmmaker Geoffrey Dunn is at work on a book about Sarah Palin and her role in American politics, to be published by Macmillan/St. Martin's in 2010.