"Southside With You" is a charming, witty, and heartwarming movie of the Obamas' first date. My wife Jo and I saw them that night, and the movie has two characters based on us, a couple who run into Barack and Michelle at a movie. This is what really happened.

In more than 35 years of teaching and serving now as dean at Harvard Law School, our daughter Martha Minow called me only once to recommend that our law firm recruit one of her students as a summer intern. "I know you don't normally bring on first year students for your summer program at Sidley Austin," she said, "but this one is truly exceptional, and he wants to work in Chicago this summer." I asked, "What's his name?" "Barack Obama," she answered. I replied "Wait a minute, I need to write that down, and you'll have to spell it for me."

I called John Levi, the head of our firm's recruiting, who also oversaw the summer program for law students, and discovered that Barack Obama had already been hired. Levi had interviewed him and offered him a place in our 1988 summer associate program.

"I know you don't normally bring on first year students for your summer program at Sidley Austin," she said, "but this one is truly exceptional..."

We assign lawyers in the firm to supervise the summer associates, and Levi selected one of our most promising young lawyers, Michelle Robinson, to supervise Barack.

I wanted to welcome him to Sidley, and I was curious to see what impressed Martha, so I invited Barack to stop by my office and have lunch. And we worked together on a client's case.

I could soon see Martha was right. Her student was truly exceptional.

Later that summer, my wife Jo and I went to the theater at Water Tower Place in Chicago to see the Spike Lee movie, "Do the Right Thing." We walked into the theater and saw Barack and Michelle buying popcorn at the concession stand. It was their first date.

They were startled and embarrassed, because she did not want anyone in the office to know they were seeing each other outside of work. They thought a supervisor should not be dating a summer associate. Jo and I reassured them that there was no problem, and we went in together to watch the film.

At the end of the film (spoiler alert!) they share their first kiss at the Hyde Park Baskin-Robbins. My wife, Jo, loves that part of the story because her maiden-name is Baskin and she is very proud of her cousin who co-founded the chain.

Barack was everything my daughter said, and we were eager to have him join the firm. But it was clear his ambitions were in a different direction.

They were startled and embarrassed, because she did not want anyone in the office to know they were seeing each other outside of work.

So I was disappointed but not surprised when Barack came to see me to tell me he would not be accepting our firm's offer of a job after he graduated from law school. We were both standing in my office. Then he said, "You'd better sit down for the next part." I looked at him warily and we both sat down. "I'm taking Michelle with me."

"We're getting married," he told me. I wished them great happiness and we stayed good friends, with concerts at Ravinia and many lunches over the years.

A few years later, I was asked to recommend Barack for a national award. I wrote, "I cannot tell you what this young man will do, but I can assure you he will one day achieve national leadership." 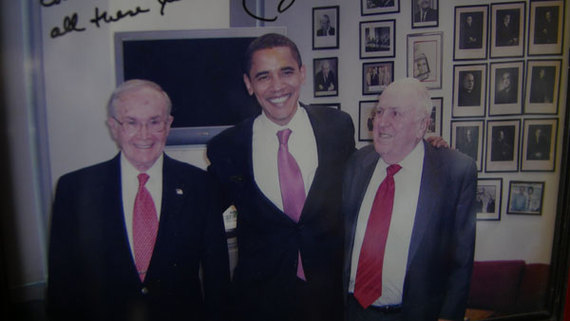 In 2006, I wrote an op-ed for the Chicago Tribune urging him to run for president. I said he combined a first-class temperament with a first-class intellect. Later that year, he asked to meet with me and with my lifelong friend, the late Abner Mikva, because he was deciding whether he was ready -- and he country was ready -- for him to run. His most important question was whether Ab and I, each the father of three spectacular daughters, thought he could be a good father if he campaigned and was elected president. We told him he would see more of his daughters as [resident than he did as a senator, and I thought of that conversation many times as I read about the Obamas' nightly family dinners in the White House.

"Southside With You" is a lovely film, touching and romantic. For Jo and me, it was a pleasure to see it on a whole different level as it brought back memories of Barack and Michelle when they were young and so full of promise. Seeing the graciousness, elegance and integrity they brought to the White House has more than realized that promise, and we will miss having them there.

Michelle and I were both born on January 17. This year, I turned 90 and Barack called to wish me a happy birthday. I thanked him, and asked him to give Michelle my birthday greetings, too. I told him how proud Jo and I are of them both. They have set an exceptional example for the nation of high standards, a loving marriage, devoted parenting and strong family life. And if they ever decide to return to the practice of law, we would be happy to welcome them back.

Thanks to my daughter, Nell Minow, for suggesting I share these memories.